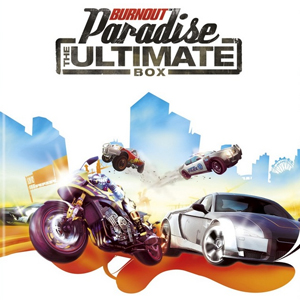 The best version of the best game in the Burnout series...

Burnout has always been known for its heavy, destruction-filled car racing. With the latest installment, Paradise, gamers were stunned by Criterion\'s open-world racing and frequent free content updates. Fortunately, EA decided to expand the franchise\'s audience, bringing the game to the PC in the form of the Ultimate Box, a platform first for the series. The result is a beautiful and fun value-filled package that every PC racing fan should consider adding to their collection.

The challenges that populate Paradise City boil down to five basic archetypes named: Normal race, Road Rage, Burning Route, Marked Man, and Stunt Run. Road Rage is a sort of deathmatch mode that forces you to use the environment in order to smash enemies into obstacles and traffics, Burning Route boils down to a set of consecutive time trials, Marked Man has you racing for the finish line before your car is totaled by enemies, and Stunt Run has you chaining boosts, jumps and drifts to pull off combos. There are a few other distractions like Showtime Mode, and they really add to the variety of the experience.

The sheer amount of content in the Ultimate Box is staggering, especially when combined with it\'s lower-than-average retail price. There are dozens of missions and cars that populate Paradise City. The Ultimate Box builds on the original\'s content by including previously downloadable content like Codename: Cagney, the Bikes pack, and Burnout Party, automatically making this version the best buy of the three platforms, value-wise. Burnout Party is the most gameplay-significant addition, integrating a pass-the-controller type of multiplayer that has you and your friends competing in a series of minigames (stunts, skill, and speed) and earning points to outscore one another.

The online mode, in the vein of Grand Theft Auto IV, is seamlessly integrated into the game world and is only a button press away. The two main options are races that you can set up between any two points of the city, or Freeburn Challenges. As with the rest of the game, there are a wide variety of challenges that ensure that you will never get bored and will always find something fun to do with your friends.

Visually, Paradise was a good-looking experience on the consoles and the PC version is definitely no exception. The engine is very well optimized, meaning that you\'ll be racing down the streets of Paradise City and causing special-effects-laden destruction with buttery-smooth framerates on midrange hardware. The audio is realistic, bringing out the sounds of the city and accurately recreating the whines and hums of the game\'s wide selection of cars. The music is less exceptional, but quality stand outs like Guns N\' Roses and Faith No More
help stem this weakness.

In short, the Ultimate Box is the Ultimate Burnout experience. While owners of the previous versions won\'t find much of a reason to get this, newcomers to the series should definitely be encouraged to check out this all-around quality package.

Gameplay: 9.0 – Solid racing mechanics are combined with a cornucopia of quality challenges and game types that ensure most players will find something to like.

Presentation: 9.0 –  Paradise City and the vehicles populating it are well-realized and modeled.

Value: 9.5 – Burnout Paradise is chockful of options, cars, modes, and experiences. Getting three DLC packs in the package doesn\'t hurt, either.

Final Score: 9.0 – Burnout Paradise is a must-have experience for those looking for some vehicular mayhem and maximum bang-for-the-buck.