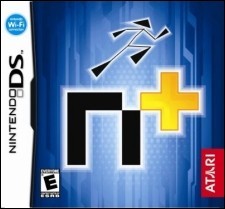 Many of you have probably already heard of N, a free flash game starring a little black ninja and a whole lot of enemies out to kill him. Now developer Metanet Software has teamed up with Atari to bring you N+, an updated version of the game on the DS for only 20 dollars.

N+ has a simple premise: you’re a ninja with a short lifespan in search for gold who has to avoiding robots. But no one is going to play this game for the story. Instead, they’re going to become engrossed in the more than 200 levels available. Each level has a simple goal: activate a green switch and then find your way to the exit. Sounds too easy? Try doing that while collecting as much gold as you can and dodging tracking lasers and heat seeking missiles. Your task is made harder by your lack of weaponry and extreme weakness. Every enemy, and even just falling from a great height, will kill you in one hit.

So how do you overcome these insurmountable odds? Don’t forget that you’re a ninja, and ninjas are, by definition, pure awesome.  Your main weapon is your agility. You can run and jump with great speed, and everything is modeled with a great 2D representation of momentum. You also have advanced techniques such as sliding down walls or jump kicking off them at your disposal. This game requires fast reflexes and a tremendous amount of patience. While you have unlimited lives to retry any level, you will die a lot. As in, more than any other game you have ever played. Guaranteed.

N+ also includes some local multiplayer competitive and cooperative modes, as well as a map editor, but I found them to be unnecessary. Most of my time was spent dying. And dying. And dying. But hey, it was fun.

The amount of fun you get out of N+ is directly proportional to your skill and patience. While there are tons of levels, they are grouped in sets of 5, with 5 sets unlocked at a time. This is perfect for sporadic, on the go gaming. Every time you complete a batch, another 5 sets are unlocked, but if you can’t finish the early levels you’re not going to get to see the later levels. There’s no way to skip straight to the later levels, at least not without cheats (not that I would know). N+ is an extremely punishing game with little room for error, but when you beat a level, you feel like a true ninja. For only 20 dollars, fans of the internet version and people who want a game that’s fun in small doses are encouraged to pick it up.

Gameplay: 8.5 – This is everything from the online game, only better. If you like a very difficult 2D acrobatic challenge, this game is for you.

Presentation: 8.0 – It’s easy to access the levels and they transition smoothly from one to another. They should have unlocked all levels from the beginning, though.

Sound: 7.0 – Practically none, just a lot of splats and explosions when you die. They missed the opportunity to add some cool music.

Value: 8.0 – Mileage may vary. If you’re patient or have the necessary skill, this can last a long time. But casual gamers will get turned off very quickly. Once you beat it, there’s nothing to do except replay the levels. However, it is only 20 bucks.

Final Score: 7.9 – N+ is a great adaptation of the online game. I recommend you try that for free, and if you like it, buy this version for some portable goodness.