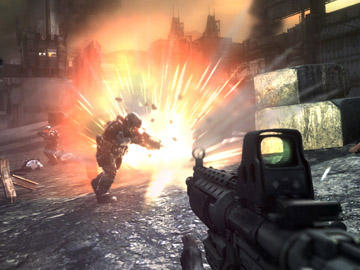 It seems that we\'ve got a newcomer in the top console fps category...

As a purely PC gamer for the majority of my life, I looked upon the advent of the First Person Shooter genre on the consoles with scorn and indifference. Sure, I enjoyed the occasional match of Halo with my friends, but there was no game exclusively for the consoles that made me say "I need to play that." Then, at E3 2005, the infamous CG trailer of Killzone 2 piqued my interest. I couldn\'t believe the quality of the presentation and level of activity happening on screen. I was a skeptic, until the E3 2007 reveal. Since then, I\'ve been following the game intensely, intrigued at finding out what Guerilla Games can do given the PS3\'s limited (now 2-year-old) hardware. The recently released demo was my first hands-on with the game. My impressions?

For a game to truly amaze me, it has to immerse me in its world. More often than not, shooters set in epic universes filled with grand battles fail to implant me in their universe due to the developer’s fear of or inability to set up epic set pieces and scripted events. While I thoroughly enjoy the open-world freedom of choice available in games like Crysis, there will always be a small place in my heart for linear, fast-paced experiences. Up to this point, the Call of Duty franchise has come closest to offering gigantic, pulse-pounding experiences that make me feel as if I’m on a chaotic, authentic battlefield. Judging from the demo, Killzone 2 looks like it’ll finally capture the same feeling, with a little sci-fi mixed in.

From the start, you’re thrown into a high-risk troop landing on a Helghan beach (Call of Duty veterans and World War II aficionados might notice a parallels between this and a certain historical battle involving a certain French coast). Flak is exploding in the air, your fellow soldiers are yelling, allied dropships are being blasted apart, and screaming soldiers flash past as your landing craft dives in for a crash landing. This in-engine, first-person “cutscene” ends quickly and the game hands you the controls. As players advance along the beach, they’ll notice the incredible amount of detail and activity that Guerilla put into the battlefield. Medics run up to assist wounded comrades and scattered dropships zoom by overhead while an unfortunate soldier screams and flails as fire spreads over his uniform. In the meantime, Helghast troopers are calmly firing down at you from high vantage points.

For a Playstation 3 game, the technical attributes of the visuals are truly impressive. Motion blur, lens flare, and film grain add up to make a film-like experience that expertly hides some of the limited aspects (like environmental textures and aliasing issues) that PC gamers with experience playing games like Crysis and Empire: Total War might notice and nitpick about. However, for console-only players, Killzone 2 comes closer to looking like quality pre-rendered CGI than any other game before it, and probably any other releases in the near future.

So, Killzone 2 looks great, but how does it play? If the demo is any indication, pretty damn well. The movement controls have a strange feeling of “lag” that results in slower than average movement that speeds up a bit the longer the stick is held in a specific direction. This adds a sense of weight rarely seen in other shooters that further adds to the immersion: no longer are you a floating gun in the game world, you are a real soldier who has the added weight of his armor and weapons to deal with when moving around the battlefield.

Gameplay-wise, the demo doesn’t seem to do anything particularly innovative, but seems to polish standard shooter conventions almost beyond a fault. The action is methodical, and punishes run-and-gunners. Like Gears of War or Rainbow Six, you’ll have to advance carefully through a combat zone, sticking to walls using the first-person cover mechanic. Firing from the hip is authentically inaccurate, encouraging the use of looking down the sights like few games have before. The Helghast, even on the demo’s only difficulty setting (Soldier), are intelligent enemies that use cover, grenades, and flanking tactics to flush out both you and your AI-controlled allies. All of these aspects added together mean that Killzone 2 is less arcade-y than what the majority of dev teams are pulling off. Seeing such an unabashedly hardcore game as a big-budget console exclusive is quite a welcome change.

However, there are some minor complaints: namely, the dialogue of certain characters. (I think I heard fewer swear words uttered in the entire Gears of War campaign than I did in this one demo level). Also, the demo ends quite abruptly.. The latter won’t be a problem in the final game, but the former might put off many players who are looking for a shooter that takes itself seriously and doesn’t resort to lowly tactics to increase its “badass” factor. However, these complaints seem rather tame in comparison to the quality and fun level already present.

First impressions are usually the most telling. And from the experience that the demo provides, it seems like Killzone 2 just might be the triple-A shooter that Sony needs to compete with Microsoft’s big guns.