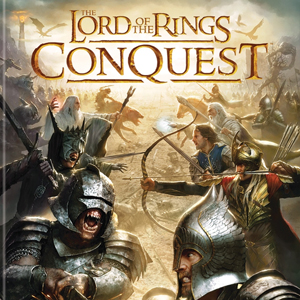 Licensed games. They are what many call a blight on the otherwise bright creativity inherent in the games industry. Some licenses consistently fall flat, with every game failing to ignite interest from critics and the rest of the public. Some manage to produce the occasional gem. Fortunately, the Lord of the Rings is one of these. The Lord of the Rings Online MMO and Battle for Middle-Earth RTS games have managed to carve out small, dedicated niches in the growing market, taking many by surprise for their interesting interpretations of Tolkien\'s Lore. So when EA announced that Pandemic was going to be making a Star Wars:Battlefront-esque game in the universe, many awaited it with cautious optimism. The game released mid-January: did Pandemic make up for its horrifically average last effort: Mercenaries 2, or is The Lord of the Rings: Conquest a blemish in the history of the franchise?

The specifics of gameplay are pretty simple to understand, especially if you\'ve played the Battlefront or similar Battlefield games. The main gametype (Territories) has two opposing teams (Good and Evil) duking it out over a web of control points. The more you control, the less spawn points are available. Each time somebody dies, the team loses a ticket. Whichever team runs out of tickets first is declared the loser. It\'s a mechanic that is easy to get into, but not particularly innovative. There\'s also a hero mode, which has the game\'s arsenal of good and bad heroes duke it out in what becomes a mindless button-mash.

Battlefront worked because its universe fit the mold of its gameplay mechanics, allowing snipers to cover assault teams while engineers repaired tanks that retreated after being damaged on the front lines. The Lord of the Rings universe, although awesome, just doesn\'t fit these philosophies. One example: Creatures are "vehicles" that stand around and wait for people to mount them. This simply ruins any sense of scale and authenticity that one might have pretending that they\'re actually fighting in one of the epic scenes from the films. Like Battlefront, there are several different classes with different abilities, but the difference here is that they are incredibly restricting in a way that irritates. For example, why is my archer instantly defenseless when enemies get within two feet of me? In addition, the optional first person perspective is nonexistent, resulting in some clunky ranged combat.

In what is a troubling sign for a multiplayer-focused game, the single player is the more entertaining aspect of the package. The War of the Ring follows the path of good with you participating in some of the greatest battles from the movies and books. The real highlight is the Rise of Sauron, which deals with the terrifying scenario of Frodo failing to destroy the ring, resulting in Sauron coming back to power. The levels and cutscenes that result are really interesting and satisfying to go through. The final level, in particular, is extremely bold and sinister.

Unfortunately, the campaign also has some glaring issues. Enemy AI always gun for you, resulting in some frustrating battles in which you\'re surrounded by dozens of guys who are ignoring the teammates that are less than twenty feet away from you.

In general, the game tries but fails in the presentation category. The audio draws upon the same licensed sounds and music that you\'ve come to expect from Lord of the Rings games, but it is combined with visuals that are simply ugly and were obviously rendered on up-scaled last-generation engine technology. Character models are blurry, textures are nonexistent at times, there are a limited set of animations, etc.

Lord of the Rings fans might have some fun battling through half-decent renditions of famous battles, but Conquest will leave the rest of us wondering what kind of plague fell upon Pandemic this generation...

Gameplay: 7.0 – Sure, it builds on Battlefront. But is Lord of the Rings really the right license for this style of gameplay? There are also some serious AI issues in both single player and multiplayer.

Presentation: 7.0 – It tries to recreate an authentic Lord of the Rings feeling, but simply fails due to some serious technical issues.

Sound: 7.5 – Draws upon the expected library of movie sound effects and music... Does nothing interesting or new.

Value: 7.0 – While there is a lot of content to play through, players will be frustrated by its lackluster presentation and presence of serious bugs.

Final Score: 6.8 – Only consider Conquest if you really can\'t resist more Lord of the Rings action.