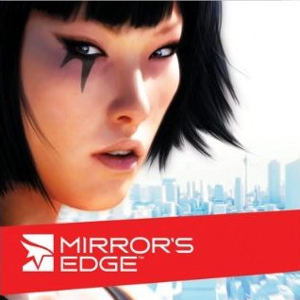 A bold new direction for both the first person genre and platformers...

DICE is best known for its insanely popular multiplayer shooter series, Battlefield. Battlefield is loved for its wide-open environments and high player counts, an experience that other shooters are often unable to replicate successfully. Although DICE has continued to make new forays into the Battlefield franchise such as Bad Company and Heroes, many were surprised when they announced that they were working on a completely new IP that would attempt to be a first person platformer. Many doubted DICE could pull off what nobody else had managed to do before, but the game ended up being released anyway. So, does DICE\'s experiment succeed in doing what so many thought impossible?

From the start, Mirror\'s Edge (ME) leaves an impression of uniqueness. Set in a pristine, near-future metropolis, ME presents a world that stands in sharp contrast to the dull, dark and brown settings that developers seem addicted to. It\'s a breath of fresh air, and it helps sustain an experience that some might have found to be not worth their time. You play as Faith, a messenger of sorts, whose daily hijinks consist of carrying messages between rebelling forces in what seems to be an area under oppressive rule. Your daily adventures are interrupted by the assassination of a rebel-sympathetic candidate for mayor. It just so happens that your sister (who works for the same security forces that chase you) was framed for the assassination. The plot builds from there. Unfortunately, the narrative is not one of Mirror Edge\'s strengths. Characters have little to no personality, important plot points are communicated through mediocre animated cutscenes (looking like low-budget E-surance commercials), and the campaign has no solid, satisfying ending.

It\'s a shame, because the actual gameplay that this below-average plot surrounds is usually quite good. Each level throws you into various environments throughout the city that Faith needs to traverse with the help of some serious acrobatic skills. As you run, you pick up speed and are able to string moves together. Everything from wallruns to pipeclimbing is used by Faith to zip across levels. All of these moves are quite easy to pull off no matter what control scheme you\'re using, although the mouse and keyboard combo does make it slightly easier to aim Faith in the right direction.

At its peak, Mirror\'s Edge is a pure joy to play. Running, jumping, and sliding over environments without pause is truly exhilarating as DICE has captured the sense of movement quite effectively, with Faith\'s hands swinging appropriately and the camera bobbing as if it was attached to an actual head. To help players, DICE gave Faith "runner vision" (disabled on higher difficulties) which highlights interactive objects with a bright shade of red. While it seems like a feature that hardcore gamers would regard with disdain, it\'s not obnoxious enough to make the game feel like its holding your hand. It\'s only helpful enough to ensure that you won\'t make frequent pauses that break your momentum. Unfortunately, things are bogged down a bit too often by a variety of other factors.

The chief of these is the game\'s liberal use of armed enemies that take potshots at you as you try to navigate the environment. Usually you simply go around them, which further boosts your adrenaline. However, you\'ll often find yourself running into them despite your best efforts. The combat mechanics should be as smooth as the actual movement, but they\'re not. Stopping an enemy involves either pounding him dead with your fists (by which time you\'ll be dead yourself) or disarming them during the split second their gun is highlighted red. While this move leaves the enemy unconscious and you with their gun in your hand, it is often difficult to pull off. While players might be encouraged to empty it into the enemy\'s friends, they\'re going to run into Mirror Edge\'s questionable gunplay. DICE isare one of the masters of multiplayer combat, so why they weren’t able to preserve the solid gunplay from the last few Battlefield games is a mystery. Guns are inaccurate, floaty, and just don\'t feel satisfying to use. You can throw one away, but this ruins the flow of the gameplay.

Mirror\'s Edge is also quite unforgiving when compared to other recent platformers, most notably ones like Prince of Persia. Whereas you pretty much didn\'t have to watch where you were jumping in the Prince’s latest sojourn, be prepared to die and restart sections A LOT in ME. The game awards those who make precise movements but punishes those who are even a degree off from grabbing a ledge. It can become very frustrating for impatient players. If you want to play Mirror\'s Edge, then prepare for cheap deaths and a bruised ego.

Beyond the story mode, there are two other modes to play around with: record-beating races and speed runs. You basically blaze through the level as fast as you can. There are leaderboards for those interested, so the game may or may not be worth the price depending on your interests in such features.

Mirror\'s Edge is a beautiful game to look at. Its world is one of sharp contrasts, containing stunningly clean white environments sporadically highlighted by bright colors. While it may not break any technical ground, the unique design feels great after coming from this generation\'s bevy of dark and dank corridors. It looks great on PS3 and 360, but be sure to play it on a PC if you\'re looking for some serious eye candy. For the PC version, DICE added PhysX support, which helps liven up the environment with new materials like plastics and ripping cloth. It\'s not a huge difference, but when added with higher resolution and Anti Aliasing support, it gives the PC version a real edge.

Sound design is great, with ambient effects like Faith\'s breathing and footsteps further immersing you in her adventures. Voice acting is above the bar most games set, and the soundtrack is hypnotically rhythmic at the right times.
While not for everybody, Mirror\'s Edge is a breathes new life the first person genre. While it’s plot is substandard and it can be unforgiving with its platforming, it is a bold and beautiful game. Mirror’s Edge is novel enough to be considered, especially if you\'re a fan of the whole free-running thing.

Gameplay: 8.0 – Great concept that\'s marred occasionally by irritating enemies and unforgiving level design. Do not play this game for the guns!

Presentation: 8.5 – Spectacularly designed game world and well-captured sense of movement and danger. Unfortunately, the story that ties missions together is, at its best, pathetic.

Graphics: 9.0 – Not a technically stunning masterpiece, but definitely an artistically striking one.

Sound: 9.0 – Possibly the game\'s strongest aspect, everything from ambient sounds to music to voice acting helps heighten the sense of immersion.

Value: 8.0 – Mirror\'s Edge isn\'t going to last for everyone, but some will appreciate beating records in the race and speed run modes.

Final Score: 8.5 – A bold concept that might captivate players looking for something fresh and new.