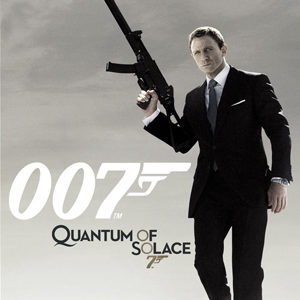 A mind-numbingly average shooter with average graphics and sluggish gameplay that fails to reach Goldeneye excellence...

Lightning doesn\'t strike twice. After playing Treyarch\'s exceptional Call of Duty: World at War, my expectations were raised for their next, and almost simultaneously-released, title: James Bond: Quantum of Solace. This is the first James Bond game to feature Daniel Craig as 007 and the first in a long time to migrate to a new publisher and developer. Many had hoped that this game would rise above its disastrous predecessors to bring 007 back to its glory days. While decently fun, Quantum of Solace is no Goldeneye.

The game\'s plot is one of the first things that will put off a lot of potential players. As an official tie-in to both Casino Royale and Quantum of Solace, one would reasonably expect a solid narrative that has you play out and experience the main plot points. Unfortunately, what we do get is an oddly-placed flashback sequence that attempts to explain events from Casino Royale while in the middle of the plot of Quantum of Solace. It\'s a strange and confusing way to organize the game, and ends up ruining any plot progression. To top that off, plot points are inconsistently omitted, leaving you with no sense of understanding accomplishment when you finish the short 4-5 hour campaign.

Gameplay is mostly conventional, borrowing some mechanics from games like Gears of War, Call of Duty, and Splinter Cell. There is a decent cover system that has you running from wall to wall while gunning down enemies in addition to quick-time events that have you take out an enemy in a quick hand-to-hand exchange. Stealth is another mechanic, though it basically boils down to simply avoiding the field of visionof your enemies. Actual gunplay has been lifted from the COD series, and as such feels pretty solid. There are some interesting set pieces that have you manuvering Bond in different ways, but they never seem to "feel" right. Controls on the PC are somewhat sluggish, and the gunplay on 360/PS3 simply feels less satisfying than those in the Call of Duty games. In the end, Quantum of Solace\'s core gameplay feels like a half-***** 007 mod of Call of Duty 4.

The environments themselves are well-designed and varied, taking you to places ranging from a Miami museum to the rooftops of an Italian city. This sense of variation helps capture some of the feel of the movies. Voice talents from both movies are present, and they further add a sense of authenticity to the game in the MI6 briefings and during actual missions.

Multiplayer is pretty competent, preserving the interesting environments found in the single-player campaign. Most of the modes are standard FPS fare, but a few do stand out. Man with a Golden Gun has players frantically forming loose alliances over individual control of a powerful, golden revolver. Some modes let a specific player play as Bond, with Bond Evasion having MI6 players protecting him from terrorists and Bond Versus pitting him against everybody else. Similarly to the Call of Duty games, credits are awarded for different contributions. The difference here is that you can choose what upgrades you want rather than being forced down a strict unlock path that forces you to wait until you reach a specific level to unlock a specific weapon or ability. This is a nice feature, but it ultimately doesn\'t radically change the playing field.

If you haven\'t guessed by now, Quantum of Solace uses the popular Call of Duty 4 engine that is present in Treyarch\'s other recent release, World at War. The difference here is the implementation. Craig\'s character model is pretty much the only thing that looks "great" while the rest of the game exhibits subpar-to-average graphical presentation: enemies clip through walls, textures are shockingly low-quality, particle effects appear last-gen, etc.  To put it nicely, the game won\'t win any awards for visual presentation.

We guess that we should have predicted that Quantum of Solace wouldn\'t exactly blow us away. With Treyarch working on two simultaneous projects, it is logical for them to have put more of an effort towards their entry in the popular Call of Duty franchise, resulting in less attention and polish for Solace. As a result, Quantum of Solace is a solid but uninspired romp through the last two 007 films. Only real Bond nuts need apply...

Gameplay: 8.0 – The gameplay is mostly solid, but feels a little derivative at times. There\'s a nice mix of modes for multiplayer that change up the FPS status quo... at least for a short time.

Graphics: 7.0 – Disappointing use of the COD4 engine: environments are low-poly, textures are low-quality, animations are quirky, etc...

Sound: 7.0 – At least the sound acting and music are authentic to the movies. Weapon sounds are unfortunately of low quality.

Value: 8.0 – The campaign will last you up to five hours, but the multiplayer offers a few diversions that\'ll keep you entertained in the short run.

Final Score: 7.5 – Bond strikes out again. Only play Quantum if you\'re heavily invested in the 007 franchise and have already tried this year\'s higher-quality releases.