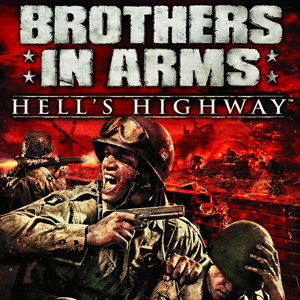 An emotional roller-coaster that respectfully and maturely handles the WWII era while being a solid thinking-man\'s shooter.

The Brothers in Arms series has since distinguished itself from the bulk of WWII based shooters, be they Call of Duty, Medal of Honor, etc. With strong storytelling and cerebral gameplay, even those tired of the genre could find something to like in Gearbox\'s first original IP. Hell\'s Highway is no exception to this rule. While multiplayer is but an after-thought in this highly competitive age of online gaming, the single player offers enough fun, immersion, and emotion to satisfy any shooter fan.

BIA: HH\'s story appropriately involves the failed Operation Market Garden, which Sargeant Baker and his newly-rebuilt squad are thrust into. The narrative doesn\'t so much focus on actual military actions and manuvers as it does on the interactions between the different squadmates, and this is where the game succeeds in engaging the player where many others have failed. The constant turmoil and stress of losing fellow soldiers adds a lot of personality and emotion to the game\'s cinematic cutscenes, and offers an emotional experience not unlike that found in Saving Private Ryan and the Band of Brothers TV series. The only problem is that newcomers with the franchise might be slightly disoriented due to the fact that the game builds on the story of characters like Leggett, who died in the previous game, and this removes a certain element of familiarity that Gearbox wanted to provide.

Hell\'s Highway is definitely a strong game. Throughout the campaign, you take command of varied numbers of airborne squads, each of which has their own purpose. Combat with Germans involves setting up your squads to best supress the enemy, and then flanking to finish them off. Your squadmates are a definite help in these situations, and you\'ll find yourself carefully positioning them to minimize casualties. As a consequence of the game\'s strong narrative, you\'ll feel emotionally motivated to make optimal decisions about combat. Even though "dead" teammates come back at the next checkpoint, it still feels like a personal failure whenever you see one of them go down. Gearbox should be commended for making players actually care about their NPCs.

The game is not entirely focused on squad combat: there are several, short solo sections which demand even more of your sneaking and aiming prowess. These might seem to be strange detours, but they\'re short and intense enough to offer a little more variety to the combat.

In comparison to previous games in the series, Hell\'s Highway really ups the viscerality of the battlefield. If you land a difficult shot or catch a squad of Germans with a grenade, the game will often go into a slo-mo view that depicts the disarmament of your foes. It\'s a little misplaced, but an entertaining function nonetheless.

Brothers in Arms also earns high marks for its production values. From the excellent voice acting to the spectacularly detailed world, Gearbox didn\'t miss a step. Nearby explosions cause ringing in your "ears" as tables and benches splinter realistically. The amount of detail present in the character models is simply stunning for an Unreal Engine 3-licensed game and the environments don\'t disappoint either. The only thing that might bug you is the lack of detail on foliage and trees, but the game looks quite solid.

Brothers in Arms\' weak link is its\' multiplayer mode. Each map supports up to 20 players and has two opposing teams face off in successive capture-the-territory matches. BIA\'s twist on this classic formula is assigning different roles to each team member, giving them slightly different load-outs. The matches can get pretty tense, but there isn\'t that much depth or variety to the mode.

Brothers in Arms: Hell\'s Highway is Gearbox\'s finest independent effort to date. With its spectacular campaign and emotional story, it delivers an intense and rewarding experience that will leave you personally invested in the characters you fight alongside with. We only wish other studios could handle this era with this level of maturity and respect.

Gameplay: 9 – Great tactical action with some surprisingly smart allied AI. The gameplay takes a few twists and turns here and there, but remains consistently satisfying. People interested in the WWII era but tired of the run-and-gun action of Call of Duty and Medal of Honor should check this out.
Presentation: 9 – Spectacular production values with A-list acting and authentic environments and sounds.
Graphics: 9 – Gearbox has done some impressive work with the aging Unreal Engine, and this shows most prominently in the game\'s character models. The rest of the game doesn\'t look too shabby, either.
Sound: 9 – Great voice acting and amazing range of sound effects.
Value: 8 – Sadly, the game doesn\'t offer much beyond its campaign, although multiplayer could be a decent diversion for awhile.

Final Score: 8.8 – An emotional roller-coaster that respectfully and maturely handles the WWII era while being a solid thinking-man\'s shooter.