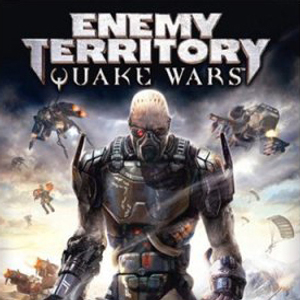 A well-designed successor for fans of Wolfenstein: Enemy Territory...

Splash Damage made quite a splash in the mod world when it released the officially sanctioned Wolfenstein: Enemy Territory. Later packaged with Return to Castle Wolfenstein, Enemy Territory\'s popularity and praise grew like wildfire. With its extremely fast moving gameplay and unique objective-based rounds, Enemy Territory became one of the Big 10 in the PC multiplayer gaming scene. Hired by id Software, Splash Damage set out with the newest id Tech 4 technology to create a next generation follow-up to the freeware legend.

Set in the Quake 2/Quake 4 universe, Enemy Territory Quake Wars is confusingly a prequel to Quake 2\'s storyline. Where Quake 2 and Quake 4 detail the humans\' counter-attacks on the Strogg homeworld, ET:QW details the initial Stroggos invasion of Earth. Since Enemy Territory is a primarily multiplayer-focused series, the game doesn\'t really try to flesh out or connect the story beyond a series of missions which detail key conflicts and objectives in the struggle.

Initially, like in the last game, you choose one of five classes before each match. The GDF classes are similar to Wolfenstein classes; the Strogg classes have different names than the human ones, but they are basically the same roles. GDF soldiers and Strogg aggressors are your typical frontline troops; medics and technicians heal in the field; and so on. There are slight differences between the two races. GDF field ops can drop ammo packs, for example. The similar Strogg oppressor doesn\'t need to drop ammo, since the alien weaponry doesn\'t require any. Instead, oppressors set up a tactical shield to protect infantry or vehicles. Some other differences include the amount of time it takes each side\'s medics to heal, the different abilities of each sides covert ops, and the ability for Strogg technicians to convert enemy corpses into temporary spawn points.

When you get down to the battlefield (either by parachute or teleport, depending on the race), each individual is swiftly presented with a set of clearly-explained objectives. Some of these are shared for the entire team, while others are created on the fly and are specific for your class and position on the map. It adds a sense of contribution, and should make players feel as if they\'re really doing something for the benefit of the entire team. Adding to this team is a variety of medals and XP additions that allow players to translate their achievements into actual in-game bragging points. The gameplay mostly focuses on a specific area containing 3 or 4 different objectives, meaning that there\'s an area of constant action. This might put off Battlefield fans who prefer wide-open battlefields and a large degree of choice.

The actual gunplay is pretty satisfying, no matter what gun you are using. The aiming is precise, just as in the previous game, and all the little quirks, like reload time and weapon cooldown, have been balanced down to an art. Vehicles are decent, and do provide some extra tension to the game.

Built off of a Megatexture-enhanced Tech 4 engine, Enemy Territory: Quake Wars is a departure from previous games using the engine with its large, outdoor-focused environments. However, it definitely doesn\'t impress as much as Doom 3 or Quake 4 did. Compared to other games, the details and textures are only decent, and the lighting and shadowing definitely feel downgraded compared to the other Tech 3 games. Sound effects are pure Quake, down to the Hyperblaster weapon sounds.

Enemy Territory Quake Wars is par of course for most games released in recent years. It builds slightly on the gameplay of its successors with a brand new engine. However, it doesn\'t offer much in terms of innovation and simply appeals to the original ET crowd. This doesn\'t make it a bad game, its just one that will have trouble standing out in the genre.

Gameplay: 9 - A nearly complete conversion of the Quake universe into the ET gameplay model, Splash Damage succeeds in balancing out two slightly asymmetric teams
Presentation: 8.5 - Quake on Earth, what more is there to say? Excellently-designed GUI and clearly-defined objectives make playing a match an exercise in much looked-for precision.
Graphics: 8 - Attempts to use Tech 4 for outdoor environments, but doesn\'t look to great while doing it. Textures and lighting take the most obvious hits. On the plus side, maps are quite large and competently detailed with wildlife and constructions. Strogg artstyle preserved
Sound: 8.5 - All the original Quake weapons and Strogg sounds are here, along with some satisfying modeled human weapons.
Value: 8 - Fans of ET will probably enjoy playing this for the next several years, until whenever the new one comes out.

Final Score: 8.4 - A satisfying mix of team combat and objective-based gameplay should appeal to fans of the original ET.