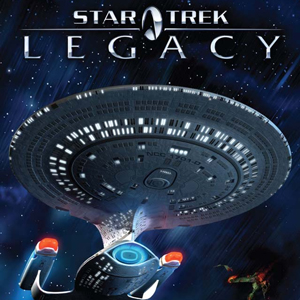 An arcadish disservice to the Star Trek name...

The Star Trek gaming franchise has had its own set of ups and downs throughout the years. We\'ve gotten everything from quality games like the Elite Force shooters and Bridge Commander simulators, down to disasters like Starfleet Command and Encounters. Sadly, the trend in recent years has been towards more mediocre titles. Even though RPG powerhouse Bethesda has taken over the rights to the Star Trek series of games, Legacy is much less than what it could have been....

Calling itself a Space-Combat Simulator, Legacy naturally puts you in control of a single starship from the Star Trek universe, similarly to games like Bridge Commander. The game\'s single player involves you taking the command of various ships in different eras as they explore and battle their way through a plot which details the rise of a "new" enemy (yes, its the Borg... again). The cutscenes in between missions and objectives are pretty well done and reminded me of the TV shows in terms of their authenticity. All of the original actors of the captains of the famous ships were also able to contribute their voices, a first for the series. However, some of the acting comes off as bored and/or monotonous.

Once you get down to the gameplay itself, you start encountering some of Legacy\'s glaring problems. The largest challenge is the controls, which are plainly badly thought-out. It\'s hard to figure out how to maneuver and to track and designate the target you need to fire upon. There\'s something off-putting about the response time of the ships, as it often takes 2 or 3 seconds for your ship to start turning from the moment you press the button. Compared to Bridge Commander, ship movement here is much less precise and satisfying.

Instead of one ship, you are given command a small, four-member fleet. Giving commands to your fleet is a nightmare, and you\'ll often have trouble figuring out what each of your ships is doing a at a specific times. In instances where I could, I simply told the entire fleet to target one ship at a time, in order not to deal with the micro-managing.

There are some skirmish and mutliplayer maps, but I\'ve been unable to find, join, or create any matches on either the PC or 360 version.

Disappointingly, the game\'s graphics don\'t look nearly next-gen. The ship models are good, but they\'re almost on the same level as those found in Bridge Commander, which is several years old. There\'s some weird graphical glitches such as Borg cube spawning multiple models of itself in order to "explode" really take away from the immersion in the game.

The ship, weapons, and other sound effects are all lifted directly from the Star Trek series, so there\'s really nothing to complain about.

Sadly, the Star Trek gaming scene is nothing compared to what it once was. Legacy is a testament to that and Bethesda should stick with what they do best: The Elder Scrolls.

Gameplay: 6 - Terrible camera and controls. Targeting and combat have been overly simplified. Multiplayer dead on arrival
Presentation: 7 - Decent ship models, and authentic use of voice acting and sound effects
Graphics: 6 - Lacks the next-gen feel, terrible particle effects and glitches
Sound: 8 - Authentic captain actors and sound effects are the best part of this package.
Value: 6 - Done with the single player? Try the limited skirmish or broken multiplayer!