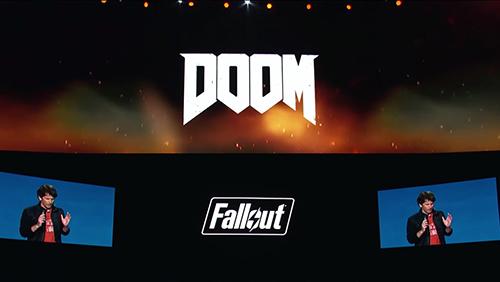 The concept of a publisher “winning” E3 is something that I have disagreed with. It’s not as if, through the magic of a 90 minute press conference, a company can catapult itself so far ahead of the others through the battle for public attention that all competitors might as well go home. If I had to apply the concept of “winning” to these presentations, it would be in a more modest vein. Quite simply, if a publisher accomplishes what it set out to do and either a) resets expectations after a difficult time or b) proves to its fans and intended audiences that its taking things up to the next level, said company would have “won.”

Bethesda kicked things off with their first ever E3 Showcase. It was a humble show that belied their inexperience, with half of their giant screen flickering on and off at random intervals throughout the show. Fortunately, nearly everything else was pure class.

The first game/project that you showcase is an extremely important decision. You want to start off on a positive note, but it is imperative to be wary of losing the audience’s attention as things drag on. The conference was well balanced, with DOOM and Fallout 4 anchoring the start and end of the show. DOOM is a special gem both in my heart and those of an older generation. It is the archetypical “first” game, the genesis of many gamers’ love affair with the industry and an example of an industry getting to grips with what makes its medium so special. Perhaps that’s why it was the perfect first reveal for Bethesda’s first ever E3 show.

DOOM has always been a pure concept: shoot things until they explode and dodge so that you don’t die. The worry has been, with the way that shooters have evolved over recent years, that id would go down either the cinematic, but drab, space marine route, or try their hand at some open world shenanigans. Thankfully, none of that happened.

DOOM is simply titled DOOM because that is what it is. The game that we loved to play, brought up to our generation’s graphical and auditory standards. And boy, is it gorgeous. id Tech 6 was specifically built for the project and lends a buttery smooth frame rate combined with a visual fidelity that I wouldn’t have anticipated just a decade ago. All of the old favorites return, and the game looks to be a complete package that will thrill both veterans and newcomers alike when it launches during Spring 2016.

Fallout 4 Blows Us Away

Having played The Witcher 3: Wild Hunt, it was difficult to anticipate another monstrously ambitious take on open world RPGs coming anytime soon. Well, Fallout 4 quickly put any doubts to rest. The structure of this presentation was very well paced, not just simply rolling 15 minutes of straight gameplay. Instead, Todd Howard narrated several “chapters” of the game’s structure and explained several of the unique factors that look to make Fallout 4 something special.

You can now play as a female. Dialogue is voiced. The Creation Engine has been updated for newer hardware with advanced lighting and other visual effects. You constantly have a canine companion that you can interact with more realistically. There’s hundreds of combinations of parts that you can use to customize your weapons. Parts can be scavenged from everyday objects, like lamps, which gives a new value to what we used to think of as junk. You can fully customize your armor. You can rebuild settlements. You can build contraptions, Minecraft style. You can defend these settlements from raider attacks. These settlements become populated over time. You can lead caravans between your settlements. You can command and ride a VTOL across southern Massachusetts. You can use jetpacks. You can aim down the sights during first person combat.

And there’s so much more.

All of this, combined with a surprising release date, means that Fallout 4 had 1 of the best and most confident first look presentations of any game that we have seen at any E3.

As gamers, we sometimes feel that we’re being talked down to, that corporations are trying to wring out as much profit as possible while giving us less and less game. Helped by the fact that it is privately owned, Bethesda doesn’t have to worry about simultaneously placating shareholders, annual returns, and its customers.

DOOM has been under development for many years, being rebooted because it wasn’t quite right. This level of investment and dedication paid off, especially for the Snapmap feature which could introduce a culture of modding to a wider community. Snapmap allows the editing of maps AND gameplay logic across single player, multiplayer, and cooperative modes across all three platforms. While an expected PC feature, console audiences will be delighted with the level of granularity that Snapmap brings to the table.

Dishonored 2, while obviously not ready, got the fans excited.

The Elder Scrolls: Legends is a risky proposition for Bethesda. While The Elder Scrolls brand is huge, they know that any card game is going to be competing with the mindshare of Blizzard’s ever-expanding juggernaut, Hearthstone. Is there enough room for two such projects? We’ll learn soon.

Finally, Fallout 4’s release date was the cherry on top of an excellent video game sundae (or Sunday). November 10, 2015. I struggle to think of the last time that a large AAA game was announced with just over 5 months to go until its launch date. Look for this to be setting a new standard for shorter and more intense marketing cycles, avoiding the constant disappointment of delays and controversy of graphical downgrades.

There you have it. That’s why Bethesda won E3. However, don’t fret if none of these games are quite up your alley. Microsoft, EA, Ubisoft, Sony, Nintendo, Square Enix, and the PC Gaming Show all have a shot at captivating their audiences and “winning”. We look forward to following along with you as the action unfolds!