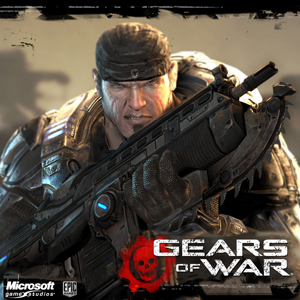 Gears of War. A video game name that has become nearly as popular as that of the Halo series. But, is the popularity justified, or is Gears yet another Cog in the overrated Microsoft Game studios arsenal?

From the moment you fire up the game, its hard not to be stunned by the exquisite presentation and graphical prowess of Epic\'s now-one-year-old Unreal Engine 3. The tone is dark, with your buddy breaking you out of jail to help fight in a war where every single man is needed.

As you go through the first and second levels and on, you get acquainted to Gears of War\'s unique gameplay mechanics: a third-person shooter with an innovative cover system which discourages run and gun and encourages stop and pop gameplay. It is a nice change of pace from the usual shooter mechanic, and ends up being one of Gears\' few worthwhile graces.

Your enemies are the Locust, a race of rabid beings who live underground and were woken up to unleash hell upon humanity. The Locust themselves look intriguing, with scaly skin and sharp teeth which are made even more frightening by UE 3. There\'s a huge variety of enemies, from standard soldiers, to grenade-launcher carrying Boomers, all the way to an enormous Brumak exclusive to the PC version of the game.

Even though the enemies look nice and are quite varied, requiring different strategies to kill them, they do inherit some clunky AI techniques. As Gears is a stop and pop shooter, the Locusts run towards cover and occasionally pop their heads out to shoot at you. From time to time, they flit in between cover and either charge or retreat at random intervals. The AI is not that good, with them not exhibiting any realistic squad or group tactics to take out the player\'s squad, such as enemies in the F.E.A.R. series or in the soon-to-be-released Crysis. If you\'re close to one, they\'ll mindlessly try to club you to death, no matter how many other COG soldiers are shooting at them. They are extremely tough, and the game only seems occasionally to reward well-placed headshots with the sniper rifle with a visceral head explosion animation.

The campaign itself is subpar for the next-generation when you don\'t consider the graphics and sound. After the opening cutscene, you don\'t get much explanation about your squad are doing besides with a few random radio transmissions which state such incoherent explanations as "finding the resonator" or "detonating the lightmass bomb." The game\'s characters are boring and have cardboard personalities, constantly yelling curses and trying too hard to be testosterone filled badasses. Level design is also mostly linear, with you constantly advancing down either a street or hallway, taking down enemies and throwing grenades into emergence holes, a cheap method of providing you with more enemies to kill and something else to do instead of shooting.

And that\'s all there is to Gears, shooting. Rarely will you get a chance to figure out a puzzle to advance, once or twice there is something such as getting across a dark city while strategically using light sources to avoid dangerous nocturnal flying bugs. On top of that, the added Windows chapters do little to change up the game, offering even more hallways and streets to shoot down. They end with a Brumak boss battle which is little more than a 3D version of the arcade game Metal Slug\'s bosses. But, all in all, the campaign\'s flaws don\'t prevent it from being a unique experience

As soon as you finish the game\'s campaign, you\'ll find out that there\'s a multiplayer part of Gears. A quick warning to fans of Epic\'s AAA shooter series, Unreal Tournament: this is anything but that. The multiplayer uses the same third person mechanics and system as the campaign does, making it very unique in terms of gameplay and style. It is a fun diversion, but after a while, you\'ll go back to playing real multiplayer shooters like Battlefield or Counterstrike. Unusual for Epic, the game features only a few multiplayer gametypes with few to none customization options besides which weapons are placed at predetermined spawn points. It gets old quick. Co-op is another fun diversion, allowing you to simultaneously marvel at the graphics and flank enemies with a friend.

The game is nice-looking, and there aren\'t many games on the market which compete with it. However, it is quickly starting to fall behind, especially as developers build and improve upon the excellent Unreal Engine 3 to pump out games like Bioshock and Epic\'s own Unreal Tournament III.

On the Xbox 360, this game was among the best for a while, but that\'s because it had nothing much else to compete against and reviewers were blindsided by the short-lived graphical leap over the last generation. On the PC, Gears shows its true colors, especially if you\'ve played any of a dozen other quality shooters with much more personality and variety than in Gears.
If Gears has one selling trait, it\'s that it offers some unique takes on the shooter genre and manages to be better than most other games. It is fun, if not too long and missing some glaring shooter conventions.