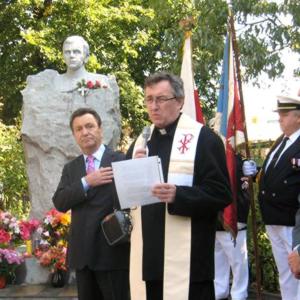 Brooklyn, NY… Rev. Marek Sobczak (center) expresses a prayer of thanksgiving for the Catholic Church’s beatification last June of Poland’s SOLIDARITY priest, Father Jerzy Popieluszko. A statue to his memory is seen in the background.

Participating in the commemorative ceremony conducted at Greenpoint’s McCarren Park are Michael Pajak, president of the New York Chapter of the John Paul II Foundation (left) and Frank Milewski, president of the Downstate N.Y. Division
of the Polish American Congress.  The Sea League of America, Liga Morska, provided the honor guard (in rear).

Father Popieluszko was bestowed the Church’s title,  Blessed, as a result of his gangland murder by Communist authorities on October 19, 1984.  The Communists ordered his execution for his inspiration of the people of Poland to maintain their courage and hope in face of relentless Marxist violence and terror in Poland’s fight for its freedom and independence.

It is widely acknowledged that Poland’s 1989 victory attaining this goal and the subsequent collapse of the Communist system should be significantly attributed to the influence of this fearless priest and the moral encouragement of Pope John Paul II.

With a commemorative mass scheduled after conclusion of the outdoor observance, the participants marched through the streets of this well-known Polish community to St. Stanislaus Kostka Church where Rev. Sobczak is pastor.  As they did when they still lived in Poland, many in the throng marched to the church singing traditional Polish religious hymns.

Bishop Wojciech Polak from Poland’s Gniezno Diocese was guest celebrant at the St. Stanislaus memorial mass.  Later in the day, he traveled to St. Pancras Church in Glendale where he presided over the annual Polish Heritage mass sponsored by the Polish Apostolate of the Diocese of Brooklyn.