What the sun seen 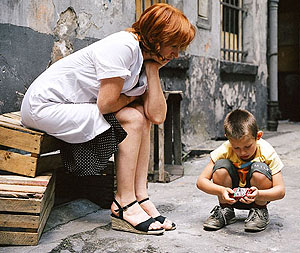 What the sun seen (Co słonko widziało) in New Directors / New Films with director Michal Rosa present for Q&A Presented by the Film Society of Lincoln Center and the Department of Film, Museum of Modern Art

What The Sun Has Seen, directed by Michal Rosa, which won top honors at Poland’s national film festival in Gdynia in 2006, has been
selected for the 36th annual New Directors / New Films series, the prestigious international showcase of emerging directors.

This quietly powerful film captures the texture of life in much of Poland today as ordinary people struggle to realize their modest dreams in an urban environment marked by the messy overlap of a collapsed centralized economy and a still largely unregulated capitalism. Rosa, who found the inspiration for his script in a mix of newspaper articles, police reports, and direct observation, imagines the separate lives of three diverse individuals as they try to raise desperately needed cash in their pursuit of dignity and hope. They eventually intersect in this Polish miniature that has been compared in structure and spirit to Robert Altman’s Short Cuts or Paul Anderson’s Magnolia. Michal Rosa’s complex vision of morality contrasts painfully with the innocence of the title… [as] the interwoven storylines seem headed toward an apocalyptic finale. −
T. Sobolewski, Gazeta Wyborcza