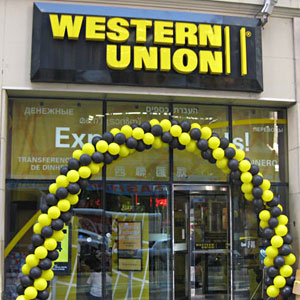 Showcases the Diversity of Employees and Consumers as it Hosts Annual Customer Appreciation Day
NEW YORK, N.Y. (Sept. 05, 2008) – It was all about consumers at 1440 Broadway in New York today, as Western Union hosted its annual customer appreciation day.  The Western Union flagship store in Times Square was buzzing as it celebrated with consumers and employees representing nearly every continent of the world.  An annual tradition, the day is specifically set to say thank you to the hundreds of thousands of consumers that walk through the Western Union doors each year.

The Western Union Times Square store originally opened for business in 1934 and is the only company-owned location out of the more than 45,000 Agent locations that are spread across the U. S.  As the company’s flagship location, it offers the full spectrum of Western Union products along with services for travelers and products unique to New York – including money transfer, bill payment and prepaid offerings, currency exchange services and New York Transit MetroCards.

"Customer Appreciation Day is a way to let consumers know how much we value them," said Guy DiMaggio, regional vice president for the Western Union Northeast region. "It is also about recognizing every day hero’s who work hard to support families around the world. This celebration let’s us recognize them,” Added DiMaggio.

Western Union in Times Square is at 1440 Broadway, between 40th and 41st Streets. The store is open for business 24 hours a day, seven days a week. For more information call 212-354-9777 or send an email to 1440broadway@WesternUnion.com.

About Western Union
The Western Union Company (NYSE: WU) is a leader in global money transfer services. Together with its affiliates, Orlandi Valuta and Vigo, Western Union provides consumers with fast, reliable and convenient ways to send and receive money around the world, as well as send payments and purchase money orders. It operates through a network of more than 355,000 Agent locations in over 200 countries and territories. Famous for its pioneering telegraph services, the original Western Union dates back to 1851. For more information, visit www.WesternUnion.com