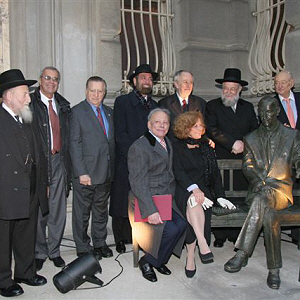 On Sunday, November 11, 2007 a monument honoring Jan Karski (1914-2000), Polish World War II resistance fighter and scholar, was unveiled outside the Polish Consulate in Manhattan. In 1942 and 1943 Karski reported to the Polish government in exile and the Western Allies on the situation in Poland, especially the destruction of the Warsaw Ghetto and the German extermination camps.

* * *After the war he taught for 40 years at Georgetown University in Washington, D.C. Among the honorary quests at the ceremony were: Ewa Junczyk-Ziomecka, representative of Polish President, Undersecretary of State of Poland, Rabbi Meir Lau the Chief Rabbi of Tel Aviv and former Chief Rabbi of Israel, Maciej Kozlowski, Poland’s former ambassador to Israel, currently director of Poland’s foreign affairs ministry, and Ed Koch, former New York Mayor. All of them pointed Karski as “A Righteous Among the Nations”. Host of the ceremony, Krzysztof Kasprzyk, the Consul General of the Republic of Poland described Karski as an “iconic man” and a “true hero of the 20th century”. Kasprzyk also read a letter from the former president Bill Clinton, who was a student of Karski’s. During ceremony performed famous Cantor, Joseph Malovany.

The monument is created by a well-known Krakow artist Karol Badyna and features a statue of Jan Karski sitting erect on a bench with his legs crossed and a cane in his hand. A chess board, a game he enjoyed playing, is nearby. The monument is situated in front of Polish Consulate at East 37th Street and Madison Ave.