Prague - One of the Most Beautiful Cities in the World 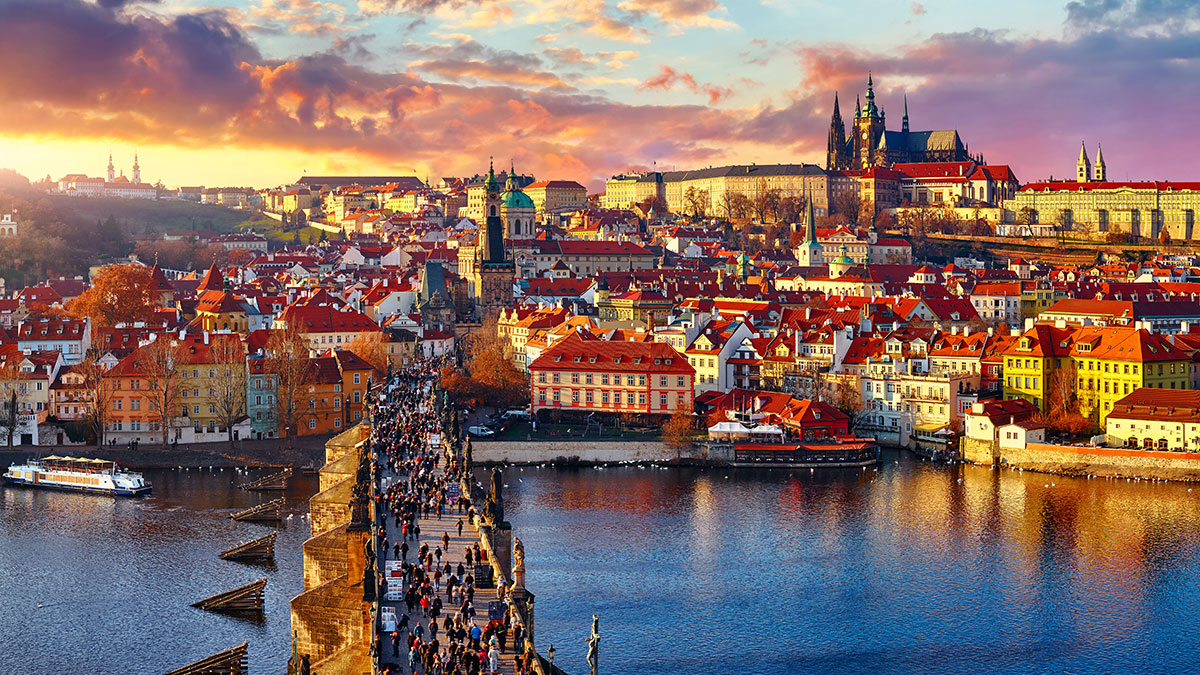 The capital of the Czech Republic shines with a fresh yet ancient warmth. Unique buildings from every era of architectural history, idyllic coffee houses, traditional bars in the narrow lanes, and other attractive characteristics of an earlier age attract millions of visitors every year.

Once a small place at a point where the Vltava river could be forded, where the salt and amber trade routes later converged, the little market grew into a hub of the European goods trade and became capital of the Holy Roman Empire under Charles IV in the 14th century. The citizens could afford to commission leading architects and artists.

This is how Prague became one of the most beautiful cities in the world, with its Baroque-style buildings, churches and its castle, which towers over the city. The city has been celebrated by great musicians, painters and writers. In 1784, what had been five independent districts merged into a unique complex of buildings from all periods and styles. In 1992, UNESCO recognized the historic center of the city as a World Cultural Heritage Site.

Those in the know say that Prague is at its loveliest in the early morning, when its whole expanse stretches out peacefully before your eyes: one of the most beautiful marketplaces in Europe, the picturesque Old Town Ring with the Town Hall complex, the Teyn Church, its merchant and aristocratic houses. From ten o'clock onwards, tourists gather every hour, on the hour, in front of the Town Hall in the Old Town, waiting for the Apostle Carillon of the legendary Astronomical Clock. It is much more than a mere clock; it also shows summer time and the position of the signs of the zodiac and it is a memento mori, a true masterpiece which was completed at the end of the 15th century.

Today, it seems natural for Czech reformer Jan Hus to have pride of place in the center of the square. However, the Hapsburgs did not allow the monument to be erected until 1915, 500 years after his martyr's death.

Since it was begun in the 9th century, the Castle (Hradcany) has been the heart of Prague, the center of its spiritual and secular life and the official residence of its rulers, now that of the President of the Czech Republic.

The palace and religious buildings are grouped on a magnificent site. The approach to the Castle offers an incomparable view of Prague. The Gothic Cathedral of St. Vitus is at the center of the site. The Cathedral combines elements of the Renaissance and Baroque styles, as it took almost six centuries to build, with work finally being completed in 1929. Today, St. George's Monastery, which was consecrated in 973 and reconstructed in 1976, is part of the National Gallery. Although the claim that alchemists once attempted to increase the wealth of Rudolf II here is a myth, the especially picturesque Golden Lane has a magical attraction for tourists. In fact, Franz Kafka did actually live here.

Only six synagogues, the Jewish Town Hall in the renaissance style and the old Jewish cemetery still remain of the 'Schtetl' or Jewish ghetto. Over 12,000 gravestones are crowded closely together, with the bodies buried one on top of the other, as this was the final resting place for all Jews in Prague until 1787. The most famous of these belongs to Rabbi Löw, the legendary creator of the golem. The Jews were not released from their isolation in the ghetto until 1849, on the command of Emperor Franz Joseph I, who granted them civil rights and permission to settle in other districts as well.

The oldest religious building is the early Gothic “Old New Synagogue", built in 1270-1290 and a place where the faithful still gather today. Today, the Pinkas Synagogue is a memorial to the Jewish victims of National Socialism. The names of 77,297 victims from Bohemia and Moravia are listed on its walls.

Until 1836, the second-oldest stone bridge in Europe constituted the only route across the River Vltava and, as such, was of great strategic importance. It also played a key part in the life of the town as a market, a court and the scene of the coronation procession.

Completed in the early 15th century after a period of construction lasting more than 100 years, its 16 arches supported on piles span the river, a distance of more than 1,700 feet. The bridge has an impressive width of 33 feet, enough to accommodate four coaches. In 1683, the citizens of Prague began to decorate the bridge railings with bronze statues and groups of figures of saints. St. John of Nepomuk, which was cast by Matthias Rauchmüller in Nuremberg in 1683, is both the oldest and the most popular figure, because the saint was thrown to his death from this bridge by Wenceslas IV in 1393. The Old Town Bridge Tower, with its sculptures, is an outstanding work of architecture.

The Malá strana ring, which is linked to the Old Town by the Charles Bridge, has been the center of the Malá strana since the city was founded back in 1257. The north and east sides of the square are lined with magnificent aristocratic houses that, together with the Church of St. Nicholas, divide the open area into two parts. With its magnificent 246-foot cupola, the church was built by the famous Baroque architect Dietzenhofer, between 1703-1711 and 1737-1752.

Despite their classical façades, Gothic merchant houses have been preserved only on the south side of the Ring. Some of the cellar vaults are now home to cozy little bars.

Its distinctive tower is what makes the New Town Hall (now a cultural center) so unmistakable - it is the famous face of Charles Square, the largest open space in Prague, at almost 20 acres. The original building, erected after 1348, already had two wings housing the offices and the prison. It was extended to a four-winged complex with an arched courtyard in the early 15th century, and the tower followed 40 years later. The building took on its current form in 1559, when it was remodeled during the Renaissance.

In 1419, the place went down in history as a result of Prague's first defenestration, when supporters of the reformer Jan Hus, who had been publicly burned four years previously, threw the town councillors out of the windows, starting the Hussite Wars.

The view of the Old Town of Prague is dominated by what was once the main church of the Hussites, with its two 262-foot towers. It was built on Roman and early Gothic foundations in several construction phases between 1339 and 1511.

The splendid portal on the north side, with the relief scenes of Christ's suffering in the tympanum, is believed to originate from the stonemason's lodge of Peter Parler. Following a fire in 1679, the vault of the main nave had to be replaced in the early Baroque style. A large part of the interior decoration is also Baroque, while the chancel is still Gothic. The right nave shelters a Madonna created in about 1400. The marble plate behind a Gothic chancel conceals the grave of Danish astronomer Tycho Brahe, who researched the basis of the calculations for the paths of the planets in around 1600 with Johannes Kepler.

The 2,460-foot long and 197-foot wide area laid in 1348 under Charles IV was once a horse market. It was only in 1848 that the market was named after St. Wenceslas, whose equestrian monument stands at the upper end of the square, in front of the Neo-Renaissance palace of the National Museum, with its treasure trove of historic paintings. Surrounded by 19th- and 20th-century buildings, including hotels such as the famous "Evropa", shops and cinemas, Wenceslas Square has been a boulevard long favored by those out for a stroll. Its lower end forms the "Golden Crossroads" with Prague's two main shopping streets, Národní trida and Na prikope.

Wenceslas Square has been at the center of good and bad times: in 1918, the citizens of Prague celebrated the birth of an independent Czechoslovakia here; 50 years later there were demonstrations against the invading Warsaw Pact forces. This is commemorated by a memorial to the victims of Communist rule.