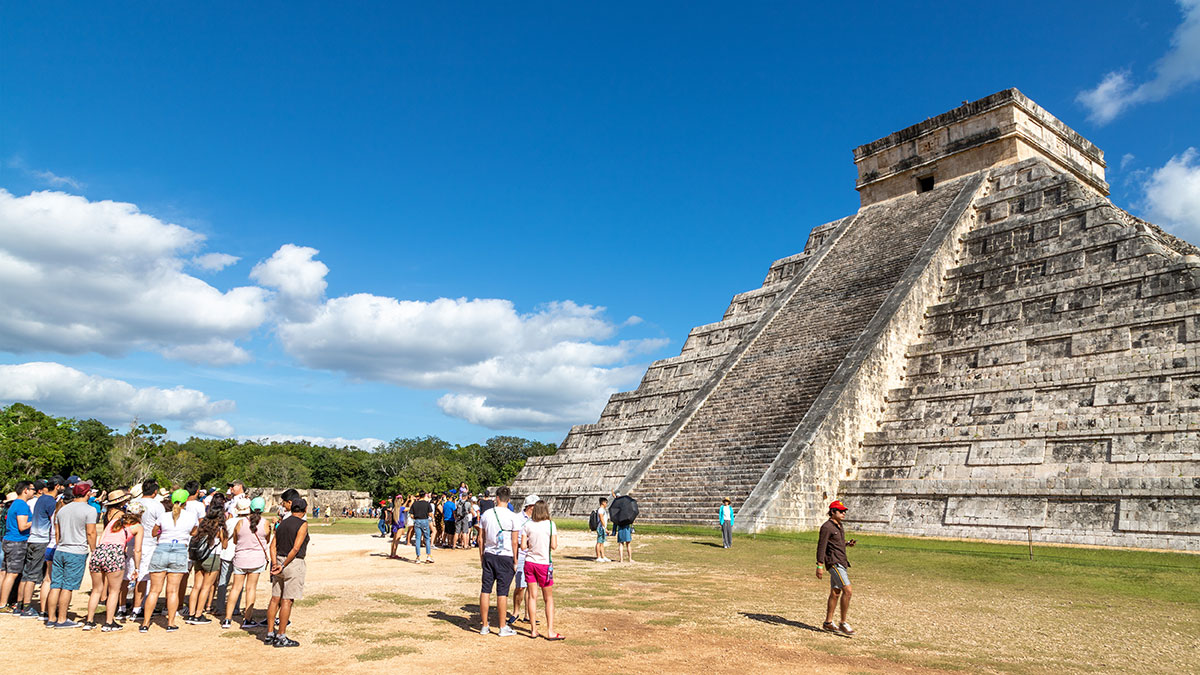 Chichen Itza, Mexico. Tourists visit the famous Kukulcan pyramid at Chichen Itza in the Yucatan Peninsula of Mexico. A UNESCO World Heritage Site, it is also one of the New Seven Wonders of the World. Foto: Ronniechua

The center and pivotal point of the region is Cancún, a nearly endless mile of hotels that has as much to do with Mexico as Las Vegas has to do with the Nevada desert. However, what's offered here in the way of a hotel landscape and experimental gastronomy is sometimes so eccentric that it makes up for it. People looking for a holiday with beach, sun and action will be at home here.

All-inclusive American-style holidays are not only a feature in Cancún, but can be found all over the entire region. Stylish and familiar resorts are located along the entire length of the Caribbean coast, most directly on the beach next to the turquoise blue sea. Accommodation in all price ranges is offered in the touristy areas along the coast: in the lively but simple Playa del Carmen, on the diver’s island of Cozumel as well as in peaceful Tulum.

The Caribbean coast has not unjustifiably been named by the tourists as the Mayan Riviera since this is where the numerous remains of Mayan culture can be found - the people who put their stamp on the region before the arrival of the Spanish conquerors. The most famous site directly on the coast is Tulum. Inland, you'll discover the world-renowned sites at Chichén Itzá and Uxmal, as well as numerous other archaeological areas.

Over 60,000 people live on Mexico’s largest inhabited island; thousands of tourists seeking relaxation go there every year. They are all concentrated on the west coast in and around San Miguel, the only town on the island. Here there are shops, a promenade along the coast and a pedestrian zone as well as restaurants with seafood and Yucatecan specialities – not forgetting the fine sandy beach which also features flat escarpments. Overall, the scene is quieter than on the mainland of the Yucatan peninsula, which is not surprising seeing as people in Cozumel spend a great deal of time underwater.

Primarily off the southwest coast, there are extensive diving areas which boast a crystal-glass view of up to 250 feet. The best-known is the Panancar Reef, with its tall coral pillars and tunnels. Experienced divers can set sail to the vertical Santa Rosa Wall, for example. Even snorklers can discover some of the rich underwater fauna, and those not wishing to get wet can book a trip in a glass-bottomed boat. The archaeological sites of San Gervasio and El Catedral bear witness to Cozumel’s interesting history. 30 Mayan sites are thought to have existed on the island between 300 and 1650 A.D.

With its chessboard-type street system, the capital city of the State of Yucatan is unmistakably of Spanish origin. Francisco Montejo himself, as founder of the city, built the Casa de Montejo on the sweeping Plaza Mayor (Zócalo) in 1549. The family coat of arms of the Montejos is still displayed on the splendid façade of the prestigious former family home. Other stylish buildings with arcades such as the Palacio Municipal and the massive Cathedral of San Ildefonso (built 1561-1598) characterize the marketplace of Mérida.

People meet at Zócalo in the evenings for a stroll and then flock to the surrounding bars and restaurants. Authentic everyday life in the lovely city of more than 1 million inhabitants can be experienced at the giant Mercado Municipal, where you will find everything Mexicans need for sale in the market halls and the nearby streets. A trip to Paseo de Montejo, where the rich owners of sisal plantations had prestigious villas built around 1900, is also not to be missed.

The youngest of the Mayan archaeological sites (12th -16th centuries) lies spectacularly on the upper bank overlooking the turquoise Caribbean Sea. Pictured on travel brochures a thousand times, this delightful place is widely known, and even those wishing only to swim should not miss out on a day trip to Tulum.

The most dominant building is the temple-like structure of El Castillo, situated directly on the sea, with its snake pillars and easily recognizable eagle frescos. Remarkably often you can see – in addition to less-than-shy and well-fed iguanas – Tulum's characteristic figure of the “descending god” or "god of the bees", resembling a diver. Examples of the figure can be found at the Casa del Halach Uinic (House of the Great Lord) and in the Templo de los Frescos (Temple of Frescoes). Those with a swimsuit can take themselves off to the sandy beach and view the Tulum site from the same angle as the Spanish first saw it - from the lovely warm water.

Experience Mayan culture and Yucatan’s nature for yourself – this is the motto of this large amusement park between Playa del Carmen and Tulum. One day is not enough to see everything and to discover that there is something here for visitors of all ages. However, everyone wants to experience the main attraction - the underground river: in the reconstructed system of caves and canals of the clearest water, called “cenote” by the natives, you can snorkel over 550 yards and explore the underwater world.

Another popular activity, despite being expensive, is swimming with dolphins, which is supposedly in line with animal protection requirements. You can also marvel at the huge range of flora and fauna in the Mariposario (the butterfly pavilion), on the Isla de Flamencos, in the coral reef aquarium and on the jungle path. Another highlight is the village of Maya, in which actors reinact scenes from daily village life in the past.

There is actually only one reason to go to Palenque, but a trip to the lowland of Chiapas in the lush green jungle more than justifies it: Las Ruinas de Palenque. This former Mayan town covers 6 square miles, but only a fraction of the area has been excavated to date. The town was populated from 100 B.C. and was in full bloom around 600 - 800 A.D. In the Pyramid of Inscriptions (Templo de las Inscripciones), the tallest building on the site, you can see the burial chambers of Pakal, the ruler and builder of Palenque. At the center of the main group of ruins there is a palace - El Palacio. The building comprises a labyrinth-type complex of corridors, yards and chambers. The tower was probably used as a lookout post or as an observatory.

Behind this fascinating main group, there are other clusters of ruins on the edge of the rainforest to be discovered – Palenque’s location makes it a truly mystical place. An enchanting footpath leads from the site to the museum. Although this is housed in a modern building, the history of the Mayan town is extremely well documented.

The rain god Chac is said to have ruled over this town. You will come face to face with him at every corner, particularly with his nose, which symbolizes the flow of water – a rare element in this area and which was therefore given even greater significance. Uxmal lies in the middle of the Puuc region in gently rolling hills, one of the most impressive examples of Puuc architecture, characterized by all sorts of ornaments, figures and reliefs.

The Pirámide del Adivino (Pyramid of the Soothsayer), which is formed of no less than five temples built one over the top of another, is both unusual and fascinating. Next to it is the breathtaking Quadrangle of the Nuns which encloses a ceremonial square. Nowhere else in Uxmal will you find more beautiful decoration: birds, huts and the unavoidable Chac masks as well as an exquisite roof featuring two serpents entwined. Through a small ball game area you will reach the most important building in Uxmal, the Palacio del Gobernador, with its impressive outside staircase.

Chichén Itzá remains full of secrets to the present day – both for archaeologists and for visitors. This may be because two different cultural eras appear to have taken place at the old Mayan site: the distinctive Puuc style of the southern group of buildings and the influence of Toltecan architecture on the northern buildings which emerged some hundred years later.

It is difficult not to be impressed by the magical aura emitted by the site. It is best to get your bearings at the entrance where a real-life model of the layout of the ruins can be found. With a mixture of awe and amazement you will be opposite the Castillo (also known as the Pyramid of Kukulcán), dedicated to the feathered serpent. The wide ball game area and the Temple of the Warriors with the statue of the Chaac Mool god are also very impressive. If you continue past Caracol, which may have been used as an observatory in the past, you will reach the Chichén Vieja where excavations are still being carried out. And every discovery attracts a new mystery..

Cancún, the former fishing village on the Yucatan peninsula, can be described as an artificial paradise interspersed with natural beauty. Fantastic beaches, a dreamy blue and green sea, unique diving areas – is it any wonder that the tourism industry has pulled out all the stops?

Strictly speaking, it is the Isla Cancún, the island linked to the mainland by two bridges, that has attracted visitors for years. Since the most luxurious hotels have reserved the most beautiful beaches here, you won't notice many tourists in the old center on the mainland. Like nearly everywhere in Mexico, the Mayans have left their mark on Cancún Island. A visit to El Rey at the south end of the island bears eloquent witness to this. Off the shore of Cancún you will find the Isla Mujeres, the charm of which cannot really be felt until the evening when the day trippers have gone and the small island belongs to those remaining. Romantics can visit the ruins of Hacienda Mundaca, supposedly a token of affection constructed by a pirate of the same name.