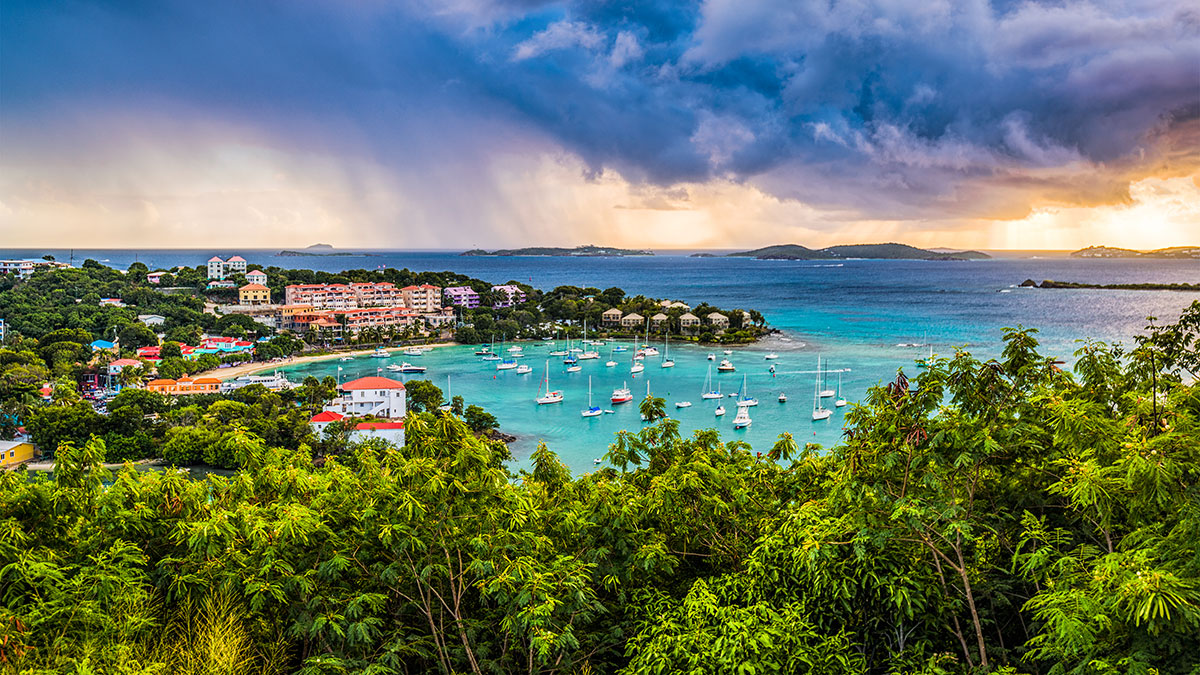 The animated St. Thomas (with around 50,000 inhabitants) is one of the top destinations for cruises. With around 3,500 inhabitants, St. John is somewhat quieter. Nearly the entire island is part of a national park which, in addition to fascinating flora and fauna, features a number of fantastic bays. Around 30 miles south, St. Croix is the largest island in this group of islands under U.S. administration. Life is contemplative here too, where much of the island is also part of a nature conservation area.

Americans discovered the Virgin Islands as a holiday paradise in the 1960s. Up until then, sugar cane cultivation had dominated the economy; today it is tourism. Visitors primarily cherish the islands as a Mecca for watersports, a paradise for divers and sailors. On land, the American way of life is upheld, and the islands have among the highest living standards in the Caribbean.

While the Virgin Islands in general offer breathtaking natural beauty, this is especially the case with Buck Island. In the underwater park at St. Croix, there are two nature trails marked with arrows for divers which lead from the beautiful Turtle Beach. The two diving routes marked on the sunken stone posts have one thing in common: an incomparable view of the fabulous underwater worlds.

Exotic and friendly sea creatures pass before the eyes of divers in these channels. Whether it's iridescent parrot fish, diadem emperor fish, wrasse or bold trumpet fish, they will all fascinate you with their bizarre shapes and bright body colors. The surface of Buck Island is a natural conservation area with an arid steppe, cacti and beautiful beaches. In addition to many rare species of land animals, pelicans and sea turtles also live on this small island.

Charlotte Amalie (around 15,000 inhabitants), the capital of St. Thomas, not only lures visitors due to its great bars, restaurants and clubs. The key phrase "tax-free" is what primarily attracts large numbers of tourists to the pretty shopping streets and shops. Perfume, alcohol, fashion goods and high-tech items can be bought here for up to 50% less than normal commercial prices.

However, there is more to Charlotte Amalie than the tax benefits. Colorfully painted houses in narrow streets warrant a wander around the city which will take in, among other things, the oldest synagogues in the western world. The St. Thomas Synagogue, built in 1796, is on Crystal Glade and, together with the Weibel Museum, possesses an interesting archive on the history of the local Jews. This island, where the road signs are written in Danish and people drive on the left side of the road, will remind you of colonial times. Here, you will also find one of the oldest buildings in the U.S. Fort Christian was constructed in 1672 by Danish settlers. It was used as a prison up until 1982 before housing the Virgin Islands Museum, which today hosts a collection of Indian artifacts and evidence of the island's rich history. The nearby Seven Arches Museum, with its beautiful flower gardens, bears witness to the Danish colonial past.

The capital of St. Croix, with its 3,000 inhabitants, resembles a European museum village in the tropics: quirky streets, wrought-iron doors, respectable front gardens and lovingly painted façades. It is this ambience, skillfully preserved from Danish colonial times, that appeals most to many visitors. Some buildings still survive from this era and thus create an air of nostalgia.

Numerous interesting historical sites are still waiting to be investigated. For example, try exploring Fort Christiansvaern (built 1774) with its old cannons, the former warehouse of the Danish West India and Guinea Company (today the post office and police station), the Government House with ballroom and gardens which can sometimes be visited, and the 1856 Danish Customs House. The art gallery housed in the former customs house is more modern. It is also well worth strolling around the dockyard area, which has a very particular charm. Christiansted therefore not only attracts nostalgics; day tourists from cruise ships are also among those who come here to shop, and for good reason.

At Coki Point, northeast of Charlotte Amalie, you'll find the only aquarium of its kind: Coral World. Through glass, visitors can marvel at coral fish, sharks and other exotic sea inhabitants. The Undersea Observatory also provides an insight into the natural underwater world.

The giant basins, with a capacity of several thousand gallons, are an ideal place for an excursion, particularly for families. Founded in 1978 and seriously damaged by a hurricane in 1995, the aquarium was rebuilt and reopened in 1998. Numerous attractions have since lured around 150,000 visitors a year to Coral World. With diving equipment you can, for example, get into the water with the fish. The daily shark feeding session, in which freshly caught fish are thrown to the carnivores, is particularly exciting and provides a fascinating yet gruesome spectacle for visitors. A seahorse farm, a tank with rays and shark breeding are other highlights and the lectures by marine biologists working there can be extremely interesting.

After Christiansted, Frederiksted is the most important place on St. Croix. It is mainly people on cruises who come to this small town; the modern Ann E. Abramson pier has space for two cruise ships. From the pier you can see a large rust-colored building: Fort Frederik was built in 1760 and is the most important site of the slave uprising of 1848. The museum housed inside it tells the tale of these events and is connected to an art gallery.

Other architectural highlights are St. Paul's Anglican Church and St. Patrick's Catholic Church from the 19th century, which are both located in Prince Street. Somewhat further out is the Cruzan Rum Distillery - the last and only large rum distillery on the U.S. Virgin Islands. During the short 20-minute guided tour, you will experience how the famous "Aroma of the Caribbean" is made from sugar cane. A glass of rum is, of course, included in the tour.

With its 1.5 mile-long sandy beach, Magen's Bay on the northern coast of St. Thomas embodies the vision of a dream beach in the Caribbean. It offers the ideal conditions for a successful day of swimming, even for families, since the shore slopes away gradually and the gentle surf is harmless for children. With views out over the several small forested islands, you can doze away an afternoon quite happily.

Nearby, golfers can enjoy the 18-hole, par 70 Mahogany Run golf course. Located right next to the coast above the cliff tops, the course offers golfers a unique setting with special challenges. You can get a view of the idyllic coastal scenery from the famous Drake's Seat viewpoint further inland. Sir Francis Drake allegedly sat here to contemplate and count his ships after various raids.

Time and a certain constitution are required for the paddle tour through the Mangrove Lagoon in the southeast of St. Thomas. Other parts of the lagoon are, quite justifiably, under conservation. Rare birds find an ideal nesting place in this idyllic scene and exotic animals dwell in their perfect habitat. With the paddle boats, visitors can experience an in-depth insight into the hidden interior of the Caribbean and can also go where motor boats are not allowed.

The mangrove trees growing there have adapted perfectly to the surroundings, having the ability to filter food and moisture from sea water. At the same time, mangrove trees attract a variety of interesting water creatures, spiders, beetles and types of birds which can also be seen on a paddle tour.

The most untouched of the U.S. Virgin Islands is most certainly St. John, which lies around 20 minutes by boat away from St. Thomas. Up until the end of the 1950s, St. John was privately owned by the American multi-millionaire Laurence Rockefeller, who finally donated two thirds of the small 45 sq. mile island to the U.S. government. Since then, the National Park Service has taken care of maintaining this mountainous natural paradise with its numerous dream-like bays.

Cruz Bay is the main town on St. John, but only comprises a tiny settlement and a meadow as a market place. The small St. John's Museum, which is dedicated to the slave uprising of 1733, is of particular interest. Most tourists, however, go to St. John for the unique bays. The wonderful beaches can be reached via Northshore Road which runs along the impressive coast through the national park. Hawksnet Beach is the most well known haven for locals and stressed stars from the music and film scene. Divers prefer Trunky Beach, where you can follow the coral via a signposted underwater path. It is also worth exploring the land. With nearly 1,000 species of birds and 150 types of land animals, the national park is a true natural paradise. It is best to marvel at the island's flora and fauna from the 22 marked paths.