Venice - a City of Magnificent Canals and Urban Planning Character 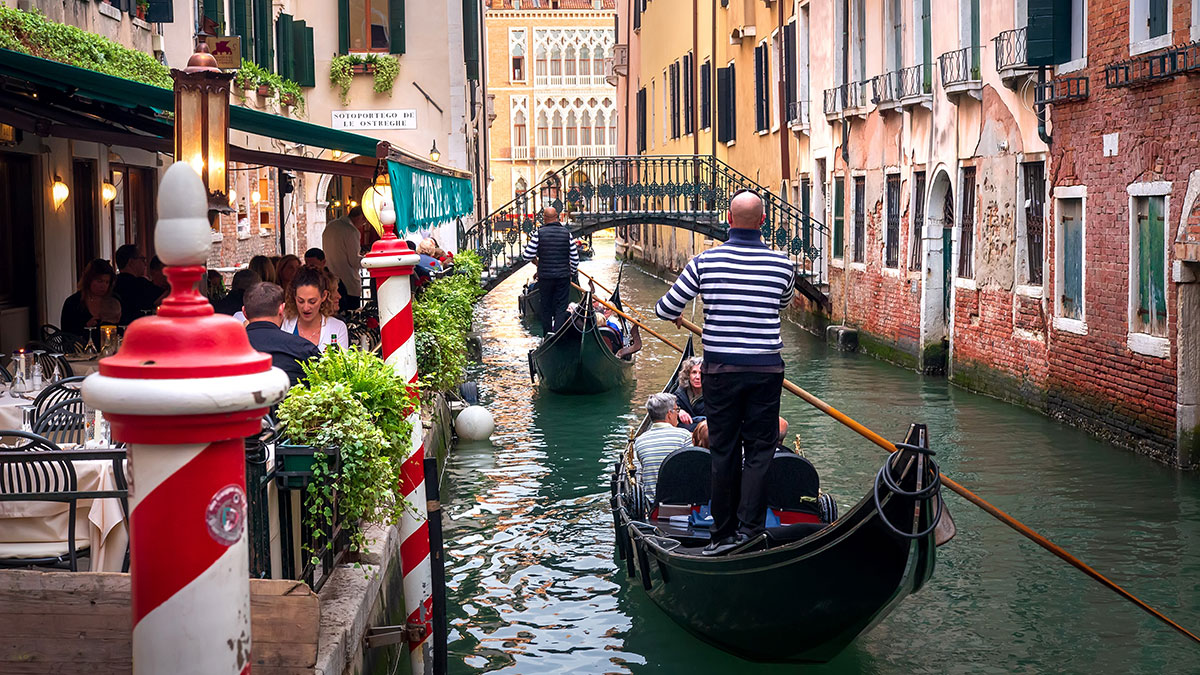 With almost 15 million visitors per year, Venice is one of the top ten travel destinations worldwide. That's hardly surprising. No other place compares to the lagoon town, with its unique location, magnificent canals and urban planning character.

All of this is Venice, where the past is still part of the present. This storied city proves this time and again, drawing visitors to major international contemporary art events and the many festivals held throughout the year, such as the carnival.

The Dorsoduro quarter is living theater: the hustle and bustle of the fruit, vegetable and fish stands is played out against a backdrop of medieval houses. An old stone inscription on the façade of the tanners' and dyers' guild hall proclaims the legal minimum lengths of the fish on sale: eels must be at least 9 inches long, sardines no shorter than 3 inches. Venetians young and old alike exchange words of wisdom in the shade of the trees around the square, cappuccino cups clatter in the small cafés and bars, and while a bakery and a wine merchant satisfy the appetites of some, a book shop caters to that of others.

... and anyone who also wants to indulge in the pleasures that art has to offer can gaze in awe at the ceiling frescos of Tiepolo in the Scuola Grande dei Carmini. Theater festivals and concerts are also held on the Campo during the high season.

Venice's largest and most magnificent canal is lined with dense rows of impressive palaces, churches, apartment houses and museums that form a unique ensemble of buildings from different architectural periods. The best way to get to know the Grand Canal is with a sightseeing tour on a Vaporetto.

The shining white Baroque gem that is the church of Santa Maria della Salute was built as thanks for the end of an outbreak of the plague. The interior is decorated by, among other things, a group of sculptures representing the church's construction, a ceiling fresco by Titian, and paintings by Tintoretto and Bellini. Venice's most famous bridge is the Ponte di Rialto, a mighty (now souvenir) shop-lined marble archway that has spanned the canal since the end of the 16th century. The best example of Gothic architecture along the Grand Canal is the Ca'd'Oro, an oriental-looking palazzo which now houses a collection of paintings.

The Doge's Palace: The Palazzo Ducale

The three-winged Doge's Palace, built in its present form from the 14th to early 17th centuries, was once the center of power in the Venetian republic and the duke's residence. The Porta della Carta, where petitioners presented their requests to members of the Great Council, is edged with allegorical figures and ornamentation. It is considered a masterpiece of Venetian Gothic architecture.

The Scala dei Giganti derives its name from the larger-than-life figures of Neptune and Mars who symbolize Venice's former power at sea and on land. The dukes of Venice were traditionally crowned on the top step. The rooms – some of which may be closed for renovation or special exhibits – are fascinating for their splendor and luxurious decorative detail, including frescoes and paintings by Veronese, Tintoretto and Titian.

The Accademia contains the most important and comprehensive collection of Venetian painting from the 14th to 18th centuries. The first items of the current collection were brought together by the painter Giovanni Battista Piazzetta in 1750. Over the centuries, the collection steadily grew, and today the Accademia exhibits 800 works in 24 halls, ranging from Gothic panel paintings, 15th- and 16th-century Renaissance works, landscapes, and genre paintings of the Baroque and Rococo periods. The works of such masters as B. and A. Vivarini, P. and L. Veneziano, Bellini, Giorgione, Tintoretto, Titian, Tiepolo, Veronese and many others can be seen.

The Accademia is best visited in fine weather, when the rooms are bathed in sunlight. It is also less crowded in the off-peak season.

St. Mark's Basilica is considered a gem of medieval architecture. The domed cruciform church we see today mostly dates back to the 13th century, although it continued to be modified and ornamented until the 15th century. The main façade features five mighty portals, blind arches decorated with mosaics and topped by gilt towers decorated with figures of the Evangelists, and late Gothic figured gables.

The highlights of the basilica's interior include the Pala d'Oro, a gilt high altar retable decorated with thousands of pearls and gemstones, and golden mosaics covering an area of 45,639 sq feet. Also noteworthy is the Tesoro, or treasury, containing (among other things) gold and silver Byzantine icons and reliquaries, and the precious throne of the doge (1500).

Napoleon called the Piazza San Marco "the finest drawing room in Europe". Today, it primarily serves as a place for tourists to feed pigeons. The architectural unity of the surrounding buildings lends the plaza complex its majestic air. Aside from the Doge's Palace and St. Mark's Basilica, the former republic's administrative buildings are also striking: the arcade buildings of the 15th-century Procuratie Vecchie to the north, the 16th-century Procuratie Nuove to the south, and the Ala Napoleonica (now housing the city's civic museum) to the west.

Work began on the Campanile, the oldest structure on the square, in 912. From the viewing platform at the top, you get a breathtaking view of the city and the lagoon from a height of 320 feet. The terrace of the Torre dell'Orologio, a 15th-century clock tower, also offers splendid views. The venerable Caffè Florian is a good place for a rest, and counts Goethe, Proust and Thomas Mann among its more noteworthy guests.

The Mercato di Rialto near the Rialto Bridge provides a picturesque alternative to all the culture. Not only is it Venice's loveliest fish, fruit and vegetable market; it is also the city's oldest (opened in 1079). In 1907, the traditional fish market was replaced by the Pescheria, a neo-Gothic hall with open arcades and imaginatively decorated columns resting on traditional larch wood pilings.

Together with the adjacent Erberia (fruit and vegetable market), the Pescheria is a feast for the senses of early morning visitors. Freshly-caught fish and seafood from the lagoon are appetizingly displayed between blocks of ice, while crisp, colorful fruit and vegetables are piled into artistic pyramids. Even Hemingway sang the praises of the market's wide selection, charming displays and incomparable atmosphere.

The island of Murano, northeast of Venice, primarily became famous through its glassblowing. Venetian glass blowers moved from the mainland to the island as early as the 13th century, where they guarded the well-kept secret of glass production until the 17th century. The Venetian monopoly wasn't broken until the 18th century, when glass manufacturing blossomed in Bohemia.

Murano finally experienced a lucrative revival with the advent of tourism in the early 19th century. Since then, cheap kitsch and tasteful craftsmanship have lived side by side. Today, hand-crafted glassblowing can be admired in the island's numerous studios and adjoining gift shops, where you'll find glass beads, crystal glasses, mosaic pieces, jewelry, mirrors, lamps and figurines – in short, everything from high-quality artistry to run-of-the-mill wares. The Museo dell'Arte Vetrario in Palazzo Giustinian provides a wide-ranging overview of glass production through the centuries.

The island of Torcello, an hour's ferry-ride from Venice, is one of the most attractive lagoon islands on account of its historical art treasures. Once home to 80,000 people, Torcello was considered an important trading center in the 5th century and was elevated to a bishopric when the cathedral of Santa Maria Assunta was built there in the 7th century. The reconstruction of the cathedral in 1008 gave this, the oldest site on the lagoon, a Venetian-Byzantine feel. Its interior is decorated with wonderful mosaics in the Ravenna style, including "The Glorification of Christ" and "The Last Judgement". Also worth visiting are the baptismal church of Santa Fosca, an octagonal building dating back to the year 1100, with elegant columned halls, and the Museo di Torcello, a must-see which enthrallls visitors with its archaeological finds and artworks.

The smallest of the well-known lagoon islands, which now has barely 10,000 inhabitants, is captivating because of the beauty of its landscape, its isolated location, tranquillity and unique flair, far from any tourist kitsch.

Originally created as a charitable institution for the victims of epidemics, this architectural masterpiece was erected in the 16th century under the master builders Bartolomeo Bon, Scarpagnino and Sante Lombardo. Donations enabled this Renaissance palace to be built, and its ambience has remained unchanged ever since, with its Corinthian pillars and elaborately decorated façade, granting a fascinating insight into the past.

The building consists of a hall on the ground floor, a magnificent staircase and a beautiful main hall, and houses the largest collection of Tintoretto paintings in the world; 56 wall and ceiling frescoes in all. Tintoretto (1518-1594), who came from a humble background, honed his skills in the workshop of Titian – the man regarded as the greatest Venetian painter of the 16th century alongside Tintoretto – before spending more than 20 years exquisitely decorating the inside of the palace with scenes from the Old and New Testament.

Andrea Palladio (1508-1580) created this magnificent church in 1566, as well as the Benedictine monastery which is owned today by the Vittorio Cini Foundation and used as a center for art and historical research. The pillars and triangular gable of the church façade bear the distinctive hallmarks of this, the greatest of the Renaissance architects, who sadly did not live to see the complex completed by Vincenzo Scamozzi in 1610.

The three-nave interior of the church is designed in the shape of a cross and enthralls visitors because of the numerous artworks by J. Bassano, G. Campagna and J. Tintoretto, whose world-famous late work 'The Last Supper' can be admired on the right wall of the chancel. Campagna's 16th-century bronze masterpiece on the high altar is no less famous. It depicts the four Evangelists supporting a globe on which the Almighty is enthroned. If you take the elevator up to the Campanile, you'll get a fantastic view over the lagoon and the streets of Venice, and even as far as the Alps on clear days..

An impressive equestrian monument erected in memory of Bartolomeo Colleoni, the condottiere (commander of the mercenaries), scowls down at passers-by on the Campo. Also dubbed the "Square of Marvels" due to its magnificent buildings, the Campo is dominated by the Gothic church of Santi Giovanni e Paolo, known as "San Zanipolo" in the Venetian dialect, built by Dominican friars from 1234 onwards. The lower part of the wide-shouldered brick façade looks incomplete, but the upper part appears harmonious. The central portal by Bartolomeo Bon is considered a masterpiece of late Gothic sculpture.

Huge columns divide the interior of the church into three naves, which are almost bursting at the seams with beautiful works of art, among them nine scenes from the life of San Vincenzo Ferreri by Giovanni Bellini and the ceiling painting 'The Glory of St. Dominic' by Giovanni Battista Piazzetta. Exquisite marble tombs and incrustations, created by the Lombardo family of architects, form a large proportion of the precious decorations. The bodies of no less than 25 doges rest in this church.