Vancouver - a City Set Against the Background of Snow-Covered Mountains 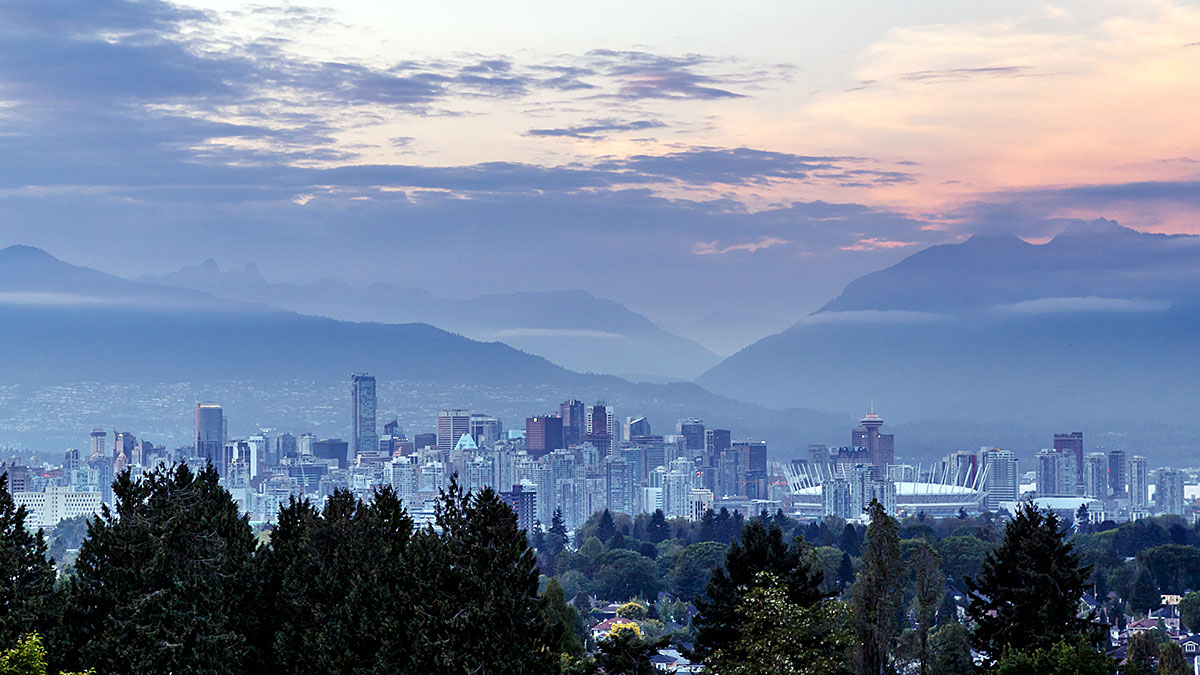 Due to its incomparable position between Fraser River and the sea, set against the background of snow-covered mountains, Vancouver is one of the most beautiful cities in the world. Skyscrapers and parks are found next to each other, elegant shopping streets and the historic quarters with their restaurants are perfect for a stroll.

The University of British Columbia Museum of Anthropology provides an introduction to the culture of the Indians while galleries, music and art festivals represent the culture of today. Robson Square, with its wide shopping arcades, sets the tone for a more youthful area. The thousands of small shops in Chinatown pulsate to the fast rhythm of an Asian city.

Gastown and Granville Island are examples of successful urban redevelopment. Formerly a long-degenerated harbor area, Granville now hosts sought-after addresses of restaurants and boutiques. Here, life takes place in the ex-warehouses that lie in the shadows of the Granville Bridge. The Coast Mountains and Vancouver Island are right on the doorstep – excursions to these provide the perfect contrast to city life.

The heart of Downtown stretches over three blocks. This beautiful, elongated complex with its planted terraces, waterfalls and benches was designed by the famous Canadian architect Arthur C. Erickson. He also built the glass courthouse at the southern end of the square. Its counterpoint on the northern side is the old courthouse which, after conversion, now houses the Vancouver Art Gallery. The works by Emily Carr, the most famous painter in western Canada, exhibited in one of the rooms makes this well worth a visit.

The center of the square features an elaborate grid of stairs and ramps on two levels. While on the top level you can enjoy the park atmosphere, you will find a conference center, the Tourist Office, cafés and even an ice rink under a Perspex dome in the shadowy lower level. Countless boutiques and speciality restaurants invite you to while away the time along Vancouver's main window-shopping boulevard, Robson Street. Particularly in summer, this street is bustling until the early hours.

Science World, a remnant of Expo 1986, is in the southeast of Downtown at the end of False Creek. The giant silver shimmering stainless steel dome with its honeycomb-like exterior is still one of Vancouver’s most visible landmarks. Scientific phenomena such as sound and light are visualized using interactive animations which are particularly appealing to children. The most popular are the "Arcs and Sparks" electricity show, the laser show and, last but not least, the Muppets by Jim Henson.

A further attraction is the Omnimax film theater on the top floor. Its 85-foot wide curved silver screen enables, especially with 3-D films, the borders between the virtual and reality to merge, and bestows breathtakingly dizzy experiences on its audiences. A cafeteria and souvenir shop round off this attraction.

Vancouver’s old town is located right next to the harbor area along Water Street. The plan at the beginning of the 1970s to build a highway through the then relatively derelict city quarter was thwarted by citizens' initiatives. The historical core was lovingly restored in the mean time. Chic boutiques and pubs can now be found in the old brick buildings and warehouses. Gas lanterns, paved walkways, maple trees, flower markets and street musicians create a holiday atmosphere. The Landing, an old warehouse from 1905, now houses a shopping mall.

Built in 1875 style, the famous Steam Clock, the only steam clock in the world, is located at the crossroads with Cambie Street. Onlookers surround the steam monster, which welcomes them with loud whistles every quarter of an hour. The bronze statue of Gassy Jack, enthroned on a whisky barrel, can be found in Maple Tree Square. The former captain who set up a saloon there is seen as the founder of the town. Gassy’s Town evolved into Gastown.

After those in San Francisco and New York, this is the largest Chinatown in North America, established in the 1880s when 10,000 Chinese were brought in to build the railways. Today, around 150,000 Chinese live across all of Vancouver. Chinatown extends into Downtown along Pender Street between Carral Street and Gore Avenue. When you pass through the huge colorful gate, for a moment you feel like you’re in a different world. Everything here is bustling, countless small shops offer an abundance of exotic delights, and restaurants specialize in the various Chinese regional cuisine.

With its pond and a small temple, the Dr. Sun Yat-Sen Classical Chinese Garden was created for Expo 1986 by craftsmen from Suzhou in Ming-period style, representing an oasis of peace and quiet. Those interested in the curios can also visit the Sam Kee Building right at the entrance to Chinatown and which, at only 6 feet wide, is said to be the narrowest building in the world.

Canada’s most beautiful and largest city park is situated at the tip of the peninsula Downtown. Once a home to Squamish Indians, today it is an ideal recuperation area for stressed city dwellers. There are extensive walking trails, cycle paths, sport complexes of all types, beaches, picnic areas, horse-drawn carriages and much more. A one-way street, Scenic Drive, runs counter-clockwise along the bank. Opposite Deadman’s Island there is a superb group of totem poles that have been relocated here. In the western area of the park you will find the rest of the original wilderness with giant cedar trees and douglas firs.

The main attraction is the aquarium – the largest in Canada. Children particularly enjoy the shows with killer whales and dolphins. It also features white belugas, tide pools with sea animals you can touch, and a petting zoo.

The 287-acre, largely artificial peninsula in False Creek under Granville Bridge was a derelict industrial slum which was transformed in the 1970s as part of a project for successful urban redevelopment. Today, Granville Island is a lively meeting point for the alternative scene with bars, cafés, craft shops, street musicians and jugglers.

On the northwest side of the peninsula, the covered Public Market with its overflowing stands and snack kiosks attracts the masses. Immediately next to this are the Art Club Theaters. On the northeast side, you will find the Emily Carr College of Art & Design, an art college with an exhibition hall. The picturesque houseboat settlement of Sea Village lies in the water in front of it. In the southern section, you can try the excellent beer in a tour of the Granville Island Brewery Co. The Kids Only Market, a shopping and play paradise for children, is also situated in this corner: behind the Waterfront Theater, they spray each other with rotating water cannons in the supervised Water Park.

Protruding over English Bay, the spectacular glass and concrete building (builit in 1976 by Arthur C. Erickson) houses one of the largest collections of the lost culture of the West Coast Indians. This spectacular museum is an absolute must.

The most beautiful old totem poles and a Kwakiutl lintel with bulky frame can be found in the bright Great Hall. Handicrafts, jewelry, Chilkat blankets, beautifully plaited hats and chests with their side walls made from bentwood (Bentwood Boxes) are all displayed in the glass cabinets. The giant dancing masks of the Kwakiutl are particularly fascinating. The famous giant sculpture of the renowned Haida artist Bill Reid, 'The Raven and the First Men', can be found in a rotunda under a glass dome. A giant raven watches over the clumsy efforts of men trying to work their way out of a shell. Next to the museum, the Totem Park brings life into line with nature.

Little Mountain, the highest peak in the city at 500 feet, stands out in the Queen Elizabeth Park. In good weather, it offers a wonderful view of the Downtown skyline against the backdrop of the Coast Mountains. Further to the south it is sometimes possible to make out Mount Baker, located in the U.S. state of Washington. There were originally two quarries here which supplied pavement material for the first streets. Toda,y this area is a beautifully landscaped 125-acre hectare park with azaleas, rhododendrons and many other plants.

At the eastern edge of the park, an arboretum features the trees and bushes which flourish in the coastal region. Another attraction is the Bloedel Conservatory, in which an abundance of tropical plants thrive under a glass rhombus dome. Many take refuge here in bad weather; in a tour through the different climatic zones, you will be surrounded by noisy exotic birds.