Toronto - a City of 70 Nations Speaking over 100 Languages 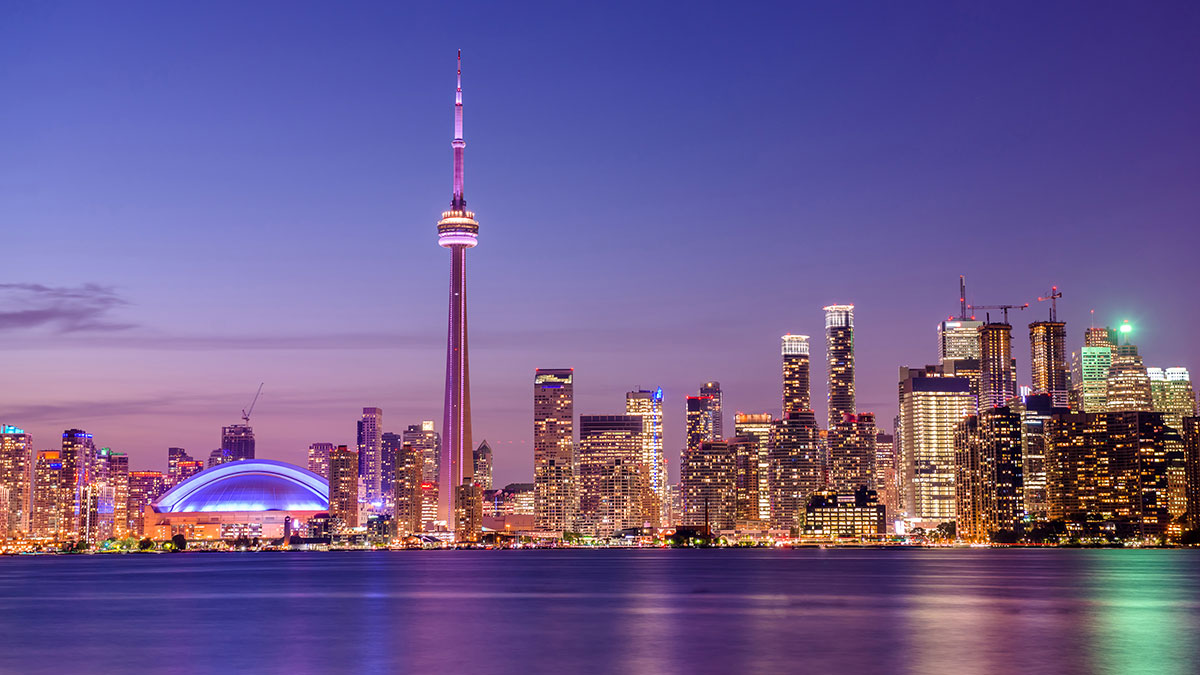 Toronto is Canada's largest city and the fifth-largest city in all of North America. With a population of 4 million, the metropolis situated on the northwest bank of Lake Ontario stretches over more than 40 square miles like a rectangular grid. As Canada's financial and cultural center and the capital of Ontario, Toronto is a booming, multicultural and, at the same time, clean and safe city. Together with the neighboring towns of Etobicoke, Scarborough, York, North York and the administrative district of East York, the Toronto area is Canada's largest metropolis.

A city that brings together people from 70 nations speaking over 100 languages, Toronto is a cosmopolitan city containing residential districts with a typically ethnic character. Several Chinatowns, Little Italy, Greektown and Cabbagetown are signs not only of Toronto's worldly attitude but also of the changes the city has undergone since the middle of the 20th century. Most of its residents used to be of British origin, but nowadays the population is made up of a wide range of cultures and ethnic origins. The Indian meaning of the city's name, which is "assembly point", now genuinely reflects the city's character. Its cosmopolitan nature is also reflected in its location beside Lake Ontario, a lake whose environmental equilibrium has been the subject of increased preservation efforts in recent years.

Toronto's stock exchange ranks second only to that of New York among North American financial markets, and Bay Street, leading down to the harbor, is comparable to Wall Street. Modern buildings like BCE Place or the Royal Bank, with its windows adorned with gold, are signs of Toronto's economic significance. Nor does this boom town lack culture: countless museums and art galleries, almost 50 theaters and concert halls, plus festivals and events, ensuring a lively arts scene.

Founded by private individuals in 1900, today the Art Gallery of Ontario is one of North America's most important art galleries. Divided into three main subject areas, the collection houses over 30,000 works illustrating 1,000 years of Canadian and European art history. The English sculptor Henry Moore is very well represented. In addition to a dozen bronze sculptures, the gallery houses over 1,000 other works by the artist, who died in 1986.

Almost half of all the works are by Canadian painters and, in particular, contemporary artists. In addition to Inuit art, the gallery also contains works by artists whose names are much more familiar to visitors. The third themed exhibition includes works by Picasso, Van Gogh, Degas, Gauguin, Monet, Renoir, Rembrandt and Tintoretto. 'The Grange', a country house dating back about 200 years, to the days when Toronto was founded, is one of a kind. Renovated in the style of the 1830s, it was once the actual home of the gallery.

Toronto's top attraction, the CN Tower, completed in 1976, is an outstanding feature of the city's skyline. The world's highest freestanding building at 1815 feet, it attracts some 2 million visitors a year to its observation decks at heights of 1,135 and 1,466 feet. Four high-speed elevators race up the outer wall of the tower as far as the floor with the first observation deck, which also holds a revolving restaurant and night club. The ascent takes less than a minute.

At this level, 1,135 feet up, you'll find the first observation deck and a revolving restaurant with a glass floor. For a few more dollars, you can ascend a good 300 feet higher to what is known as the Space Deck, the world's highest observation deck, 1,466 feet up. Here, a breathtaking view, extending up to 70 miles, opens up for those with a good head for heights. At high wind speeds the tower sways, and its tip moves up to 10 feet. Things are more peaceful at the foot of the tower, where a wide-screen cinema and a flight simulator are the attractions for those who prefer to keep their feet on the ground.

Nathan Phillips Square is the central square between the Old and New City Halls. Its huge size is impressive, and its main feature is a Henry Moore sculpture, 'The Archer'. The most dominating building is the New City Hall. It was designed by leading Finnish architect Viljo Revell in 1965, and comprises two curved skyscrapers over 20 stories high, framing the flat parliament building. Today the Old City Hall, a neo-Romanesque building dating from 1899, is one of Toronto's main courthouses.

The neighboring Eaton center is a more recent addition. Built in the 1970s and extended in the '80s, it is still the city's best-known shopping center today. Some 350 shops, most of them very elegant, offer a range of high-quality goods on several floors. The 'Eaton Emporium', named after company founder Timothy Eaton, declared itself bankrupt in 1999 after 130 years, but in cooperation with the Sears department store chain it proved possible to save the shoppers' paradise.

You can't visit Toronto without going to see Niagara Falls, even though they lie a good 90-minute drive south of the city. They are one of the world's biggest, most imposing and most famous waterfalls, and of course also one of the world's most visited and most photographed waterfalls - a good 12 million tourists take an estimated 100 million photos every year - huge numbers. And this also applies to the falls themselves, of course - 45 million gallons of water per minute shoot over 2-mile wide rims a good 200 feet into the depths, then pour into Lake Ontario through a gorge up to 985 feet wide. The Canadian Horseshoe Falls account for the largest part (90%) of this spectacle situated on the border with the U.S. The American Falls on the American side of the border make up the smaller, less spectacular part.

The 'thundering water' (this is what the Indian name means) can be marveled at from many viewpoints. The view from the terrace, wet with spray, of the Table Rock visitor center is a unique experience. You can get even closer to the raging waters by taking a journey behind the falls. An elevator takes visitors to the Scenic Tunnels, where you can follow underground passages to various viewpoints far below the top of the falls. Or you can take a boat trip aboard the Maid of the Mist, almost right up to the foot of the cascading waters.

The Ontario Science Center offers an opportunity to experience science first-hand in an easy-to-understand way. The Center is well worth the half-hour journey and the rather high admission fee. Situated a good 7 miles from the city center, across the Don Valley, the Science Center offers an unforgettable experience. In the Timescape Zone, you can unearth the mysteries of time. The big technology section offers imaginative experiments and clear explanations, providing fresh insights. As well as many conventional exhibits and exhibitions, there are also interactive areas. Here, visitors can embark on their own experiments and thus come to understand scientific connections.

There are fascinating discoveries to be made in the fields of laser technology, telecommunications, optics, biology, meteorology, physics and space travel. The Omnimax Theater satisfies any further appetite for information, while a restaurant fulfils culinary needs. If you can, avoid visiting the Science center on the weekend, as the large crowds and longer waiting times may spoil your mood.

The Royal Alexandra Theater, built in 1907, is impressive for its wonderful interior décor of gold and velvet. Toronto, the third-largest theater center in the English-speaking world, is incomparable in terms of the quality and variety of its stage productions. The Mirvish family, who own all the important theaters, have been synonymous with breathtaking world-class stage productions for generations.

Completely restored and renovated only recently, the Royal Alex sparkles, as the locals say, with traditional charm and top-quality performances. As before, an usher shows guests the way to their red velvet seats. Under countless lights, visitors can admire and applaud both great Broadway stars and local talent. Ticket prices range from 16 to 65 U.S. dollars.

The Royal Ontario Museum, usually known as the ROM, is one of the city's top sights. As Canada's largest museum and possibly the best museum in Toronto, it houses a comprehensive collection of exhibits illustrating art history and cultural history, archaeology and the natural sciences. The ROM has become famous throughout the world for its impressive collection of oriental art. It also has a well-designed and extremely interesting exhibition covering dinosaurs and mammals.

The ground floor houses the world-famous collection, covering 5000 years of Chinese history. The second floor is home to the natural sciences exhibition, with dinosaur skeletons and mammal biotypes from Ontario. In the Discovery Gallery, children can perform exciting experiments and investigate subject areas appropriate to their age. On the next floor, the historical focus is on Egyptian mummies and Greek and Roman exhibits. The 'Canadian Heritage' exhibition on the lower ground floor is a wonderful way to conclude your visit.

The SkyDome, situated at the foot of the CN Tower, is not nearly as high as its neighbor but is equally impressive. The sports arena, with room for 65,000 spectators, accommodates competitive sports of all kinds as well as rock and pop concerts. Designed in response to the Olympic stadium in Montréal, the SkyDome, opened in 1989, makes an immediate impression with two superlatives - the world's first completely retractable domed roof and the world's largest video screen.

The incorporation of the SkyDome Hotel can truly be considered an architectural masterstroke, with its 70 two-story suites offering an excellent view of the field. When the Blue Jays (baseball) or the Argonauts (football) are playing at home, the arena fills up and gets very noisy. But the arena has more than just sporting events to offer - many restaurants, snack bars and programs of entertainment provide additional spectacles. If you want to see the arena in peace, in between the various events, you can take a guided tour. It begins with a film show about the start of construction and offers a lot of interesting background information.