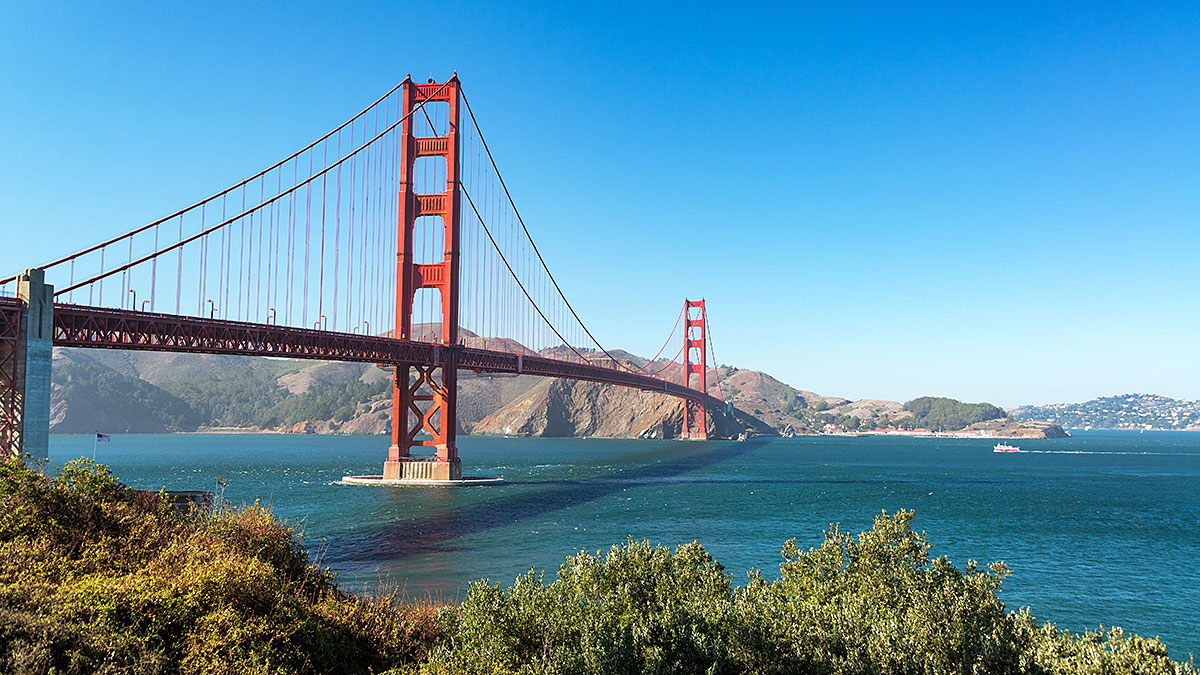 Cable cars, steep streets, colorful Victorian houses, the island penitentiary of Alcatraz - the attractions of San Francisco are world famous. Innumerable books, films and pop songs tell of the city's myth, and millions of tourists revel every year in the unique vitality around the Bay.

The view from the Golden Gate Bridge reveals a city sprawling across the hills between the Bay and the Pacific, more multicultural and vibrant than almost any other city in the U.S. Its inhabitants number around 730,000, coming from all corners of the Earth. The colorful markets and brightly colored murals of the Hispanics in the Mission District and the bustle of America's largest Chinatown are just two aspects of the city's diversity.

The modern city scene is marked by skyscrapers in the Financial District and yuppies smartly dressed in suits and ties, yet the traces of the flower power generation and the gay movement of the 1970s are everywhere to be seen. In San Francisco you'll find much that is curious, and much tolerance.

A zebra-striped cube with a slanting glass roof, surrounded by russet brick walls - the SFMOMA stands post-modern and photogenic against the eastern skyline of the city. Swiss architect Mario Borra added this spectacular building to San Francisco's premier sites for around $60 million in 1995.

The museum has four floors housing extensive collections and contemporary exhibitions. An impressive open-plan staircase leads visitors to the art of the 20th century, a spectrum ranging from architecture and design through painting to multimedia and photography. Alongside works by Rauschenberg, Rothko, Koons, Kiefer and others, a particular highlight is considered to be the large collection of photos from the 1920s and 1930s.

Alamo Square is one of the districts of San Francisco that can truly be called a "historic district"; it should be visited only by car or taxi because the surrounding areas are not always safe. Tourists can make their own postcards of the San Francisco skyline from the park's hills. Natural vegetation and splendid Victorian houses in the background make Alamo Square probably one of the loveliest green oases in this northern Californian city.

The grand houses around the park are called the "painted ladies" because of their pretty pastel-colored façades. The splendid row of houses on Steiner Street in particular is considered the best known example of the Queen Anne style, developed around 1890. It is distinguished by pointed gables, nooky bay windows and rounded arches. Some of these houses are now listed as historic monuments, and serve as Bed and Breakfast locations.

Until it was closed in 1963, this island penitentiary off San Francisco was considered the most secure prison in the United States. Any attempt to escape was thwarted by the extremely strict conditions of confinement and the 1.5 miles that would have to be swum through ice cold water to reach the mainland. Serious criminals like the mafioso Al Capone, George "Machine Gun" Kelly and the kidnapper Alvin Karpis did time in these spartan cells, some of which have been restored to their original state.

The offshore penitentiary has been opened to the public since 1973. Visitors can tour the 12.5 acre facility, and can learn about the legendary prison by listening to an informative tape in any one of six different languages. Seeing the restored cells, the prison yard, and the personal items that were permitted to the prisoners gives a good impression of everyday life here.

The reputation of the people of San Francisco as tolerant and open-minded is due principally to one particular district of the city. The Castro District has been a rallying point for those espousing the gay and lesbian movement since the early 1970s. When the hippie community in Haight-Ashbury gradually broke up, many proponents of free love moved into this originally Irish Catholic working class district. A unique scene soon emerged, with freaky bars and cafés, along with extravagant boutiques.

Castro Street in particular has established itself as a favorite shopping strip, extending from the Market intersection to 19th Street with fantastic shops and exotic restaurants, attracting a predominantly same-sex-oriented, trendy clientele. The architectural keynote is the Castro Theater, a cinema with a stucco façade built in 1924. Every year on the last Sunday in June, the Lesbian Gay Transgender Freedom Day Parade passes through Market Street as a demonstration for equal rights for gays and lesbians.

The downtown Chinatown Gate in the city center, with its green roofs, stone watchdogs, dolphins and serpentine dragons, is the door to another world. The ten adjacent blocks to the north are thoroughly Asian. The main artery of the Chinese quarter is Grant Avenue. Street and shop signs are in two languages, and Cantonese or Mandarin are spoken in grocery stores, butcher shops and supermarkets. Pagoda-style roofs and balconies set the scene, and the exotic aroma of spices and herbs transports the visitor to another continent. To celebrate the Chinese New Year, the streets are adorned with red lanterns and colorful garlands, and gorgeous processions pass through the streets.

It is worth looking down side streets, such as Waverly Place, where there are still small Buddhist temples in the upper floors of some houses, open to visitors. For those interested in Chinatown's history, photographs document the past in the unpretentious Chinese Historical Society Museum.

Along with the Transamerica Pyramid, the most monumental sight to catch the eye on San Francisco's skyline is Coit Tower. It stands on top of 300-foot high Telegraph Hill, where signals from ships entering and leaving San Francisco Bay were formerly telegraphed to the harbor. When Lillie Hitchcock Coit died a rich widow in 1929, she bequeathed a considerable portion of her estate to the city for the purpose of having the Coit Tower built. In keeping with her wish, the tower was dedicated to San Francisco's firemen in recognition of their superhuman rescue efforts in the aftermath of the 1906 earthquake.

On a clear day there is a spectacular view of San Francisco Bay, the city center and the financial district from the Coit Tower observation platform 200 feet above the ground, which is accessed by an elevator. The mural on the ground floor of the tower is worth a visit. 25 artists were commissioned to depict the dramatic economic plight of America in the 1930s.

At the planning stage of this steel colossus, the Golden Gate Bridge was called 'the bridge that cannot be built'. The link between the city and neighboring Marin County (spanning the 320-foot deep and almost 1.5-mile wide strait), envisioned by the architect Joseph B. Strauss, was considered a feat impossible to accomplish. The length of the proposed span and the 60 m.p.h. tidal currents presented a daunting challenge. Yet in 1937 the architect's dream came true. Within four years he had created a suspension bridge 1.7 miles in length, with two pylons reaching 745 feet up into the sky - a technical masterpiece that remains unsurpassed to this day.

130,000 cars now travel daily across the bridge, whose characteristic orange-red paintwork is constantly renewed. Vista points at both ends of the bridge offer grand views of this marvel; a statue of the architect Joseph B. Strauss stands beside an Information Center on the south side.

Golden Gate Park is a green strip 10 blocks wide extending for around 3 miles from the Pacific in the west towards the inner city as far as Haight-Ashbury. Planned in the mid-19th century, the park developed over the years with its lakes, hills, valleys and numerous paths to become a favorite recreation space for the inhabitants of San Francisco. In 1967 this park, with winding roads running through it, was the scene of the hippie Summer of Love. On Sundays the roads are now closed to traffic, and turned over entirely to the skaters.

In addition to its botanical gardens and the splendid conservatory of flowers with around 20,000 rare species of plants, the park contains non-botanical sights as well. The California Academy of Sciences is dedicated to the natural sciences. After a visit to the Asian Art Museum (http://www.asianart.org), with its excellent collection of East Asian art, the Japanese Tea Garden beckons visitors to a leisurely stroll through its grounds with its artificial ponds and pagodas.

Sausalito lies at the southeastern tip of Marin County, about 3.5 miles north of San Francisco. This once-sleepy fishing village of 7,500 inhabitants has now become a popular resort. Its picturesque hillside location, with fine houses, well-stocked gardens and steep pathways gives the place a certain Mediterranean flair. Sausalito came to prominence in the 1960s when some dropouts founded a houseboat colony in the harbor, and artists found inspiration in the idyllic setting of San Francisco Bay.

Today, only the well-heeled can afford the rent for one of the jumble of little wooden houses on the slopes, or for one of the stylish houseboats. The streets in the harbor district are lined with expensive boutiques and upscale restaurants offering excellent fish dishes. On Bridgeway Boulevard, tourists can find a plethora of souvenirs, and enjoy a magnificent view of San Francisco.

Fisherman's Wharf is a classic San Francisco tourist attraction. Once a few hundred fishermen, mostly Italian, used to moor their boats here; now there is a daily flood of tourists over the wooden piers and along the harbor side, the Embarcadero. Fisherman's Wharf along piers 45 to 39 is now the preserve of the idle and curious. Innumerable souvenir stands, bric-a-brac shops, restaurants, bars, small carousels, street acrobats and jugglers create a scene of lively bustle and happy jostling throughout the day.

You can find the odd curio for a party or children's room, or have a meal of just-caught fish or shellfish. The fresh sea breeze, the calling of the seagulls, and a colony of sea lions at the end of pier 39 create a real seaside feel. You can also admire the flora and fauna of the Pacific in Underwater World, one of the most modern aquariums in the world.