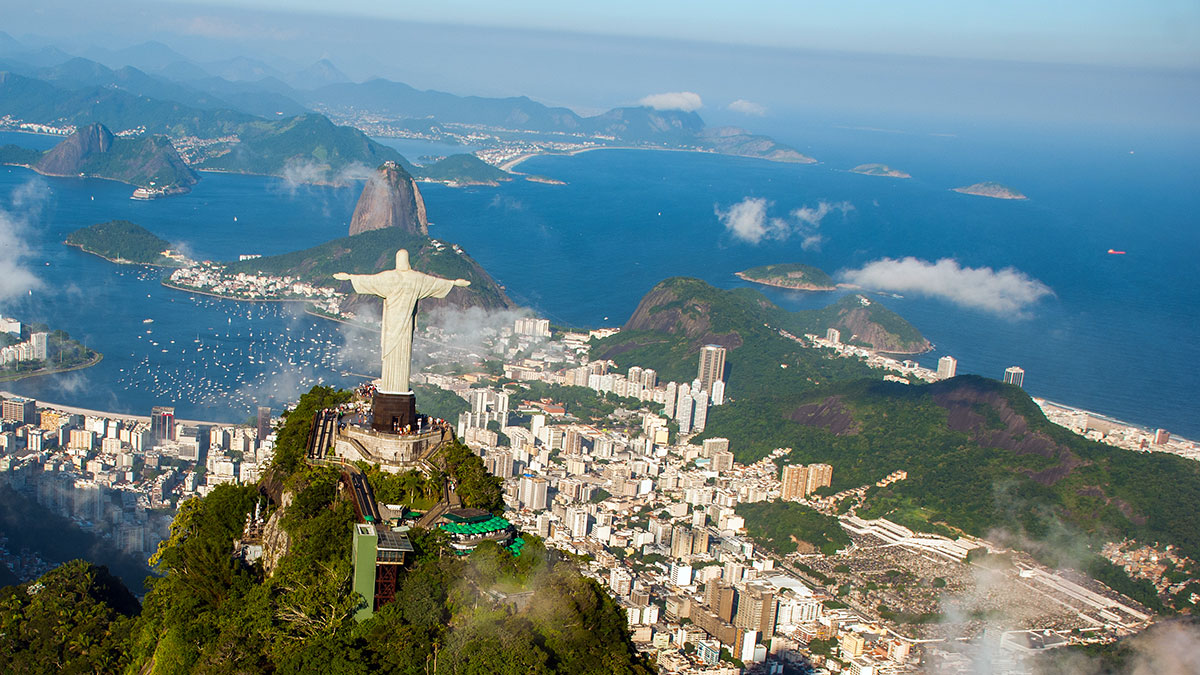 Rio de Janeiro could easily be described as the most beautiful city in South America. Its bays are picturesque, its beaches gleaming white against the lush green backdrop of the Parque Nacional da Tijuca.

A dark-blue lagoon stretches between the ocean and Corcovado, the mountain on which the Christ statue stands. Tropical and marine climates blend seamlessly. Naturally, such a beautiful city also is inhabited by beautiful people who take care of their physical appearance all year round, not just during the carnival.

Although almost 70% of Rio's inhabitants live in poverty, all are proud of being "Cariocas", or residents of Rio, and none of them are prepared to forego the 50 miles of public beach, whether to earn a little money as a street vendor or for rest and relaxation. Cariocas can justly name their city "Cidade maravilhosa": the marvellous city.

European coffee house traditions can be found in the center of tropical Rio! The Confeiteria Colombo is modeled on the Pasteleria Ferrari, an Art Nouveau café in Lisbon which unfortunately burned down in 1988.

The menu lists cakes and salads, but only in Portuguese because few tourists frequent the café. The clientele is mostly made up of workers from the surrounding offices on their lunch break, though a few well-to-do elderly customers give the establishment in the midst of lively Rio a touch of Lisbon's Old World charm.

With only a limited amount of space between the ocean and Corcovado, the center of Rio has been forced to grow vertically. As a result, much of the historic inner city has given way to modern high-rise complexes.

One notable exception is the Convento de Santo Antonio on Largo da Carioca, a spacious square that feels like a clearing in a forest of office skyscrapers. The convent was founded in 1608, but the church wasn't completed until 1780. The crypt contains the bodies of two of the children of the revered Empress Leopoldine, who died in 1826.

The nearly 1.8-mile crescent-shaped strip of sand between Morro do Leme and Forte de Copacabana is neither Rio's longest beach nor its loveliest. And yet the Copacabana is still Rio's tourist center, with countless hotels for all budgets. On hot summer days, thousands of tourists and Cariocas romp in the turquoise water.

After lunch, ever-increasing numbers of locals come down to the beach to engage in sport activities. Bronzed inline skaters and joggers share the footpaths, while others play football and beach volleyball in the adjacent sand. In the evening, the central divider of the four-lane Avenida Atlantica serves as a marketplace for everything from sculptures of Jesus to Rio T-shirts and beach bikinis.

Corcovado rises straight through Botafogo district in the heart of Rio de Janeiro, its peak towering 2,326 ft above the Parque Nacional da Tijuca. Once a large coffee plantation, this spit of mountain is now covered with dense rainforest.

Today the Corcovado serves as the pedestal for the city's hallmark: the 98-foot statue of Christ the Redeemer, which can be reached by a narrow, winding road or the red rack-railway from the Laranjeiras district. From there, several dozen steps lead to the foot of the statue and a phenomenal panoramic view of the city and all the way to the famous Sugar Loaf Mountain. Particularly at night, stop at one of the many vantage points along the narrow park roads, and you'll be rewarded by the view of a seemingly endless sea of lights stretching inland.

This art-historically important church is located directly next to the Convento de Santo Antonio on the busy Largo da Carioca square.

The refined woodcarvings and gold-leaf ornamentation of the richly adorned interior stem from the Portuguese masters Manuel and Xavier de Brito. The ceiling was decorated by Caetano da Costa Coelho. Built in 1739, this is one of the most beautiful examples of late Baroque architecture in Brazil.

If you don't get a chance to visit the Amazon region of northern Brazil, you can still admire the plants of the tropical rainforest in the botanical gardens. The most impressive sight is an avenue lined by 100-foot palm trees.

But don't expect to find brightly-colored trees and flowers, since the Amazonian flora is mainly characterized by shades of green. The Botanical Gardens were established on the Lagoa Rodrigues da Freitas by Joao VI, the Portuguese prince regent, in 1808. Although the gardens became more and more dilapidated during the 19th century, they were renovated completely for the Rio Earth Summit of 1992.

This Benedictine convent and church looks more like a fortified castle than a monastery. That's because it was designed by Francisco de Frias da Mesquita, a military engineer. However, the building he erected directly on the Brazilian coast at the beginning of the 17th century is one of the most important Baroque structures in South America.

The interior of the monastery church is paneled in dark jacaranda wood. The walls of the choir were painted by Cologne-born Frei Ricardo do Pilar (1630-1700). Every morning, the walls echo to Gregorian chants, to which visitors are welcome to listen. Male visitors wearing long trousers may also visit the outer areas of the monastery.

This lovely coastal district was once a Bohemian refuge. Today Santa Teresa is one of the few districts of Rio de Janeiro inhabited by people from all walks of life. However, because the district borders on a sprawling slum (favela), tourists shouldn't go for extensive walks through the streets, especially at night.

Far better to take a "bonde", the last tram service in South America, which the locals lovingly refer to as the "Bondhino", or little train. The bondes leave Rua Prof. Lélio da Gama starting at 5:10 am, cross Arcos da Lapa (the former aqueduct) and creak on up to Santa Teresa. The acrobatic feats of the conductor, who lurches hither and thither as the tram rumbles on its way, are only surpassed by those of the intrepid passengers who hang onto the outside of the car to avoid paying a fare.