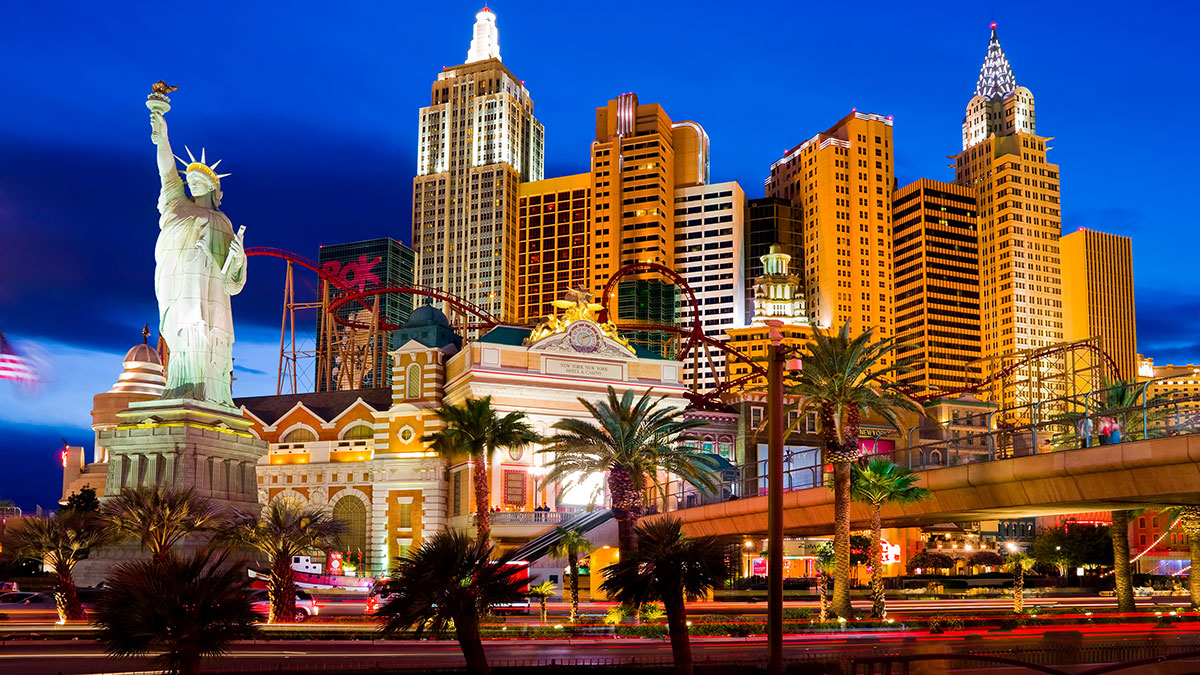 One thing is for sure: if you want to escape the daily grind and are looking for the total illusion, Las Vegas is the right place for you. After becoming known as the desert city of casinos and gambling houses, this city of 500,000 inhabitants is now a unique travel destination.

The city offers fun for the whole family. You can immerse yourself in the neon lights of an adventure park and the shopping malls lining the Las Vegas Boulevard known as The Strip. You can take an excursion to the Roman Empire of Caesar's Palace, ride in a gondola through 20th-century Venice, be amazed at the grandiose sphinx in the Luxor – space and time are completely superfluous terms here.

Had enough of dazzling entertainment? Then take a look at the world of the sea: see the Shark Reef through a glass tunnel in Mandalay Bay or observe playful dolphins in The Mirage. Golfers will find around 50 golf courses with perfect greens in the middle of the desert. Las Vegas records 35 million visitors in approximately 125,000 motel and hotel rooms a year and generates around $7.3 million from casinos. Who could question its attractiveness?

It cost the city of Las Vegas a cherished $70 million to convert the five blocks of Fremont Street into a pedestrian zone and thus to create the largest tourist attraction downtown.

As soon as it gets dark – and this is also the best time to visit – a transparent canopy with over 2 million lights covers the Fremont Street Experience and a 540,000-watt system provides top quality sound and music. A light show takes place on the hour every hour between 7 pm and midnight. Casinos, bars, restaurants and souvenir shops are lined up next to each other, among them the Golden Nugget, with the largest gold nugget ever found. Vegas Vic and Vegas Vicky – two 60-foot high neon figures – wave at the visitors from above. Be warned that if you get carried away watching the show you may forget about your wallet, an opportunity some pickpockets will take advantage of.

The beauty of Venice combined with the adventure of Las Vegas – as boasted by the casino itself, and this description is by no means an exaggeration. The most famous buildings in this city of waterways have been copied to scale and perfectly reconstructed in every detail.

The façade resembles that of a Doge's Palace. Directly next to it is the Campanile in the hot desert sky, and gondolas glide over the canal. The Rialto Bridge is even slightly ahead of the Venetian original: a moving walkway saves you from the walk across. With more than 3,000 suites, no less than 2,200 slot machines, world-class restaurants and exclusive boutiques – the Venetian belongs to a group of top-class hotels. There's only one thing you won't be expecting: pigeons. There used to be 3,000 of them which fluttered around at certain times – unfortunately they did not take to the desert climate.

One of the most popular attractions of this top hotel is an artificial volcano which erupts in front of the building every 15 minutes at night, with fountains of fire shooting up into the sky.

A huge waterfall framed by palm trees and banana plants cascades down into the entrance hall and giant aquariums with colorful fish create a tropical atmosphere. The Mirage promises its visitors relaxation and a change from the norm, with a variety of shows by popular entertainers as well as the Dolphin Habitat exhibit. The dolphins are born in captivity and live in a tank eight times larger than specified by animal protection laws. Guests staying in the hotel are accommodated, with excellent service, in large rooms with a canopy above the bed and marble in the bathroom. The restaurants offer a range of cuisine from Chinese/Asian to Italian and French.

Live like a king – no – like an emperor – the management at Imperial Palace promises its guests. 2,700 opulently furnished rooms, Polynesian pool entertainment with fire eaters and dancers and colorful shows have a hand in this.

The highlight of the evening is the "Legends in Concert" show, in which the stars of yesterday and today such as Elvis Presley, Marilyn Monroe, Judy Garland, Madonna, the Blues Brothers and many more are re-created in astonishingly true-to-life form. Witness a unique collection of classic cars with over 200 exhibits. Absolute highlights of the exhibition are Cadillacs owned by President Franklin D. Roosevelt, gangster boss Al Capone, and music legend Elvis Presley. There is a golf center and a beauty salon next door and, of course, the obligatory wedding chapel.

This luxury hotel offers a taste of the Far East with the motto ‘a healthy spirit in a healthy body'. Here, you can pamper yourself with aromatherapy and massages or wallow in saunas, whirlpools and steam baths. Those who prefer to work up a sweat using other methods can take up the offer of a personal workout program in the gigantic fitness studio.

The family attraction is the Shark Reef, the backdrop to which is an Indian temple immersed in the sea. More than 2,000 examples of 100 types of animals, including 11 species of shark, giant turtles and rays bring you closer to the magic of the deep sea in massive aquariums. Much less dangerous, but equally as attractive and a popular photo subject, are the colorful talking parrots living in the hotel lobby. Outside you will be enticed by huge pool complexes – this time without the animals.

The rooms remain in ostentatious period style, the pool area is a vision of marble and gypsum. The outstanding chef at 'Spago' is Wolfgang Puck, who manages to tempt even fast-food loving vacationers with his excellent cuisine. A tip for the Forum Shops: the Cheesecake Factory hosts forty variations of the famous dessert. Caesar's Magical Empire promises the best entertainment. Accompanied by a Roman legionary, you can visit the catacombs of Caesar's Palace, where you'll be served an excellent meal on a period marble table. Artists and performers entertain the guests and there is a magic show at the end of the evening.

The backdrop for this hotel complex erected in 1996 is, of course, the Statue of Liberty. Brooklyn Bridge leads into the building, where the streets of Greenwich Village invite you for a stroll. Remarkable, even for Las Vegas, is the giant gambling area of the Central Park Casino.

The younger generation will greatly enjoy the roller coaster, which does a double loop high above the Strip and then dashes directly over the hotel's swimming pool. Afterwards, when your stomach has returned to normal, the Gallagher's Steak House, directly imported from Manhattan’s 42nd Street, is worth a visit. The new highlight of the shows is Michael Flatley's intoxicating dance spectacular 'Lord of the Dance'. Finally, have a drink in the Bar at Times Square, where an evening of piano duets will complete a stunning night’s entertainment.

Named after the great Hollywood Studio Metro-Goldwyn-Mayer, the MGM Grand Hotel lives up to its name in every way: shows, events and theater are regularly featured here.

Superstars such as the Rolling Stones, Bette Midler and Phil Collins have already performed in the 17,000-seat super arena, the Grand Garden Area, and Tom Jones and Shirley Bassey have played their parts in the intimate Hollywood Theater. The dancers in the La Femme Theater are imported directly from the Crazy Horse in Paris, and Studio 43 was voted the 'Best Dance Club' in Las Vegas in 2000 and 2001. You will find entertainment for the whole family at MGM Grand Adventures, a theme park of Disneyland style with pirate battles, shows and wild water experiences. Not forgetting the MGM lion: his jaw leads to a large complex of more than 5,000 rooms and suites. Genuine African lions in their natural surroundings are one of the highlights in the Lion Habitat.

The magic of the old Egyptians, with all the amenities of the 21st century, is resurrected in this themed hotel. A mighty sphinx forms the backdrop for this monumental pyramid-like building which was recently named one of the Top 50 Resorts.

It offers visitors 4,408 rooms as well as casinos, restaurants, a fitness area and beauty salon. A huge IMAX cinema screen stretches across 7 floors. The Cairo bazaars inspired the local shopping street, the Giza Galleria. Vases and sculptures from the Middle East are for sale, as well as beauty products. King Tutankhamen's tomb, as found by Howard Carter in 1922, has been reconstructed true to the original. The Egyptian God Ra has given the nightlife its name: the Ra nightclub is one of the trendiest nightclubs in the world – the motto here is to see and be seen.

The Hoover Dam backs up the Colorado River to form the 172-mile long Lake Mead, the largest reservoir in the U.S. The Hoover Dam Museum (Boulder City, 1305 Arizona St., Phone: 702-294-1988) houses all the information on its construction. From U.S. Highway 93, you get a magnificent panoramic view of the glistening green/blue water surface. At the junction with state road 166, you'ill find the park information office for the Lake Mead National Recreation Area, in which 9 marinas offer activities including swimming, water skiing, houseboat tours and cruises (Lake Mead Cruises, Phone: 702-293-6180). Rafting trips, with huge rafts riding down the Colorado River to Lake Mojave 10 miles away, start downstream from the Hoover Dam.