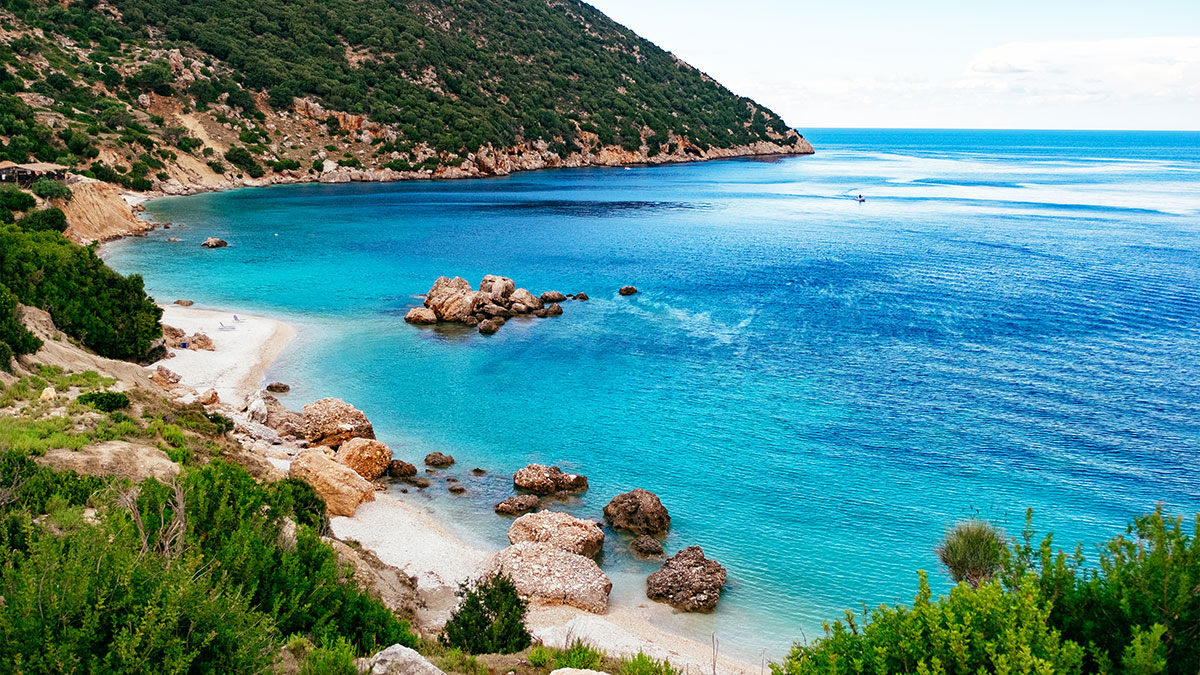 From the air, the Greek Islands appear to be randomly spread out – green smudges in a deep blue sea under an almost endless blue sky.

A visit to the islands always promises a journey through hundreds, if not thousands, of years of ancient history. A friendly atmosphere and even small talk with the locals is guaranteed in the small cafés. Food, culture, and entertainment – you really will find everything dear to the vacationer's heart here.

The party is in full swing on the beaches and in the towns in the larger islands, while those who prefer a quieter life can travel further inland or visit the smaller sister islands of Crete or Corfu. Whether you prefer to enjoy the wide expanse of sea or experience the undulating countryside by hiking over plateaus, through Mediterranean forests and over rocky cliffs – the islands, with lots of light, the fiery sun and endless coastlines under the broad horizon, simply summon up the Mediterranean lifestyle.

"That is Greece! That is classical beauty," Emperor Wilhelm II is supposed to have shouted out when he first laid eyes on Corfu. Indeed, he shortly got to know one of the most beautiful places on the island: his Villa Achillio, bought from the Austrian Empress Sisi. This building still impresses visitors today, boasting a fantastic park with breathtaking views over the island and the surrounding sea. The small chapel and the numerous paintings and sculptures as well as the small collection of personal items from the famous blue-blooded villa inhabitants are of great interest.

Otherwise, Corfu gleams with superlatives in the sun together with its capital city of the same name: the greenest Ionian Island, the most visited Greek Island, the most beautiful city in Greece, the city between two fortresses with impressive architecture and many bright flower gardens, and the first Greek Island to be opened up for tourism. It is this exemplary infrastructure which the tourists admire and enjoy. 3000-foot high Mt. Pantokrator (with its unbelievable panorama), olive tree forests and gold sandy beaches round off this image of perfect beauty.

Crete has a deep secret – everyone who sets foot on this island feels the exact same power flowing through their veins and their soul expanding, wrote Nikos Kasanzákis, author of Alexis Sorbas, about his home island. The enormous variety offered by the island can also raise such euphoria in visitors. Whether it's the wildly romantic valleys or the sparse countryside, the earthy mountain landscapes or stylistic beach life, the peace inland or the pulsating ports, everyone can spend their dream holiday here.

One of the most famous highlights is the Samaria Gorge. Walkers can experience a wonderfully impressive natural paradise here in the largest gorge in Europe. Those wishing to escape the mainstream of visitors can scramble through the insider’s tip – the Agia Irini Gorge. Evidence of the Minoan culture is also not to be missed: the restored Knossos Palace (dating from around 2000 – 1400 B.C.) and the authentic Festos Ruins, which also guarantee a breathtaking view of the Messara plain. And those who have not had enough of history can visit the sensational Archaeological Museum at Heraklion.

Unique to the third largest Greek Island is the stone forest in which you will be amazed by the stone redwood trees from the Palaeozoic era, standing next to large quantities of blooming wild flowers and just as many colorful butterflies. The ferries come into the capital of Mitilini, once occupied by the Turks. A street bazaar and the Yeni-Cami mosque (today an exhibition hall) are present-day reminders of this.

In the suburb of Varia, you can admire the paintings of the island painter of the same name in the Theofilos Museum. Light red roofs can be found all over the island, but are particularly beautiful in Mithimna (also known as Molyvos), a picturesque place nested around the summit of a fortress built on a hilltop. The houses nestle right on the slope and a stroll down the narrow streets entwined with vines is fantastic. There are also things to do around Mount Olympus: in Plomari you can visit the ouzo distillery, and the mountain village of Agiasos is a romantic pearl on the north slope. Obviously, you can also walk up the mountain on foot.

Rhodes likes to call itself the Sun Island – and quite rightly so. The light-colored beaches that reflect double the light have contributed to this image. However, the towns also have a lot to offer – first and foremost the historical center of Rhodes city, with its quirky alleys and pretty courtyards.

The sights in Rhodes city worth seeing also include the Archaeological Museum with its outstanding collection and the aquarium, set in a realistic cave, in which you can discover giant turtles and rays while walking alongside the colorful underwater world. For families, the large water park with four different levels of difficulty is an experience every time. The most beautiful beaches lie on the east coast, where the legendary Faliraki is the most popular. Another city highlight is the ancient Lindos: in the narrow, pedestrian streets with low-rise houses you will feel transported to ancient times – the more so with the grand Acropolis looming over the entire city. A trip to the magical Butterfly Valley (Petaloudes) occupied by thousands of harlequin butterflies, is truly exciting.

The most eastern of the Aegean Islands, known by many only for its sweet wine, has much to offer vacationers. In the capital city of the same name, you should visit the old town district and the Archaeological Museum. With its blue-cliffed bays, the former fishing village of Kokkari attracts hoards of bathers in the summer.

Cultural zeal is demonstrated by the port of Pithagorion, which was named after the philosopher Pythagoras, who was born there. The tunnel of Eupalinos, an underground water channel constructed in the 6th century B.C., is particularly impressive. Nearby, at the mouth of the river Imbrasos, you will find the ruins of a Hera temple (Heraion).

The crescent-shaped Cyclades Island is said to have watched over the secret of Atlantis for thousands of years. And those who have read the famous epic by Jules Verne, 20,000 Leagues Under the Sea, will recognize his descriptions of Santorini. The history of the island, with its villas built perilously on the cliff tops and its wonderful breathtaking views at every corner, dates back to the Bronze Age.

Early settlement ruins such as the large Thera ruins and the port of Akrotiri testify to this. Similar to the doomed city of Pompeii, Akrotiri was buried under ash and lava during a volcanic eruption in 1628 B.C. The excavations are still preserved today. Using the latest technology, a futuristic-looking roof construction protects the perfect wall paintings and the architecture of the old town from environmental influences. Other highlights include a boat trip to swim in hot springs, the volcanic island of Nea Kameni and a visit to the Vothonas church which is built in a cave. Swimmers can also choose between red, black or white sandy beaches.

All year round, a number of Greek and foreign tourists are infatuated by the charm of this pre-Christian trade and harbor town, the capital city with the same name as the island. The four-mile long sandy beaches of Meropis, Lambi, Agios and Fokas on both sides of the city center attract sun-seeking vacationers for swimming and sunbathing. Restaurants and hotels are lined up next to each other here, and it gets very busy on the beach at peak season.

Travelers looking for a relaxing spa should not miss the Empros thermal baths, some 6 miles away. Those who would rather avoid the water can simply take a long leisurely stroll through the city. The best starting point for this is the quirky Mandraki harbor. Visit the castle of the Knights of St. John, the Hippocrates Plane Tree, the Agora, the Archaeological Museum with its Roman and Hellenistic sculptures, and the colorful market. Complete your trip with a visit to one of the lovely cafés in the historical heart of the city.

St. John is said to have once experienced the vision of the apocalypse and written it down on this island. And so the St. John Monastery, built in the style of a fortress in his honor, sits overlooking the picturesque Chora with its white, nested houses and the quirky harbor town of Skala. On the way to the Monastery you should definitely visit the Cave of Apocalypse where the Apostle heard God's voice. Make sure that you dress appropriately - knees and shoulders should be covered. The former strictness of ruling by the monks can still be felt today.

When the day trippers have left the island, you will be able to create your very own entertainment. The nightlife is very quiet, even in Skala which is packed during the day. Swimming off Patmos is excellent. The popular Bay of Meli can be reached from Skala by foot or by a small water taxi to the wide and beautiful beach of Psili Ammos.