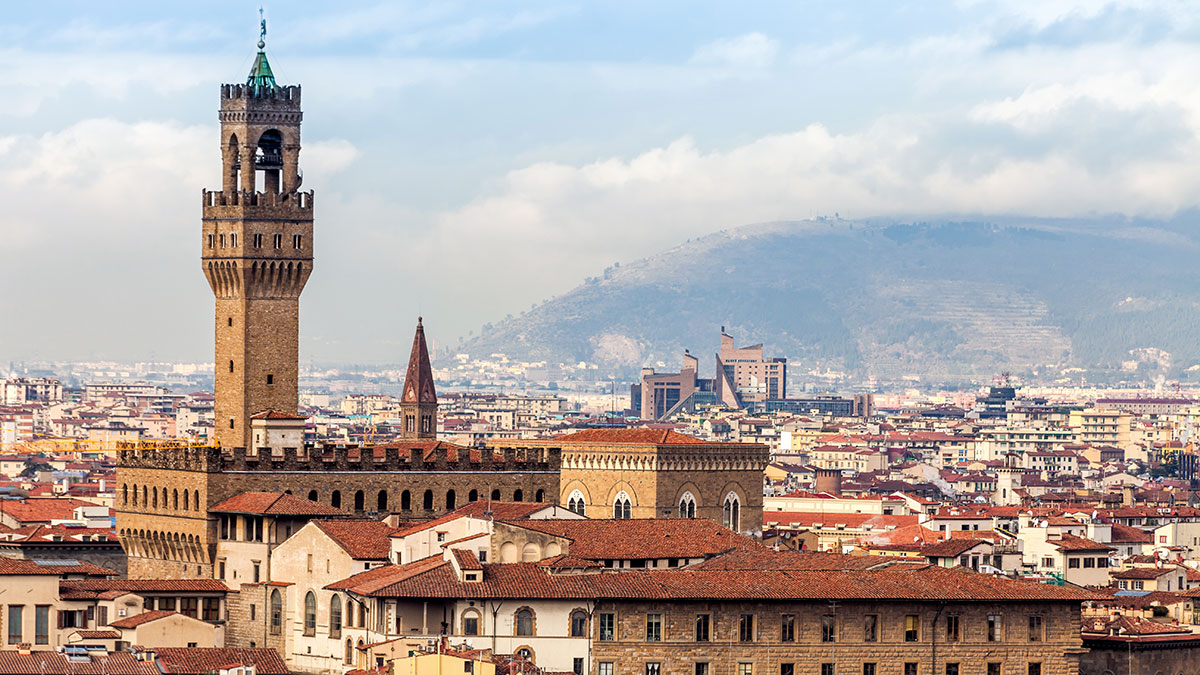 If you stand in the center of the Tuscan capital and turn full circle, you will see at least a dozen unique historical structures. Nowhere else in the world is there such a concentration of Renaissance art and architecture. In addition to Santa Maria del Fiore Cathedral, with its richly ornamented façade, the Uffizi has one of the most important collections of paintings in the world. And on every street and around every corner there are noble patrician palaces with inner courtyards, pergolas and fountains.

Of course, the city of the Medicis offers much more to do than simply take in all the art. In the Via de Tornabuoni, there is one fashionable boutique after another, and the Ponte Vecchio is not the only place where you can buy beautiful gold and silver jewelry. The traditional Florentine cuisine also has a very good reputation and you can try the different dishes in any number of very good restaurants. In the evenings, young Florentines in particular like going out for a beer. In summer, they go for music, dancing and open-air cinema.

The Baptistery (Battistero) could easily be mistaken for an ancient building. Its architecture employs classical lines, even though the baptismal church was built in the 11th and 12th centuries. The clear lines in white and green marble which shape the façade of the octagonal building incorporate arches and ledges. The three huge bronze doors are a real highlight. The south door, which was designed by Andrea Pisano, shows scenes from the life of John the Baptist, the patron saint of Florence.

Lorenzo Ghiberti took 27 years to finish the east portal, known as the "Gateway to Paradise", which depicts stories from the Old Testament against a background of sculpted natural and architectural landscapes. The northern portal is also by Ghiberti. The interior of the Baptistery was decorated by Venetian masters in the 13th and 14th centuries using splendid, somewhat oriental-looking mosaics.

The Bargello dates back to the 13th century, and was originally the seat of the municipal government before being used as a courthouse and prison during the Medici era. It was not until 1859 that the palace was converted to its present function as a museum containing, among other treasures, one of the most important collections of Renaissance sculpture anywhere in the world. Naturally, its splendid halls contain works by Michelangelo, but also include pieces by Donatello, Cellini, Giambologna and Verrocchio.

Donatello's bronze 'David' shows a surprising new awareness of physicality and motion. His protégé, Desiderio da Settignano, created two of the most expressive busts of his day: the 'Youth' and the 'Noblewoman'. In addition to Renaissance sculpture, the museum also exhibits Islamic art, a collection of medals, and works made of ivory, glass and porcelain.

At the time of its completion in the mid-15th century, the 500-foot long and 125-foot wide cathedral was the largest church in Europe and one of the most expensive buildings in the world. Work began in 1296. In 1420, when Filippo Brunelleschi solved the problem of constructing a dome 137 feet in diameter by creating a self-supporting shell, many doubted that his bold idea would hold up in the long term.

More than five centuries later, you can still enjoy views of the city from the lantern at the top of the 25,000 ton, 295-foot high dome that has become the hallmark of Florence. At 276 feet, Giotto's Campanile (bell tower) is slightly smaller. Its marble façade was decisive in determining the cathedral's own façade, which was added in the 19th century. While the exterior is richly ornamented, the interior appears far simpler, making the frescoes of the 'The Last Judgement' – painted in the dome by Vasari and Zuccari in the 16th century – all the more impressive.

The Pitti family, rivals of the Medici family, built the Palazzo in the 15th century. However, 100 years later they had to sell it to the Medicis, who expanded it into the grandest, most luxurious palace in the city, 672 feet long and 124 feet tall. After the Medicis, it was inhabited first by the dukes of Lorraine and later the Italian kings. Today, the Palazzo Pitti houses one of the most important museums in Florence, incorporating a number of different exhibition areas.

The Palatine Gallery is one of the best, both for its richly decorated Baroque halls and the unique collection of art by Raphael and Titian, as well as works by Tintoretto, Georgione, Rubens and Van Dyke. The Gallery of Modern Art exhibits 19th-century paintings, while the Museo degli Argenti features fine jewelry and gemstones. The Boboli Gardens, which stretch up the hill behind the palace, are considered one of the most beautiful Renaissance parks in Italy.

This grandiose square, formerly the scene of public meetings, is dominated by the massive tower of the Palazzo Vecchio, still the seat of the municipal authorities. The Piazza is best savored from one of the fine street cafés opposite the Palazzo. An open, three-arched hall built at the end of the 14th century can be found on the right in front of the Palazzo the Loggia dei Lanzi. This representative building, the architectural model for the Feldherrenhalle in Munich, is used for rallies and receptions and houses famous sculptures such as 'Perseus With the Head of the Medusa' by Benvenuto Cellini. The marble 'Rape of the Sabine Women' statue (1583) by Giambologna is situated under the right-hand arcade.

Fountains and famous statues grace the Piazza. In front of the Palazzo is a copy of Michelangelo's 'David' (the original is in the Galleria dell'Accademia) and a re-cast of 'Judith and Holofernes' by Donatello. Having freed their country by committing a murder, Judith and David symbolize republican liberty. The Neptune fountain and the equestrian statue of Cosimo I were added by the Medici dukes in the 16th century.

Florence is surrounded by hills, and therefore particularly picturesque when seen from above. The Piazzale Michelangelo on the opposite side of the Arno provides an ideal viewing gallery. There is a bus service, but it would be a shame to miss out on a wonderful walk along Via San Niccolò, with its medieval houses, and the Piazza Giuseppe Poggi, which is dominated by the impressive San Niccolò gate, dating back to the 14th century.

A copy of Michelangelo's famous sculpture of David can be seen on the square bearing the great master's name. A sea of Florentine buildings stretches out in front of you. Sightseers can enjoy the view over a cup of coffee or visit one of the churches on the hill: San Salvatore and San Miniato al Monte.

The Ponte Vecchio connects the city center to the districts of Santo Spirito and San Frediano. It has spanned the Arno river since 1345, making it the oldest bridge in Florence – the only one to survive from the Middle Ages. To offset the high construction costs, small houses were built on the bridge, which were then rented out as shops. In 1593, Archduke Ferdinand I decreed that only goldsmiths and silversmiths were allowed to ply their wares on the bridge. Gems and jewelry are still the only thing you can buy on the bridge, and visitors are dazzled from all sides by glittering gemstones.

The Ponte Vecchio is closed to cars, so it is a wonderful place for a romantic walk in the evening as the sun sets over the river. The city's other bridges over the Arno were destroyed in World War II, though attempts were made to restore them to their original form, partly by using original stones fished out of the river.

A visit to Florence generally means focusing on art and architecture. In the midst of such municipal magnificence, however, other more mundane needs can be satisfied in a very pleasant way and in a stylish ambience. If you like your food and drink, don't miss out on the Mercato Centrale (central market), which is a real feast for the senses.

The beautiful covered market, spread over two stories and the largest of its kind in Europe, offers Lucullan delights from the different regions of Italy, above all Tuscany. Here, you will find everything you need for a picnic, or a tasty little present. Knowledgeable traders at stands overflowing with meat and fish, fruit and vegetables, pasta and olive oil advise their customers and sell delicious salami and Parmesan, for example, in any desired amount. In summer, there is also a street market every day in front of San Lorenzo (in winter Tue-Sat only), where you can get bargain jeans, T-shirts, bags and trendy fashions.

A 13th-century Dominican church closes off the wide Piazza Santa Maria Novella to the north, where it borders on the Piazza della Stazione (central station). With its attractive Renaissance façade, almost 330 foot-long three-nave interior and Gothic cross-groin vault, it is one of the main churches in Florence. The triangular gable and the volutes in the upper story served as models for many Renaissance and Baroque façades.

The church is splendidly appointed, a real treasure trove of Florentine art. Wealthy merchants commissioned the best artists of the day to build them family chapels and magnificent frescoes in the hope that this would increase their prestige and guarantee their soul's salvation. The fresco of the Holy Trinity by Masaccio in the left nave – the first painting employing a central perspective – is outstanding. Numerous Renaissance artworks can be found in the sacristy, chapels and former monastery buildings.

The Uffizi was built next to the Palazzo Vecchio under Duke Cosimo I between 1559 and 1580 for use as a suite of offices for the Tuscan regional government. Cosimo's successor began exhibiting his art collection in the palace. The world famous collection of paintings in the former administrative rooms comprises some 2,000 works of art spread across 45 rooms, primarily European paintings from the 13th to the 18th centuries.

The exhibits are arranged in chronological order, starting with well-known Tuscan artists, such as Cimabue, Giotto, Duccio, Botticelli, Leonardo da Vinci and Michelangelo, moving on to important Italian masters such as Raphael, Bellini and Titian, and ending with Germans such as Dürer and Cranach and Dutch artists, such as Rubens and Rembrandt. The most famous works in the Uffizi include 'Spring' and the 'Birth of Venus' by Botticelli, and the classical 'Medici Venus', which dates back to the 1st century A.D. To avoid getting overwhelmed by the sheer volume of artwork, it is a good idea to work out exactly what you want to see before going in. The Uffizi café is a good place to recover afterwards.