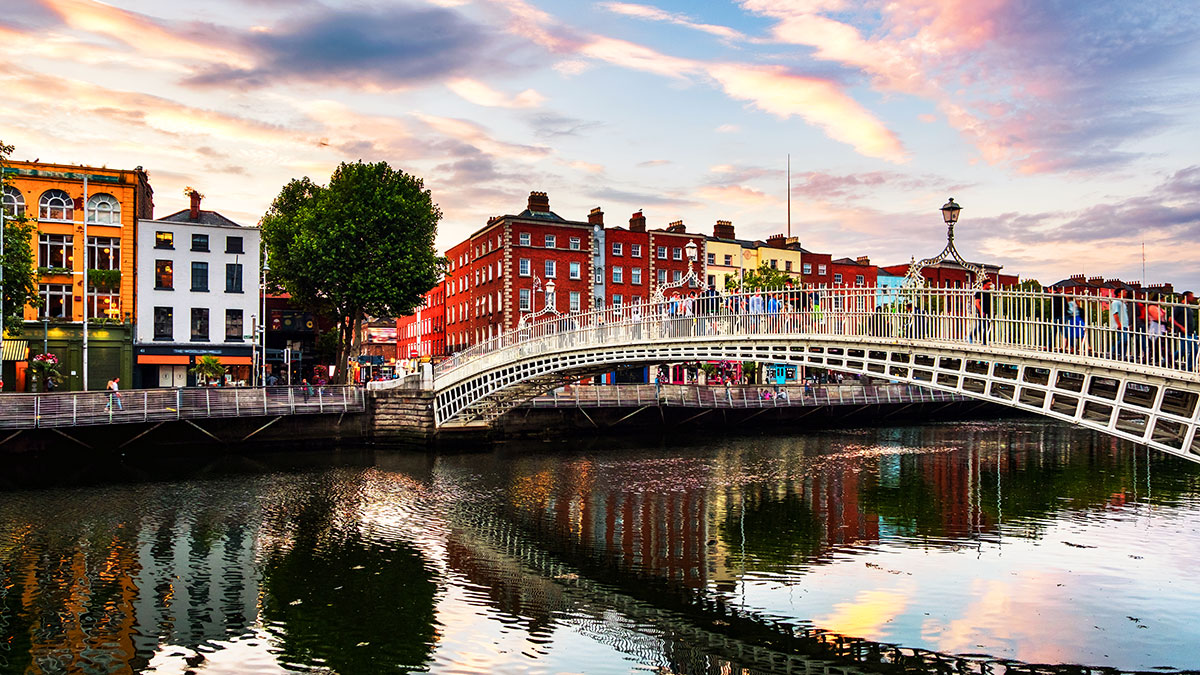 The Irish capital, with its approximately half a million inhabitants, beguiles with its charm, culture and a unique setting. Nestled in magnificent, unspoiled scenery and surrounded by hills, the city is only a stone's throw away from wild coastline and the untamed sea, a combination few other cities can match.

In recent decades, the city has also enjoyed some of the pleasant effects of Ireland's economic boom. For example, Dublin's buildings have been given a thorough facelift, museums and galleries have been spruced up and trendy quarters such as Temple Bar have grown up. These improvements may be the reason many visitors find the atmosphere in the city so friendly and relaxed. Its estimated 1,000 pubs, most of which sell dark, creamy Guinness, may also have something to do with it. The headquarters of the Guinness brewery is also in Dublin.

Numerous open-air events add to the party mood in the city, be it concerts by Ireland's rock music greats - U2, Bob Geldof and the Dubliners – or the St. Patrick's Day celebrations. Grafton Street, one of the world's most beautiful pedestrian precincts, is a hive of activity seven days a week. Those preferring a walk down memory lane have only to visit one of Dublin's numerous museums or interesting libraries. The James Joyce Museum, dedicated to the national hero and author of Ulysses, is an interesting mixture of the two.

This former medieval castle dates back to the 13th century and was a symbol of English rule in Ireland for hundreds of years. After fires in the 17th century, the imposing building was redesigned in a mixture of Georgian, Classical and Neo-Gothic styles and thus lost some of its castle character. However, the Record Tower, dating from Norman times, and the State Apartments are still well worth a visit. Both complexes are surrounded by the remnants of the original castle walls and may be visited as part of a guided tour.

The most impressive part of the State Apartments is St. Patrick's Hall. This high, richly ornamented room is considered the most important hall in Ireland and has been used for the inauguration of the Irish president since 1938. The Throne Room, with its 200 year-old throne, and the royal chambers exude aristocratic flair. The interior of the Chapel Royal, made entirely of oak, is as interesting as the exterior, which is decorated with more than a hundred limestone busts of famous Irishmen. The Dubh Linn Gardens in the center of the castle are a good place to stop and relax before going on to the Chester Beatty Library, voted European Museum of the Year for 2002. It contains some 22,000 manuscripts, rare books, prints and miniatures from Western, Middle Eastern and Asian cultures.

Merrion Square, Dublin's second largest, is considered one of the most attractive squares in Ireland. Built in 1762 and a public park since 1974, the center is surrounded by beautiful Georgian houses from the 18th century. These mostly four-story brick houses, some of which are listed buildings, look rather plain from the outside. You have to go inside to see their true splendor.

Originally earmarked as a site for a cathedral, Merrion Square North is particularly rich in architectural sights. One of these is the monument dedicated to the writer Oscar Wilde (1854-1900), who lived at 1 Merrion Square and who is now immortalized in stone. Beside it is a monument to another no-less-famous man. The 'Tribute Head' was dedicated in 1975 to the then-imprisoned Nelson Mandela, who later became the president of South Africa. One of the city's most photographed sites is without a doubt the Classical-style Church of St. Stephen's. Dubbed the 'Salt Cellar' by locals, it completes beautiful Georgian Upper Mount Street on the south side of the square. This peaceful and distinguished ambience is also reflected in Merrion Square West, where artists present their works. The National Gallery of Ireland is also located there.

The National Gallery of Ireland on Merrion Square West, which opened in 1864, is an absolute must for art lovers. The gallery has been extended many times and focuses on paintings from the 14th to the 20th century. It is divided into three main sections: the North, Milltown and Dargan Wings.

It is best to begin your guided tour in Milltown Wing, which houses the works of Irish artists. This leads on to Dargan Wing, which concentrates on the Yeats family. The exhibits there are dedicated to Jack B. Yeats, brother of the famous writer W. B. Yeats. Arguably the most exciting room is on the ground floor of the North Wing, which contains famous portraits of James Joyce and Sean O'Casey. In the same wing there are also exhibits by English artists, as well as German, Dutch and Flemish masters. The Spanish collection is particularly beautiful, and includes works by El Greco, Goya, Murillo and Picasso. The tour is rounded off by returning to Milltown Wing to see Italian masters like Titian and Tintoretto. The crowing glory is without a doubt 'The Taking of Christ' by Caravaggio, which lay undiscovered for more than 60 years.

National Museum of Archaeology and History

The decision to store all the country's most important works of art at a central location was a stroke of luck for Dublin visitors interested in culture. The museum is the place to go if you want to see valuable exhibits from Ireland's past. The most precious ones from early history are the 8th century Ardagh Chalice and Tara Brooch. The latter is on display on a reflective surface so that viewers can interpret the ornamentation better.

The Shrine of St. Patrick and the Clonmacnoise Crook from the 11th century are just as valuable, if not as old. The special exhibitions on the Viking Age in Ireland and on the struggle for independence are fascinating. The 'Road to Independence' exhibition impressively documents the latter. Another highlight is the 'Or´- Ireland's Gold' exhibition, an impressive historical archive featuring the art of the goldsmith in the Bronze Age. There are also some exhibits dating back to the Iron Age, while the Derrynaflan Hoard illustrates that there are still treasures buried in the soil of Ireland. The silver treasure trove was only discovered by amateur treasure hunters in County Tipperary in 1980 and is thus one of the few more recent finds in the museum. Jewelry exhibitions and zoological collections in the Irish Room offer exciting alternatives for art and animal lovers.

Trinity College has counted such famous people as Samuel Beckett and Oscar Wilde among its illustrious graduates since 1903. Tourists should not hesitate to visit the university's campus, home to around 6,000 students. The reason: the Old Library. This distinguished library was completed in 1732 and houses a magnificent collection of more than three million books and 5,000 manuscripts.

The most famous item in the collection is the Book of Kells, an 8th-century Latin manuscript. Many people consider it the most beautiful book in the world. The most magnificent of its calfskin pages are on display in a showcase. Explanatory notes and enlarged views make it easier for visitors to understand this intricate masterpiece. The same era also produced other important works such as the Book of Durrow, the Book of Dimma and the Book of Armagh. The 200-foot long Long Room has more valuable books and first editions and makes a fitting finale to the literary walkaround.

The spacious Phoenix Park lies somewhat outside the city center, not far from Heuston Station. Covering an area of 1,758 acres and surrounded by a wall 7 miles in circumference, it is the largest enclosed urban park in Europe. Laid out as a royal deer park in 1662, it was opened to the public in 1745 and declared a national historic park in 1886.

Right at the main entrance, the visitor encounters the People's Flower Gardens and the famous Dublin Zoo, one of the oldest zoological gardens in the world. In the summer months, music lovers can enjoy concerts on the open-air stage next to it. One high point in the true sense of the word is the 200-foot Wellington Monument, the largest obelisk in Europe, which is dedicated to the Duke of Wellington, who defeated Napoleon at the Battle of Waterloo. On the other hand, the modern Phoenix Visitors' Center is dedicated to latter-day visitors. It provides information in the form of exhibitions and films. The most historical building in the park is the palace-like Áras an Uachtaráin, today the residence of the Irish president and formerly – as Viceregal Lodge – the residence of the British Viceroys. Tourists are impressed by the reception rooms dating from the 18th and 19th centuries. Incidentally, one man spent his entire youth here in the Little Lodge, probably little suspecting that he would eventually become one of the most famous Englishmen in history. His name: Winston Churchill..

The 300-foot tall St. Patrick's Cathedral is not only Ireland's biggest church, but also one of its most interesting. Founded in the year 1192 and completed in the Gothic style in the 13th century, it belongs to the Protestant Church of Ireland. The cathedral was built at the confluence of the rivers Liffey and Poddle, as many people are said to have been baptized here by St. Patrick. Jonathan Swift (1667-1745) is granted nearly the same holy status. As dean of the cathedral for 35 years, he was largely responsible for determining the fortunes of the church, though he also dedicated himself to helping the then oppressed Catholic population.

Swift, who also became famous as the author of the satirical novel Gulliver's Travels, is still present. His tomb can be found at the entrance to the cathedral, where he is also portrayed on a wall plaque exhorting visitors to act justly. Other tombs and graves serve as reminders of British colonial rule, with artifacts from China, India, Afghanistan, South Africa and Burma. Collections are still taken in a curious manner at St. Patrick's Cathedral: In honor of Sir Benjamin Lee Guinness, who once funded a complete renovation of the church, worshippers still throw their coins and banknotes not into small baskets, as is customary elsewhere, but into Guinness barrels.

In the 1990s, the Temple Bar area on the south side of the Liffey developed into Dublin's most popular art, cultural and entertainment quarter. Countless bars, shops and restaurants have since been the order of the day in its narrow streets. The district is a trendy meeting place for young people, who gather to enjoy the performances of the street artists and musicians. But Temple Bar is not only home to the alternative scene. High-class restaurants, upscale bars and art galleries have long established themselves in these former docklands.

In actual fact, something quite different was originally planned for the area a few decades ago; namely the demolition of complete blocks of houses and the construction of a central bus station. Luckily, these plans were halted by the students and (survival) artists who were living in the buildings. In the 1980s, the first pubs, galleries, studios and restaurants opened, and the almost legendary reputation of the quarter was born. At the beginning of the 1990s, millions of Irish pounds of EU development aid were pumped into the former rundown district. A series of cultural attractions sprung up, in addition to the numerous shopping and entertainment options. Meeting Horse Square, for example, is a cultural center for exhibitions and all kinds of open-air events. It also houses the Irish Film Center and the Gallery of Photography as well as the children's cultural center, The Ark..