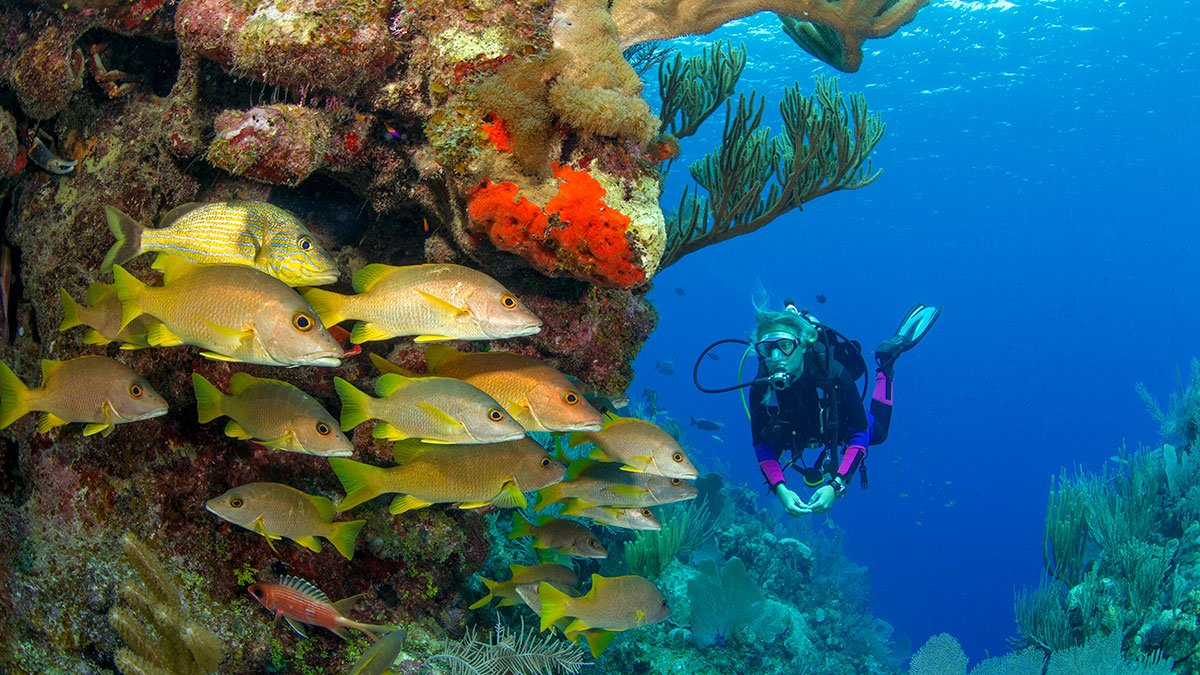 The Cayman Islands are situated in the middle of the Caribbean Sea, 125 miles from Cuba and 180 miles northwest of Jamaica. Around 31,000 inhabitants live on the island trio made up of the largest island, Grand Cayman, and the smaller Little Cayman and Cayman Brac. The Caymans are a tax paradise with a booming banking industry. For this reason, but also due to international tourism, the islands are extremely affluent. The prices are therefore much higher than average and vacationing here is anything but a bargain.

In return, the entirely English-speaking Caymans are extremely clean, well-kept and, above all, safe. No other Caribbean State has such a low crime rate and boasts such a high level of education. Other reasons for their popularity are not the land, but can be found in and on the azure sea.

On Grand Cayman, the largest and most lively island, attractive light-colored sandy beaches such as the famous Seven Mile Beach await you and many underwater activity experts refer to it as the most beautiful diving area in the world. This diving El Dorado is completed by the “treasure island” of Cayman Brac and Little Cayman with one of the most famous reefs in the world: the Bloody Bay Wall.

Little Cayman is situated 6 miles east of Cayman Brac. Encompassing 14 square miles and 100 inhabitants, the island is truly small and the land has little appeal – namely peace and quiet and iguanas. However, the underwater activities are quite spectacular. The Bloody Bay Wall is one of, if not the, most beautiful reefs in the world.

By boat you are straight into the open sea and right into the midst of every diver's dream. Deeper than anywhere else in the Caribbean, the reef has a 1.5-mile vertical drop. On the 'mother of all steep faces', divers glide past corals and pass along the reef wall through shoals of fish. Tuna fish, wahoo and mahi mahi dart across the breathtaking reef. Lobsters, bermudas and morays can be easily recognized, even more so because the water here is clearer than nearly anywhere else. Visibility is up to 150 feet and gives you the feeling of unlimited freedom and weightlessness.

Cayman Brac lies 86 miles northeast of Grand Cayman and covers 16 square miles. The few inhabitants, estimated at 1,500, used to be involved in trade with coconut production but today they live off tourism. The small island is quiet and contemplative, since most visitors entertain themselves under the water: Cayman Brac is a real diver’s paradise.

Underwater caves, rock faces, reefs, sunken shipwrecks – there are plenty of them all! Some of these ships were even deliberately sunk, such as the Captain Tibet, a Russian destroyer, on which an artificial reef is to be formed in 10 to 20 years time. The diving area with its steep, plunging, several thousand metres of rock face is extremely challenging and is mainly suitable for those experienced in underwater activities. Legend has it that Cayman Brac was featured on the original cover of Stevenson's famous novel Treasure Island. There are therefore still quite a few people even today who dive deeper and deeper in the dream of discovering the legendary treasure of the sea. Those preferring to stay on land should try hiking and climbing tours over the Bluff, a coral cliff protruding 130 feet out of the sea in the east of the island.

The Cayman Maritime and Treasure Museum near George Town explains the development of the island between 1503 and the present day. Of course, Christopher Columbus, who discovered the island, also plays a large role. It was him who first gave the island the name Las Tortugas. This is because the sea around the islands was full of sea turtles. It was not until later that Tortugas became the Cayman Islands.

The islands had to endure centuries of heavy attacks from pirates. The Maritime and Treasure Museum makes particular reference to these wild years. Drawings, cards and small animations provide a good insight into the dangerous seafaring past. An electronic pirate named Blackbeard gives additional information about the turbulent past of the Caymans. Blackbeard survived here not without reason. Like true pirates, he and his prominent colleagues such as Henry Moore & Co. gladly used the countless caves and crannies of the island for themselves and their treasure, mainly gold and silver pieces from Spanish galleys, which you can still marvel at today in the museum. The museum’s treasure hunt, in which children are transformed into a wild horde of pirates, will amuse and excite the little ones.

Cayman’s Queen Elizabeth II Botanic Park is at Cayman Palms. All the plants are labeled in detail so that you can quickly get a good overview of the flora on the islands. The park in the north of Grand Cayman was opened by Queen Elizabeth II in 1994. New attractions were added in 1997 with the Visitors Center, the Floral Garden and the Heritage Garden.

The first part of the tour is the Visitors Center, which is designed to give you a feel for the Caribbean way of life and architecture. Fitted with wooden windows, a waterfall and a large terrace, exhibitions are often held in this building. The Heritage Garden brings the past of the Caymans to life, and the main attraction is a restored house from the early 20th century. Visitors then enter the third and most important part of the tour – the Floral Garden. Several hundred tropical and subtropical plant species create a multi-colored mosaic. At the end of the tour, a lake landscape awaits you with several small islands. Here, many different types of birds find their ideal habitat.

George Town is in the southwest of Grand Cayman – a small lively town with around 15,000 inhabitants. The image of the town is determined by a mixture of wooden houses and new concrete complexes. The latter house, among other things, the town's numerous banks. In George Town, the offshore banking industry and services are all concentrated around money.

However, you will encounter not only neatly dressed bankers in the capital of the Caymans. Tourists saunter through the spotlessly clean streets and lively alleyways alongside financial experts. Visitors can search for souvenirs and regional specialities, for holiday items and beach accessories in the numerous shops. The inhabitants of George Town exude the Caribbean joie de vivre in their everyday life and in particular in the two main festivals of the year. The Botabano carnival in April is so well celebrated that it has even gained respect from Brazil's carnival-goers. And this respect then might turn into fear during Pirate Week in October when George Town appears, as in earlier times, to still be in the hands of dangerous pirates.

Pedro’s Castle is the oldest building on the island, and legend has it that it was constructed in 1635. Other theories claim that the building was erected by an Englishman in 1780. Either way, this national symbol was named after the settler and, allegedly, the first constructor, Pedro Gomez. The castle was designed to protect the residents from fearsome pirate attacks.

Furthermore, the building is considered the birthplace of democracy on the islands. It was here in 1831 that the decision was made to vote for elected representatives. Many years later it became known for the abolishment of slavery. After two fires, the government restored the complex in its original style. Behind a stone wall you will find a large building from the early 19th century. Small pineapple and banana plantations can also be found here. The site is surrounded by tropical plants, and exotic palm trees border the paths. A new feature is the Multimedia Theater, in which a 20-minute film on the history of the castle is shown, together with light and sound effects.

In the west of Grand Cayman island, you'll find the Seven Mile Beach, a stunningly beautiful sandy beach which, despite its name, covers only some 6.2 miles. It is, however, one of the most attractive beaches in the Caribbean. In addition to the numerous hotels, apartment blocks, B&Bs, bungalow complexes and villas, you will also find the ornate home of the island governor. Furthermore, all hotel buildings undergo strict controls and must on the whole blend into the landscape.

Seven Mile Beach is the largest holiday resort in the Cayman Islands and is directly north of the capital George Town and south of the second largest city on the island, West Bay. Not only beach lovers are drawn here, but also water sports experts and snorklers, who can experience the warm and relatively meek water worlds via the offshore reef. The reef itself is also very popular with divers. A highlight since the beginning of the 1980s has been the wreck of the Oro Verde cargo ship, which is suitable for extensive afternoon or night diving.

In earlier times, fishermen found the land too hot so they used to gut their catch at sea - always in the same place, which was not without consequences. The stingrays loved the leftovers and returned again and again until eventually they did not go away. This was more or less the time that Stingray City was born.

Stingray City is now an extremely popular place with divers and snorklers. Here in North Sound, west of Cayman Kat, you can swim with the animals and even get close to them. Those daring enough even feed the giant rays. Since the animals are used to people they are tame and very trusting - so much so that they bump into, push and press against divers in order to get their edible gifts. Here, underwater experts have nothing to fear, but you should make sure that you do not step on one of the well-disguised stingrays that often float just above the sea floor. Then their tail shoots up in a knee-jerk reaction and can result in a very painful sting.