Cape Town - The Most Beautiful City in the World 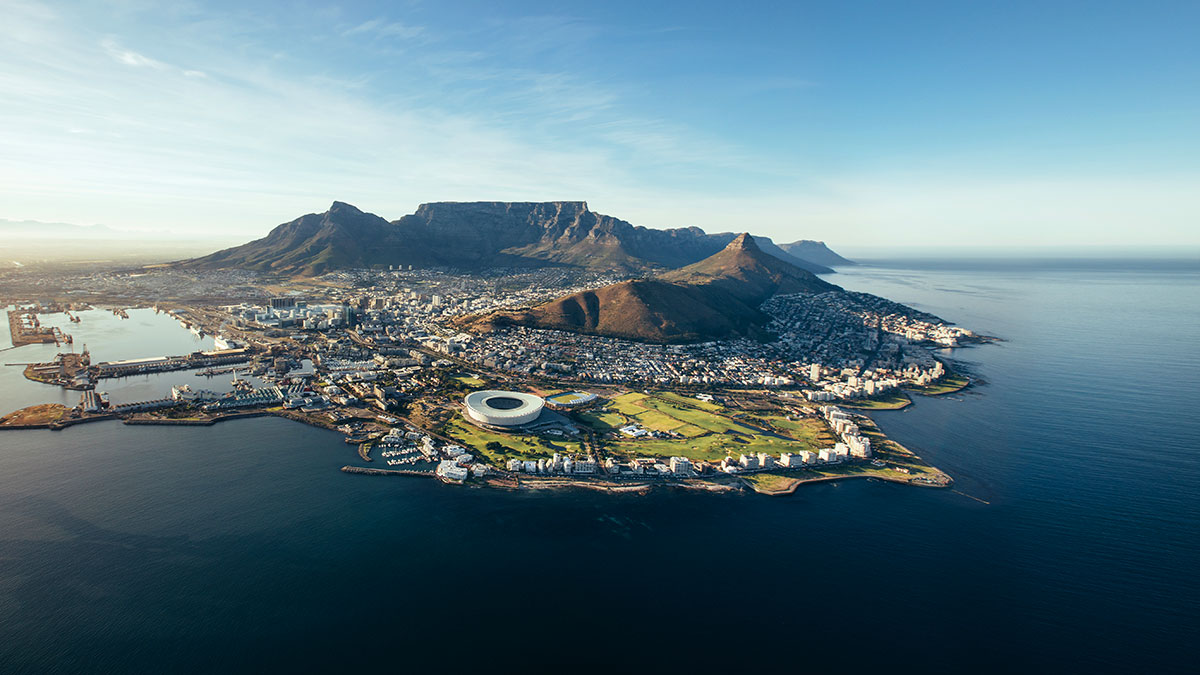 A city full of superlatives! By rights, Cape Town should be considered one of the most beautiful cities in the world. It's located at the foot of Table Mountain, from which you have a spectacular view over the city.

But that's not all. This cosmopolitan city on the Atlantic Ocean also has some fantastic beaches - each more heavenly than the next. There is plenty of variety - you can go surfing, diving, sunbathing, sightseeing or just watch the sun go down. Dazzling blue skies, palm trees, exotic lifestyle, art deco and the friendly, relaxed attitude of the locals mean you will fall in love with the city at first sight.

The Botanical Gardens in Kirstenbosch are among the largest in the world and are home to the most varied selection of flora anywhere in the world. The city boasts interesting museums and lively markets - pure folklore - in incomparable colors. The waterfront and the lively pubs on Long Street guarantee endless amusement, and trips to the varied surroundings, such as the Cape Peninsula or the Wine Country, prove to be an unforgettable experience.

The sounds of the muezzin, women with headscarves, minarets and mosques - not exactly a typical image of Cape Town. The magical Bo Kaap Quarter is one of the few historic quarters in the South African metropolis.

This is where the Islamic community, known as the Cape Malays as they are descendants of the slaves once brought in from the East Indies, live. Visitors are urged to respect their lifestyle. The pretty, peaceful district is very much in fashion, and is becoming increasingly popular. More and more people are discovering their fondness for the pretty little houses, most of which date back to the 18th century, and are settling here in the lovingly renovated and colorfully decorated buildings.

South Africa's fate was sealed in this historical institution - it was where the Apartheid laws were passed in the 1950s and 1960s, and it was 1990 before they were repealed. Nelson Mandela was elected president of the parliament in 1994, which heralded a new era in the country's history.

By calling in advance, you can follow the debates in house (August to December only) - a good opportunity to witness the politics of the new South Africa. There are guided tours through the Classicist building in the mornings Monday through to Friday (January to July).

Long Street is more a way of life than a street. A paradise for bookworms, rummagers, connoisseurs and discoverers. Wonderfully renovated houses gleaming in all the colors of the rainbow stand side by side with more dilapidated façades.

It is a magnet for the curious, the fashionable and the tourists, who browse through antique shops, junk stores and designer boutiques on the lookout for a bargain before seeking sustenance in one of the cool restaurants or Indian take-outs. There are art galleries for the aesthetics and fashionable discos for night owls - it appears to have everything! A cross-section of authentic Cape Town life.

You can get a taste of multicultural Africa in the Pan African Market. Traders from all over the continent come here to peddle their colorful range of pottery, baskets, musical instruments, sculptures, modern art and clothing - the choice is staggering.

Some people buy souvenirs, others immerse themselves into the experience and just drift from one stall to another over the three stories of the market. There is also a café where you can rest your legs, a hairdresser where you can get plaits woven into your hair and a dressmaker where you can get some of the wonderful fabrics made into something right away.

The South African Museum gives visitors a chance to experience the history of South Africa close-up. The huge skeleton of a whale impresses both the young and the old. There are exhibitions about various peoples of South Africa, such as the Bushmen - complete with amazing cave paintings - which give a wonderful insight into South Africa's past.

Natural and cultural history are not neglected either. There is also a planetarium, the ceiling of which is lit up by the glittering canopy of southern hemisphere stars. Various programs bring both young and old slightly closer to the heavens.

Diving among sharks, seahorses and other creatures of the deep is now possible thanks to Cape Town's window on the oceans. Visitors with a diving certificate can also come into direct contact with the underwater world, and those who are really brave can even dive into the impressive shark tank.

The largest aquarium in the southern hemisphere offers all visitors a real insight into the shimmering world of the seas. You can look at tiny creatures under a microscope, and you can even pick up other inhabitants of the sea. There are also video guides which tell you about the varied flora and fauna of the Indian and Atlantic Oceans.

Lively and exotic, chic and shimmering - what were once shabby old docks have now been converted into the “in” street for Cape Town's entertainment culture. The mighty sea is in front of it and the monumental Table Mountain behind it.

Bars, shops, cinemas, hotels, restaurants, glamor and nightlife - the waterfront offers everything to excite both tourists and locals alike. You can see the many different facets of South Africa in the museums and markets which are now seamlessly integrated into this brave new world. A spectacular place and an experience not to be missed.

The city's main landmark, and also one of the most spectacular viewpoints over the metropolis on the Atlantic Ocean, is Table Mountain. It rises over 3,280 feet above Cape Town, and is an absolute must for tourists. The cable car is the fastest way to get to the top, but the three-hour climb also has its merits. Even before you get to the top, you can enjoy some stunning views over the city, Table Bay and the Cape Peninsula. It is worth waiting for good weather before making the trip, but clouds can still draw up very quickly.

Around 1,500 types of plants, including some endemic plants, thrive on Table Mountain. The Fynbos flora, in particular, blooms in all colors between September and November and small, playful hyraxes jump around all over the plateau. The unique flora and fauna, which are severely endangered because of the large numbers of tourists and bush fires, are now protected as the mountain has been declared a national park.