Bermuda - Where Everything Screams "Holiday" 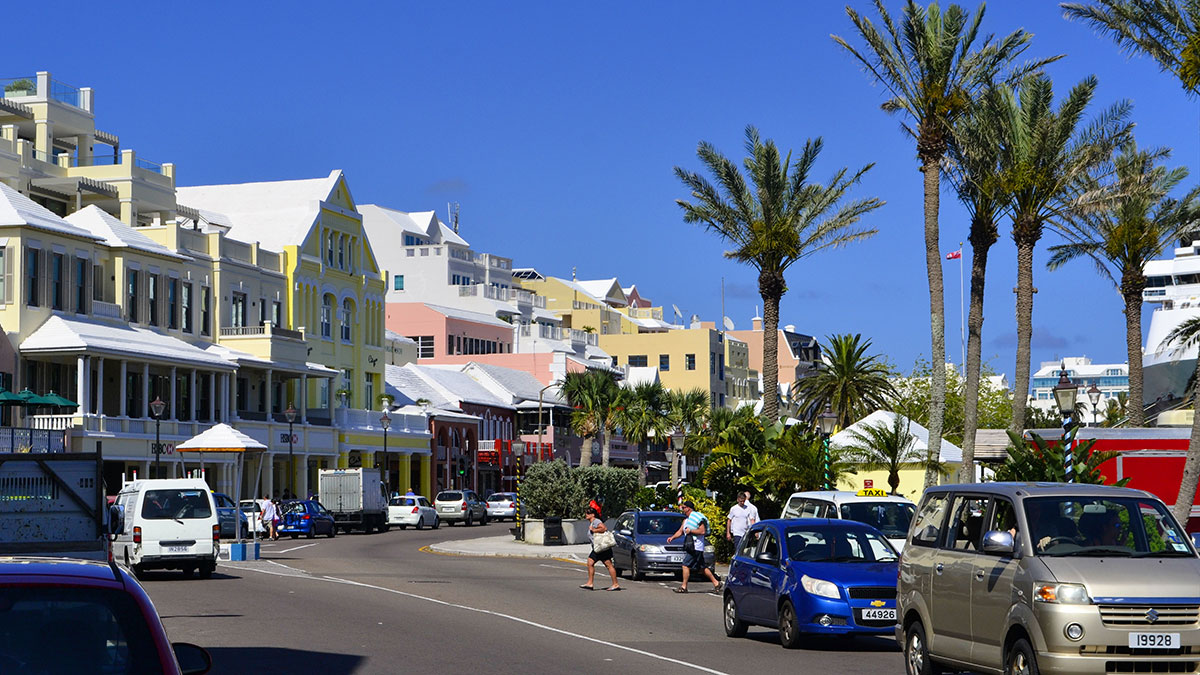 Bermuda shorts are a mainstay of the acceptable dress code here, even for serious and respectable occasions. That is, according to an illustrated brochure on the islands where you are likely to meet the director of a bank wearing a jacket with the shorts so typical of the islands. On these islands benefiting from the Gulf stream, everything screams “holiday”.

The 138 islands, of which only 20 are inhabited, lie in the Atlantic Ocean around 620 miles off the coast of North Carolina . Surrounded by coral reefs, they protrude up to 260 feet above the sea. 63,000 people live on the main islands linked by bridges and overpasses. With fine sand, pink shimmering beaches and turquoise blue, crystal-clear sea, this holiday paradise attracts divers in particular.

The image of the islands is often characterized by unusual superlatives. For example, the Bermudas boast the highest golf course in the world and the world's highest marriage rate. Bermuda is also the most opulent island on Earth. Discovered in 1503 by the Spanish sailor Juan de Bermudez, the islands were first occupied by English colonists in 1612. In 1684, the islands became a British colony and this can still be felt today in the Victorian houses and well-kept gardens. Queen Elizabeth II remains Head of State.

The Bermuda Aquarium provides an insight into the history and environment of the island. Equipped with an audio guide and headphones, you can start the tour by yourself or with the help of an expert guide. You can marvel at more than 200 species of fish and amphibians in the aquarium. However, the highlight must surely be the living coral exhibition on North Rock - the first of its type in the world.

The zoo is a close second. The over 300 birds, mammals and reptiles are not only a visitor attraction. The zoo also breeds animals and releases partly endangered species back into their natural habitat. Finally, the Natural History Museum is a meeting point for those interested in history, geology and geography. These rooms cover the volcanic origins of the island, soil conditions, climate and ecological development on the Bermudas. The Discovery Room, featuring games and puzzles, was designed for children. The museum also offers guided tours on which you can explore the fascinating flora and fauna of the island in the open air and discover hidden beaches and remote sections of the coast.

Bermuda is characterized by the finest beaches and crystal-clear water. Dreamy coral formations form the most beautiful reefs in the world. These are the most northern in the Atlantic and exist thanks to the warm Gulf Stream, which brings pleasantly warm water temperatures with it.

Swarming corals, colorful reef walls, a view of up to 200 feet and an animal world rich in different species will all make your heart beat faster. Not only that, sunken cargo and passenger ships, steamboats and submarines lie on the sea bed next to one another. The damaged frigates and galleons, up to 500 years old, are even more exciting since they are full of secrets. The most famous shipwreck in Bermuda, the Constellation, can be found on the outer reef. She sank there in 1943, fully laden with morphine and drugs. The most valuable of illustrious unique specimens have been found there. In 1955, Terry Tucker hid a golden cross studded with seven emeralds there, worth $200,000 at the time. Mysteriously, the cross disappeared 20 years later and its location remains unknown to this day - another unsolved mystery in the legendary Bermuda Triangle.

Two boys playing with a ball discovered the Crystal Caves by chance in 1907. While searching for their lost ball, they found not only the ball but also the unique stalactite caves 66 feet below ground. The beautiful stalagmite and stalactite formations, columns, magical pillar formations and an underground lake are very impressive. A narrow wooden bridge crosses it, unavoidably awakening the hidden caver in many visitors.

The lake fills up and empties with the tide and therefore provides a natural spectacle worth seeing. The illuminated visitor information is reflected impressively in the dark surface of the water. A guide accompanies tourists and backs up the visual effects with interesting information. However, it is not recommended for people suffering from claustrophobia – the narrow caves only allow restricted movement and can be very oppressive.

The dockyards on Ireland Island emerged under gruesome circumstances. Thousands of slaves died in the construction of the docks ordered by the British government in 1809. The British used this port for ship repairs and as a military base for nearly 150 years up to 1951. It was not until the Maritime Museum was opened in 1975 that the docks developed into a tourist attraction with a shopping center, restaurants and water sports center. Whether it’s a cappuccino in a café or partying in the clubs, you will have the time of your life in the busy docks area.

In the Maritime Museum, opened by Queen Elizabeth II in 1975, visitors will be amazed by the remains of sunken shipwrecks. Some exhibitions deal with the history of the island and seafaring. Shipwrecks, models and the uniforms of former seafarers give you an insight into the adventures of sea travel. However, the main focus is on the several hundred ships which have sunk on the island's reefs, on which the myth of the Bermuda Triangle is founded. In this legendary area between Florida, Puerto Rico and the Bermudas, 50 ships and 20 airplanes have gone missing without a trace since the middle of the 19th century.

Right in the northwest arc of the island, you will find a completely different establishment. At Dolphin Quest - a large basin within the old battlements - visitors can swim with dolphins. Children in particular love to stroke the friendly animals and get close to them.

However, you will be expected to pay for the privilege - it costs over $125 for half an hour of splashing around with the delightful sea creatures - although many people still go for it. Visitors are prepared to meet the dolphins by taking various courses. A lecture also enables them to learn about the animals and their habitat. Even children can go up to the mammals in a tank. There has long been scientific evidence of the positive effects of dolphins on people and on children in particular. This experience is therefore exciting for children, while still being safe, enjoyable and also educational.

Hamilton is the small but very lively capital of the Bermudas. Located at the eastern end of the Great Sound, it is also the most important port on the main island. The free port is one of the attractions in this city of 6,000 inhabitants. Don't miss the fortifications of the patriarchal Fort Hamilton with its huge cannons, impressive battlements and the Sessions House. The latter was built in 1817 and is currently the seat of the Parliament.

As well as a mile of shops and office complexes, this little city can also offer lots of good restaurants and bars. Here, and in numerous other nightspots, you should observe the local etiquette – that is, exceptionally, no shorts. Obviously this does not apply during the day and when visiting the beach. The 19th-century cathedral on Church Street is also worth a visit. For something a bit different, take a harbor tour or a boat trip to Somerset Island with its beautiful beaches.

St. George's, the most eastern island, and the city of the same name, are definitely the must-see of the Bermudas. The city dates back to 1609, when the Sea Venture became stranded and its castaways settled here. Not unjustifiably, it has since become a (UNESCO) World Heritage Site.

You can visit Deliverance II on Ordnance Island - a reconstruction of the ship which brought some of the castaways to shore in 1609. Built around 1700, Bridge House is a good example of Bermudan architecture. It is currently used as an art gallery. In King Street you will find the Old State House, the oldest stone house on the island. The building, constructed in 1620 in Italian style, formed the model for the subsequent construction of houses on the Bermudas. Museum fans will be satisfied by the St. George's Historical Society Museum. Built in the early 18th century, the complex houses documents, old letters and relics, including some from the Civil War. Between these sights, lovely bars such as Clyde's Café or the Pub on the Square will lure you in for a breather.

Once a railway, today the site is one of the most beautiful hiking trails on the islands. The historical Railway Trail runs from east to west diagonally across the main island and winds through a fascinating array of plants. It offers hikers and runners a fantastic insight into the island world away from civilization, leading past abandoned stations, light towers and old Bermudan houses.

Until shortly after World War II, this railway line was the only connecting route on the island. However, after a system of buses and cars were introduced on the island, the railway became obsolete. In 1980, the former track was converted to a hiking and cycling path. Since then, nature lovers have been able to enjoy quiet, idyllic and unforgettably stunning views of the island, but only on the higher embankments. The path itself is actually very flat. The lack of steep inclines and barricades therefore makes it ideal for jogging.