Berlin - City of Contradictions and Contrasts 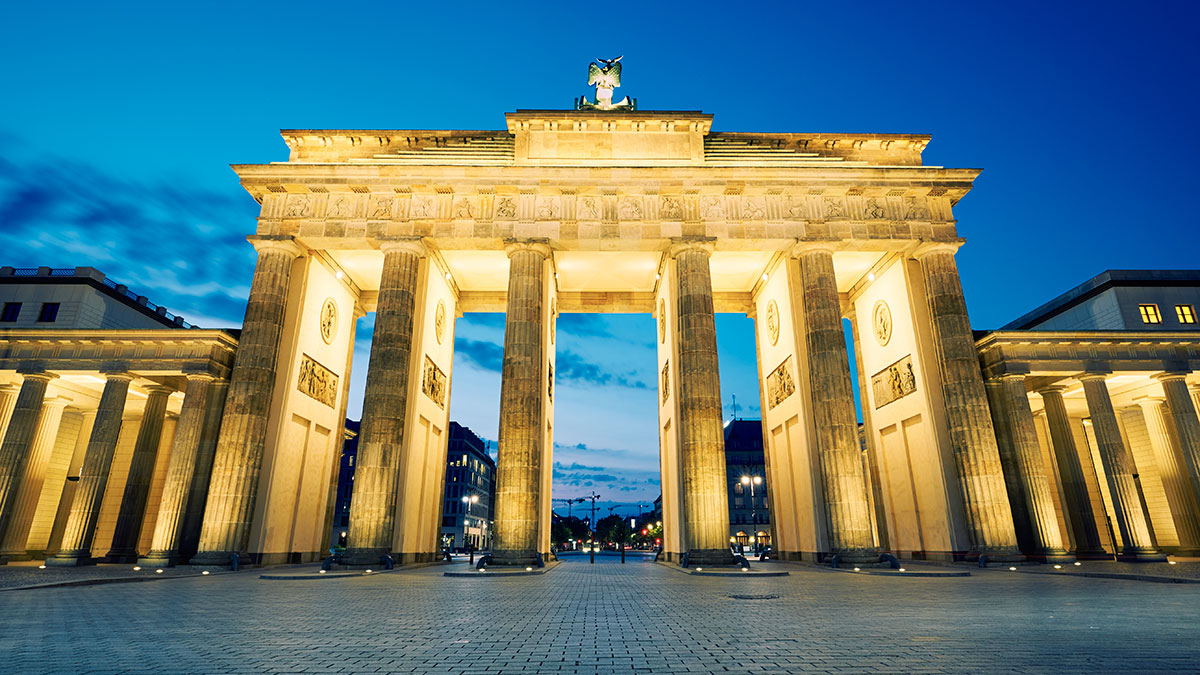 Berlin has undergone rapid change since the Wall came down in November 1989. The move by the government and parliament from Bonn to the River Spree in 1999 conspicuously restored political significance to the capital of the reunited Germany. The glass dome of the Reichstag building, with its viewing gallery 130 feet above ground level, a stroke of genius by Sir Norman Foster, has become a new trademark of the city.

Today, Berlin is more than ever a city of contradictions and contrasts. Famous international architects are putting their stamp on the Mitte district of the city, while other areas still contain row upon row of Communist-era prefab apartment blocks. Typical Berliners live only a stone's throw away from anarchists, the nouveau riche almost rub shoulders with welfare recipients.

The almost overwhelming wealth of cultural activity includes three opera houses and the Berlin Philharmonic Orchestra (representing the pinnacle of the musical iceberg), more than 150 museums, innumerable art galleries and an incredibly varied and glamorous nightlife. That means there is something for everyone to discover. And with both the different scenes and the cityscape changing so quickly, Berlin is worth visiting again and again.

The Brandenburg Gate and Pariser Platz

Built by C. G. Langhans in 1788-1791 and modeled on the Propylaea (the gateway to the Acropolis), the Classical-style Brandenburg Gate at the end of the magnificent Unter den Linden boulevard has repeatedly been at the forefront of historical events. Its allegorical group of sculptures, Gottfried Schadow's Victory and Quadriga, pays homage to Frederick the Great as the prince of peace. Napoleon took the sculptures to Paris after defeating the Prussians, but they were returned again in 1814, whereupon the olive wreath in the goddess's hand was replaced with the Prussian eagle and Iron Cross. When the Berlin Wall was built, the Brandenburg Gate became a symbol of the division of Germany until its reopening in the autumn of 1989 heralded German reunification.

After World War II, Pariser Platz lost its significance entirely on account of its proximity to the Wall. Now, however, it is taking shape anew. The Hotel Adlon set an elegant example. Reopened in 1997, its foyer attempts to recreate the atmosphere at the hotel in the 1920s, and together with the palace of painter Max Liebermann, rebuilt by the architect Josef Paul Kleihues, the Adlon gives the square its own particular stamp.

The eight interconnected early 20th-century inner courtyards of the residential and business complex were allowed to become dilapidated during the GDR era and had to undergo costly extensive renovation after the fall of the Wall. The Art Nouveau façades have been restored - the first courtyard is particularly interesting to see - and boutiques, designer shops and cafés have moved into spaces which once housed offices and workshops. When the flow of tourists abates towards evening, the neighborhood comes alive again, and the bars, restaurants and cinema, as well as the cabaret theater, the Hackesche Hof Theater and the Sophienclub, attract Berliners in particular.

This 2.2 mile shopping boulevard and its side streets offer a colorful variety that make strolling down it a pleasure: department stores and restaurants, boutiques and cafés, luxury hotels and theatres, fascinating museums and art galleries, luxury goods and junk. Originally a bridle path leading to the hunting lodge of the Kurfürst (Elector) in Grunewald, it developed into a magnificent boulevard lined with stately town palaces. Not even the loss of historical buildings during World War II robbed it of its unique flair. The ruined neo-Romanesque steeple of the Kaiser Wilhelm Memorial Church was left standing beside a new octagonal building by Emil Eiermann as a memorial to peace and reconciliation.

The Kaufhaus des Westens (KaDeWe), a large department store built on Wittenbergplatz around 1900, has preserved its reputation as a consumer's paradise. Its huge food department, in particular, enjoys cult status.

Karl Friedrich Schinkel planned to create a center of art and classical studies modeled on ancient temple areas. Five classical buildings on one of the islands in the Spree formed a unique ensemble. In 1999 the UNESCO bestowed the area the greatest possible accolade by designating it a World Cultural Heritage site. Restructuring and rebuilding work were needed to bring together the many collections scattered across the city.

The Alte Museum, built by Schinkel in 1825-1830, houses the Classical Collection and masterpieces from the National Gallery. The newest part of the building (1878-1886), the Pergamon Museum, contains Classical and Islamic art (e.g. the Pergamon Altar and the Market Gate of Miletus). The Neue Museum (comprising the Egyptian Museum and the Museum of Pre- and Early History) is being rebuilt. The Bode Museum (Late Classical and Byzantine Art, coin cabinet and a collection of sculptures) is currently closed. The Alte Nationalgalerie was ceremoniously reopened on December 2, 2001 after extensive renovation.

Once a desolate, war-ravaged 16.5-acre wasteland in the shadow of the Berlin Wall, this square has become a symbol of the new, reunified Germany. A new urban center has arisen on this, the largest building site in Berlin. The centerpiece is the complex of high-rise buildings designed by today's star architects for multinational corporations Sony (Helmut Jahn), Daimler-Chrysler (Renzo Piano) and ABB (Giorgio Grassi), containing offices and cultural areas, bars and restaurants, apartments and hotels. The Sony Center, which opened in January 2000, is dedicated entirely to the silver screen. In addition to an IMAX 3D cinema, it also houses the Filmhaus, bringing together institutions such as the German Film and Television Academy and the Berlin Film Museum under one roof for the first time.

Other attractions include the noble Grand Hyatt Hotel, the Musical Theater and the casino.

One of the most elaborate of the splendid Wilhelmine-era buildings, the Reichstag was erected in 1884-1894 by Paul Wallot in Italian Late Renaissance style and served as the meeting place of the parliaments of the German Reich and Weimar Republic. From the very beginning, it was a thorn in the side of reactionary forces. William II disparagingly referred to it as a "gossip shop", the Nazis set it on fire.

After World War II it was declared an outpost of the federal parliament in Bonn. However, it had no real function until the reunification of Germany and the decision by the German Parliament to move from Bonn to Berlin. After being spectacularly wrapped by the American artist couple Christo and Jeanne-Claude in 1995, it was transformed into the new national parliament for a reunited Germany according to an "open" modernist design by British star architect Sir Norman Foster. The deliberately modest plenary chamber is transparent on all sides and even the huge dome, which is now a real tourist attraction, is made of glass and contains two spiral walkways, so that the populace can look down on its parliamentarians.

The wide Baroque dome of this, the most beautiful of the Hohenzollern palaces, was built in the 17th and 18th centuries and named after Sophie Charlotte, the wife of Frederick I. In addition to the royal couple's quarters in Frederick the Great-style Rococo, it houses the Gallery of the Romantics (C. D. Friedrich, Carl Blechen) in the new wing added by Knobelsdorff. The extensive palace gardens are a jewel of formal Baroque and informal English landscape gardening, with a mausoleum to Queen Luise, the Schinkel pavilion and the Belvedere (porcelain collection).

The beginning of Schloss-Strasse is marked by two domed buildings housing interesting museums: the Egyptian Museum, one of the most important of its kind (including the bust of Nofretete), and the Berggruen Collection of works by modern painters (Cézanne, Picasso, etc.). The Bröhan Museum occupies a late 19th-century former barracks, and has a collection of paintings and graphics on the Berlin Secession, in addition to everyday objects from the Art Nouveau and Art Déco periods.

The Tiergarten, with its 500 acres of parkland and 16 miles of footpaths, has become the largest recreational area in Berlin, transformed in the 19th century by P. J. Lenné from the Kurfürst's animal enclosure into an English-style landscape garden. The most colossal of its numerous monuments is the Siegessäule and its gilt Victory, erected during the reign of William I and disrespectfully dubbed "Golden Elsa" by the local Berlin population. The lookout platform affords a magnificent panoramic view of the city. The northwestern section of Tiergarten contains the Early Classical complex of Bellevue Palace, surrounded by the charming Bellevue Park. Built in 1785 for a brother of Frederick the Great, it has served as the official residence of the German President since 1993.

Frederick William IV's menagerie formed the basis for the 84-acre Zoological Gardens, whose attractive enclosures were designed to imitate the architecture of the animals' respective countries of origin. Since its opening in 1844, Germany's oldest zoo has developed into one of the one of the most varied collections of animals in the world.