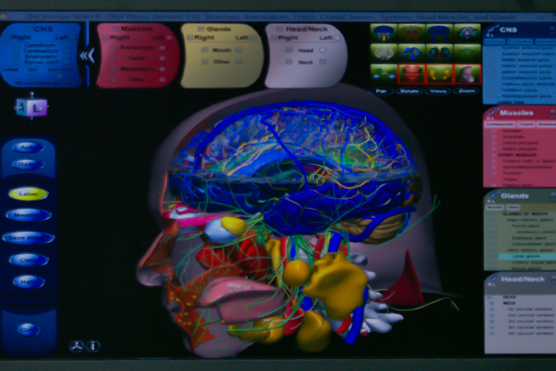 3-D brain atlases for clinical use

3-D brain atlases for clinical use.

Nowinski's brain atlases are the result of combining multiple brain scans into a 3D representation. Extremely large amounts of data are involved: A single brain scan contains about 20 million pixels. To deal with the tremendous complexity, Nowinski converted the scans into 3 000 pieces ; each individual piece is additionally compressed so that the atlases can stay affordable and will work even on a tablet.

Nowinski developed 34 different brain atlases that are used for research and education, as well as for the diagnosis, prediction and treatment of brain disorders such as Parkinson’s, stroke and psychiatric conditions. His two generations of atlases, “Cerefy” and “The Human Brain in 1492/1969 pieces”, are considered the most advanced and beautiful brain atlases on the market and have helped treat hundreds of thousands of people so far.

Societal benefit:
Neurological disorders are responsible for an estimated 12% of deaths worldwide, and a large portion of these deaths are the result of cerebrovascular disease. As the planet's population ages, incidence of brain trauma and disorder will further increase. Consequently, the market for interactive technologies to explore and treat the brain will increase both in its size and its potential to dramatically improve and save lives.

Economic benefit:
ASTAR has sold more than 9 000 atlas copies on CD-ROMs; its atlases are installed on 1 000 surgical workstations with more than 1 900 registered users. As of 2013, the number of trusted atlases installed on workstations rose to 1 200 globally. Nine image-guided surgery companies have taken out licenses on the “Cerefy” atlases, including Philips Medical Research, Medtronic and BrainLab.

The Cerefy brain atlases operate in the market of neurosurgical products, which exceeded US $2.7 billion in sales in 2013. The growing burden of brain disorders and trauma on the healthcare systems of mature markets has compelled manufacturers to introduce cost-effective devices for the treatment of neurological disorders, creating a great deal of interest in equipment that assists in research and development.

rain atlases, are the product of massive amounts of different kinds of images and data. Neuroinformatics data allow researchers like Wieslaw Nowinski to take a variety of brain scans and combine them to create sophisticated maps. However, Nowinski has gone a step further to generate three-dimensional brain models users can manipulate and navigate in different ways, tailoring different atlases for different purposes: from the exploration of the brain’s vascular system to the diagnosis of diseases such as Alzheimer’s. Images of specific patients are “superimposed” on one of Nowinski’s atlases and the corresponding tissue structures are compared in the two cerebral hemispheres in order to pinpoint deviations from healthy tissue. In addition, the atlases can also guide neurosurgeons to the specific area in which the electrodes have to be placed for deep brain stimulation.