Back in the 50's, any living creature had the chance of winding up as a giant monster in a cautionary tale about nuclear energy. Every animal has been covered. Not even inanimate objects are safe from cinematic subversion. "The Magnetic Monster" is a sign of one of two things. Either the writers were science majors or studios were getting desperate trying to create beasts that audiences had yet to take in. "Monster" involves a killer (wait for it) isotope. The plot actually has scientists being menaced by a radioactive element. Magnetic fields are thrown into ataxia when a new element is formed that turns raw electricity into matter. The isotope grows as it feeds on energy, which pleats its appetite. These feeding cycles of implosion magnetize the element and cause it to give off dangerous amounts of radiation.

Boo! Obviously, this isn't your typical creature feature. It would take an atypical horror goof to enjoy this flick, and luckily, I am typically atypical. This sci-firecracker may not contain conventional thrills, but it's captivating in a very cerebral way. Even if you don't understand what the hell the characters are talking about, the dialogue is still interesting on a curious level. The pace is kept thumping by a strand of plot devices that supplant any real character development. Richard Carlson is the only recognizable face here. He played the greedy prick in "Creature From the Black Lagoon." He does a swell job of pretending to be intimidated by an element, I suppose. Obviously, no one else stands out amongst the cast of stiff white people.

The climax is intercut with footage from a 1934 German film called "Gold." This footage doesn't dampen the ending since it comes from such an obscure place. Actually, "The Magnetic Monster" ends on a suspenseful note. The spiked resolution comes as a relief in an otherwise monotone film. If the sci-fi geek inside of you is more conspicuous than your inner horror geek, than you would be well-advised to snare this unsung cult conversation piece. 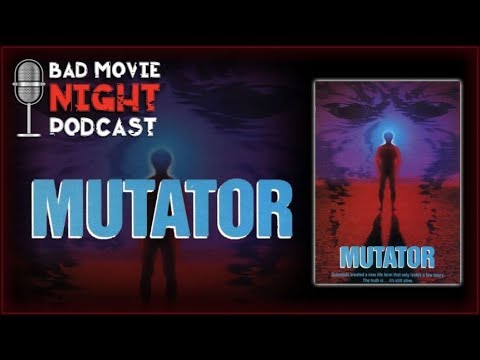 The only people who have seen "Mutator" are those fortunate enough to have been familiar with Brion James. James was a well-renowned b-movie regular. I don't know how well-renowned a cult actor can be, but you get my drift. His name isn't up there with Bruce Campbell or even Tom Atkins, but his resume is just as impressive. James died in 1999 of a heart attack. Since his untimely death, his proverbial stock has gone up. I haven't seen many of his films, but I did purchase "Mutator" on his name value alone. This is a lesser creature feature, but James gives a performance fit for an "a-movie." He plays against type as an intellectual scientist who ends up being the levelheaded straight man. If only cult actors like James were given lead roles more often.

Our storyline isn't as banal as I was expecting. Genetic experiments on animals have unwittingly propagated a litter of mutated kittens. These frighteningly feral pussies grow up to be 7-foot nightmares. Imagine a pokerfaced "Sleepwalkers." The plotline could have made for a fun time at the movie house, but the first 75 minutes are cloying. In other words, this flick is more boring than my sex life. That's boring. Like, seriously. We follow three knucklehead activists as they attempt to extricate their furry friends. None of the characters are interesting, save for James. "Blade Runner" this ain't. The creature design is passable, but we only see bits and pieces of it. I'm not sure where the budget went, unless it was spent on the all-star cast of nobodies. And God said, "Let there be light! Oh, before you turn the light on, could you take Mutator back to the video store for me?"

That's right. Even God is a Brion James fan. And he has tons of late fees piled up at Hollywood Video.